Good morning. President Trump and the first lady have tested positive for the coronavirus. She says they are “feeling good,” but the news adds new chaos to the campaign. 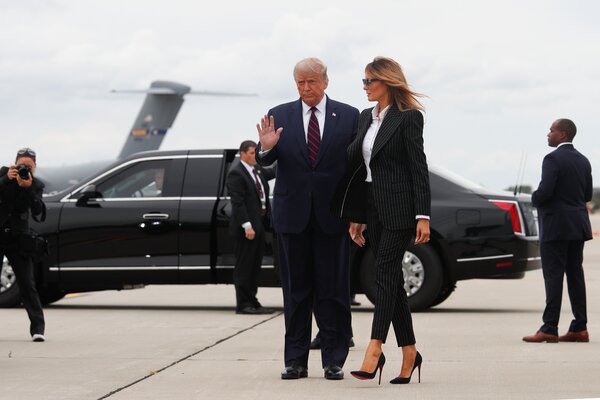 President Trump and his wife, Melania, have tested positive for the coronavirus, he announced in a tweet shortly before 1 a.m. Eastern today. Afterward, she added that they were “feeling good.” The White House did not say whether they were experiencing symptoms.

The diagnosis is the latest piece of stunning news in a year that has been full of them. It creates uncertainty about the president’s health and his ability to campaign 32 days before Election Day, when voting has already begun in some states.

It is unclear how the couple contracted the virus. One possibility is that they did so from Hope Hicks, a close Trump adviser who traveled on Air Force One with him on Wednesday and began feeling sick that day. She tested positive Thursday.

Joe Biden’s campaign has made no announcement about his condition. Biden appeared on an indoor stage with Trump for 90 minutes, at Tuesday’s debate. They stood more than six feet apart and, because of the pandemic, did not shake hands before or after the debate.

Some experts thought Biden was unlikely to have contracted the virus, given the timeline and his distance from Trump. Others were less confident of that.

The White House did not initially announce that Hicks had tested positive. (Bloomberg News reported it.) Instead, the White House appeared to put other staff members and visitors at risk of the virus by continuing to operate as normal. Kayleigh McEnany, the press secretary, who had also been on the plane with Hicks, held a briefing yesterday with reporters without mentioning it or wearing a mask.

Trump has repeatedly downplayed the risk of the virus and behaved in ways that public health experts have said risked spreading the virus. He has refused to wear a mask in public and questioned its effectiveness. He has held crowded rallies where attendees did not wear masks. Many of his staff members did not wear them at Tuesday’s debate, even after medical personnel there asked them do so.

The Trumps will quarantine in the White House for an unspecified period of time, and his doctor said he could carry out his duties “without disruption.” But his campaign schedule will almost certainly be canceled, at least for the immediate future. The status of the next presidential debate, a town hall scheduled for Oct. 15 in Miami, is unclear.

Expressions of concern and good wishes for the Trumps’ speedy recovery came from leaders in Russia, India, Britain and other countries.

Stocks in Europe and Asia have fallen modestly today.

Nicholas Kristof, Times Opinion columnist: “Best wishes to President Trump and the First Lady. Whatever one thinks of his policies, I hope we can be civil, avoid snark, seek lessons and wish them both a swift recovery.”

Kelly O’Donnell, NBC News: “Not since Ronald Reagan was shot in 1981 has there been so clear a threat to the health of an American President. A serious moment for the country.”

Ashish Jha, dean, Brown University School of Public Health: “This is a nightmare. COVID19 is a serious infection, especially for someone who is older like Mr. Trump. I can’t believe he was infected. This is a total failure by [the White House] team to protect the President.”

Peter Nicholas, The Atlantic: “In my reporting trip to the White House in August, I saw aides at their desks without masks, aides talking to one another in small offices without masks. It did not have the look of a White House that was worried about transmission of the virus.”

The Times will publish the latest updates, all day, here. A photo essay tracks the president’s movements this week.

House Democrats passed a $2.2 trillion coronavirus relief bill, a sign that they are pessimistic about reaching a deal with top Republicans on a bipartisan measure.

The virus is surging in Wisconsin: Of the four metropolitan areas in the U.S. with the worst outbreaks, three are in the state. And it has recorded its largest numbers of daily deaths recently.

New York City has opened all its public schools for in-person classes. But researchers at N.Y.U. worry the system’s testing plan is not aggressive enough to stop a large outbreak.

Philadelphia Democrats will soon begin going door-to-door to encourage people to vote in person. The shift reflects concerns that Pennsylvania may reject many mail ballots.

Gov. Greg Abbott limited each Texas county to one drop-off location for completed mail ballots. The move would force Harris County, which is larger than Rhode Island, to abandon 11 locations. Abbott cited election security; Democrats said he was trying to reduce voter turnout.

Azerbaijan and Armenia are engaged in their most severe military conflict in decades, over a disputed territory on Europe’s eastern edge. Politico has an explainer.

The Trump administration proposed cutting refugee admissions again next year, to no more than 15,000, down from the 110,000 approved slots in 2016.

The Common Application for colleges has stopped asking students to report whether they have been subject to disciplinary action, citing disproportionate rates for Black girls.

The W.N.B.A. finals begin tonight, featuring two of the league’s biggest stars: A’ja Wilson of the Las Vegas Aces and Breanna Stewart of the Seattle Storm.

From Opinion: A new project explores the Amazon rainforest. A good place to start: this visual story on how human development is wreaking havoc on the region, and on Earth’s climate.

Lives Lived: In an era when women had a difficult time being heard in academia, the scholar Renée C. Fox was instrumental in creating the field of medical sociology. She has died at 92.

IDEA OF THE DAY: The Baker trap

James Baker had quite a career: the only person to serve as the chief of staff to two presidents; the Treasury secretary who shepherded the sweeping 1986 tax-reform law; and the secretary of state who helped successfully wind down the Cold War.

Much of Baker’s success stemmed from his ability to forge compromise, often along bipartisan lines. That’s a central theme of a new biography, “The Man Who Ran Washington,” by Susan Glasser of The New Yorker and Peter Baker (no relation to the subject) of The Times.

The book also offers clues about how James Baker’s Republican Party has changed so much since his retirement. In recent years, he faced a wrenching decision about whether to break with the party over Trump’s nomination. He chose not to speak out, partly to protect his standing within the party.

It has been a familiar story during the Trump presidency, as dozens of members of Congress criticize the president in private, sometimes disdainfully, but support him publicly. Baker’s “silence in the face of Trump’s outrages reflects the broader complicity of the so-called ‘Republicans who know better,’” Samantha Power, the author and diplomat, wrote in her review of the book.

Power called the book “enthralling.” The Wall Street Journal, in its review, said the book had “the feel of a novel.”

Leeks, carrots, celery, turnips and of course, potatoes (or any other root vegetables you have on hand) are the key to this cozy vegetable soup. Dump the ingredients into a pot, simmer and then blend until silky smooth. Serve with bread.

Our weekly suggestion from Gilbert Cruz, The Times’s Culture editor:

“Not everything that is faced can be changed,” wrote the author James Baldwin, “but nothing can be changed until it is faced.” It’s a line that is said near the end of “I Am Not Your Negro,” one of the most transfixing documentaries I’ve seen in years and a rare movie that’s available on several of the major streaming services.

In a voice-over, Samuel L. Jackson reads from an unfinished Baldwin book about Martin Luther King Jr., Malcolm X and Medgar Evers. Onscreen, we see archival footage of those men and of Baldwin himself, in appearances on talk shows and from his famous 1965 debate with William F. Buckley.

I have watched this film every year since its release in 2017. It’s a lecture and an intimate letter, a reminder that to change the future, you must first face history.

For many young music fans, Anthony Fantano’s word can make or break an artist. He has reviewed songs and albums on his YouTube channel, The Needle Drop, for more than a decade, drawing more than two million subscribers. And he has helped bring a dying art form — the record review — to a new audience.

“With the music magazine landscape all but decimated, veteran bloggers scraping to get by and survivors like Pitchfork and Rolling Stone subject to corporate overlords, Fantano’s D.I.Y. bedroom model feels increasingly like the future,” the Times pop music reporter Joe Coscarelli writes in a profile.

Almost 35 years ago, Nintendo unveiled Super Mario Bros., the video game that turned its titular high-jumping plumber into a star. Here are 35 facts about Mario to celebrate.

In the latest Modern Love, a woman saw her romantic future in the movie “Bend It Like Beckham,” but her future had other ideas.

Here’s today’s Mini Crossword, and a clue: Sound before “Bless you” (five letters).

Or try this week’s news quiz.

You can find all of our puzzles here.

Thanks for spending part of your morning with The Times. See you on Monday. — David

P.S. The word “mumblegore” — a genre of low-budget horror movies — appeared for the first time in The Times yesterday, according to the Twitter bot @NYT_first_said.

Today’s episode of “The Daily” is about Trump’s coronavirus infection. On “The Argument,” Opinion writers discuss the first presidential debate and Trump’s taxes.

Lalena Fisher, Ian Prasad Philbrick and Sanam Yar contributed to The Morning. You can reach the team at themorning@nytimes.com.

Opinion | Remember the Homeless Chess Champion? The Boy Is Now a Chess Master.

By Nicholas Kristof Opinion Columnist Once upon a time a 7-year-old refugee living in a homeless shelter sat down at a chess board in school and learned how to play. His school then agreed to his mom’s plea to waive fees for him to join the chess club. Source: Read Full Article

Opinion | Where Is the Smithsonian Museum for American Latinos?

Our stories still don’t have a permanent home in our nation’s capital. By Ileana Ros-Lehtinen and Ken Salazar Ms. Ros-Lehtinen and Mr. Salazar are advocates for the National Museum of the American Latino Act in the House of Representatives. The National Mall in Washington is where we inaugurate presidents, march for change and learn about […]

This is another News Portal > Politics > ‘But Labour now backs Brexit!’ Lammy skewered for ‘foolish’ Boris attack over Biden win