The Chancellor of the Duchy of Lancaster who runs the Cabinet Office at the heart of government and is responsible for the Brexit talks, has given his clearest warning yet that Britain will happily walk away with no deal in a few weeks time. He mocked Brussels for being reduced to “kidology” to give the impression Britain was compromising when it was Michel Barnier’s team having to make concessions.

Mr Gove was speaking to Tatton MP Esther McVey in an exclusive interview for the Blue Collar Conservatism/Daily Express virtual conference this week.

The senior cabinet minister also had good news for people in the coronavirus crisis by assuring the country it would be able to celebrate Christmas.

He attacked Brussels for its bad faith during Theresa May’s premiership when Britain tried to be accomodating in the talks.

He said: “In the past with some of the negotiations we have had with the EU we bent over backwards to be accommodating and we didn’t get the benefit of the doubt as a result.

“So now we are going to be absolutely crystal clear with the EU as we have been over the course of the last few weeks. 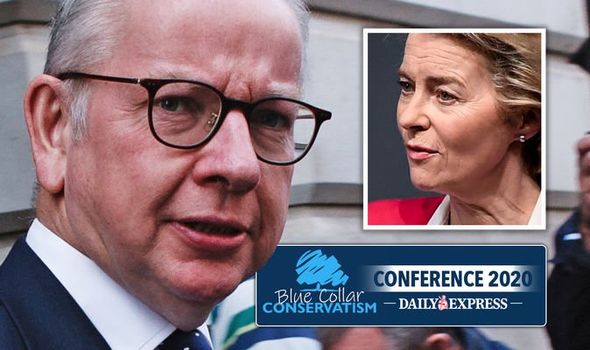 “Look if you are not going to talk turkey with us that’s fine, we can leave, we can say that’s it, no negotiated outcome we are ready come what may.”

He also dismissed misinformation from the EU that Britain is conceding in a number of areas.

He said: “The EU has this sort of kidology approach. They try to use tactics to make voters in Britain and British politicians worried. I think one of the reasons they are coming out with this now is that they know in these negotiations we have stood firm throughout.

But after four long years since the referendum, Mr Gove, who was part of the Vote Leave team which won, said he could understand people’s frustration.

We are going to be absolutely crystal clear with the EU

“I can completely understand that there are some people who looked at the past three years and say look we voted in 2016 when are we eventually going to get the end of this process. Well it is coming on December 31, Boris couldn’t have been any clearer.

“We wouldn’t have a majority if it weren’t the case that blue collar working class voters across the country had voted for Boris. We know we have got to deliver on that promise, there is no turning back.

“We will absolutely make sure, whether or not we get a deal with the EU in the next few weeks, we are out. That is it. December 31, no single market, no customs union, we take back control of our borders, we have a points based immigration system, we are able to spend our money on our priorities on the NHS and making sure people’s jobs are protected.”

He also vowed that there would be no compromise on fishing with Brussels still demanding access to fishing in British waters.

He said: “There’s no way we are going to back down on fishing. My dad ran a fish merchant’s business, that business went to the wall in the 1980s as a result of the eU and their common fisheries policy so it’s personal for me. 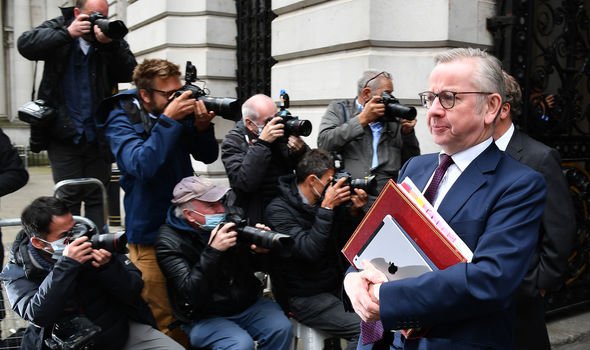 “But the PM and [UK chief negotiator] David Frost have been crystal clear with the EU, these are our waters, these are our fish, we are going to decide who has access to our waters on our terms. That’s what you would expect any independent country to do.”

Mr Gove also praised the working class Blue Collar voters across the country who helped deliver Brexit and backed the Conservatives in December to win an 81 seat majority on a promise to “get Brexit done”.

He pointed out that government critics of initiatives like the Internal Market Bill to protect the integrity of the UK were welcomed by people around the country but criticised by “BBC commentators and the SW1 bubble”.

He went on: “Esther, Blue Collar Conservatives is an amazing initiative. What you’ve achieved is fantastic.

“There have been hundreds of thousands of people who’ve been tuning in to your broadcasts. That’s great.

“I think one of the most important things that we need to do over the course of the next four years is remember who voted us into power. Our friend Eric Pickles, our chum, used to say, ‘Dance with the one who brung you.’

“In other words, make sure that you keep your promises and that the people who put you into power and gave you responsibility are at the forefront of your mind. Well, we know it’s the working class blue collar backbone of Britain that gave us that majority so we’ve got to keep the faith.”

The Cabinet Office has also been coordinating the coronavirus response and he insisted that British common sense will see the country through while ensuring that the country will be able to celebrate Christmas.

He said: ““I think we all know that we’ve got to control the virus in the interests of the vulnerable. That means that all of us have to make sacrifices. 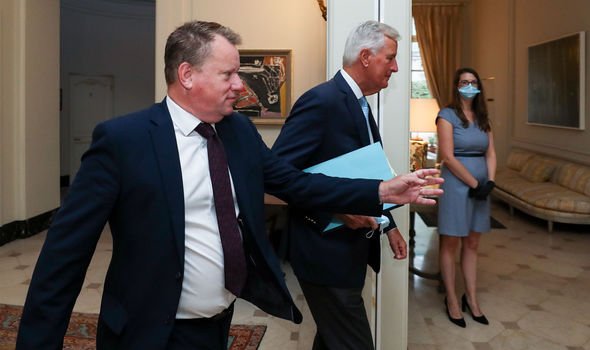 “But we’re well aware that we have to be vigilant in making sure that we protect family life; that we need to make sure that we deal with the virus now so people can enjoy Christmas together.

“Those sacrifices are real but most of us want to be in a situation where we’ve managed to control the virus, life can return to normal and the good thing about people across Britain is that they are commonsensical.

“One of the things that I learned in politics is you can get a better sense of what the right policy is by trusting the common sense of the British people than by paying attention to some of the commentators who are well-paid critics but who have never had to cope with the real life decisions that millions of blue collar and working class voters have to cope with every day.”

Andrew Bridgen has been kicked out of the 18th-century property he lived in with his wife, Nevena, and son. Mr Bridgen had accused his family’s vegetable company, AB Bridgen, of forcing him out. The company, owned by his estranged younger brother Paul Bridgen, accused Mr Bridgen of not paying rent, water, or electricity bills, according […]

How a Buzzy Cryptocurrency Fizzled

This is another News Portal > World News > Explainer: The case for Trump’s impeachment – and the case against it