Washington, DC – US President Donald Trump’s nomination Saturday of a new Supreme Court justice and his comments about voting integrity have already significantly altered the political discussion during the final weeks of the presidential campaign.

Trump, almost certainly, believes that shifting the focus away from the COVID-19 pandemic onto other issues that provoke political battles will boost his prospects.

But there is evidence to suggest that forcing these contentious topics into the conversation as Americans get ready to vote on November 3 might not result in the payoff he and Republicans are hoping for.

For instance, a Washington Post-ABC News poll out on Friday reveals that only 38 percent of Americans think Trump and the current Senate should confirm a new Supreme Court justice, while 57 percent say the decision should be left to the winner of the presidential election and the incoming Senate.

Aside from the argument over whether Trump is rushing to fill the vacancy, Democrats are clearly going to focus the discussion on three topics: abortion rights, healthcare and the coming conservative makeup of the court.

And on all three of those issues, Trump is facing some pretty stiff headwinds, according to recent polling.

Fulfilling a promise to his conservative Republican base, Trump’s Supreme Court nominee, federal judge Amy Coney Barrett, is expected to be anti-abortion rights, striking fear in Democrats who worry that the top court’s Roe vs Wade decision that established a woman’s right to have an abortion is in peril if the court ends up with a 6-3 conservative majority.

Democrats, a large majority of whom support reproductive rights, are making sure this becomes a political rallying cry in the final 40 days of the campaign.

“We are here to protect the rights of women, their rights to their own body, their rights to choose,” Senate Democratic Leader Chuck Schumer said this week, adding that “would all go down the drain” should Trump be able to appoint his Supreme Court choice before the election.

Sixty-one percent of Americans believe abortion should be legal in all or most cases, according to a 2019 Pew Research Center survey, while 71 percent do not want to see Roe vs Wade overturned, including 50 percent of Republicans or Republican-leaning Americans surveyed. 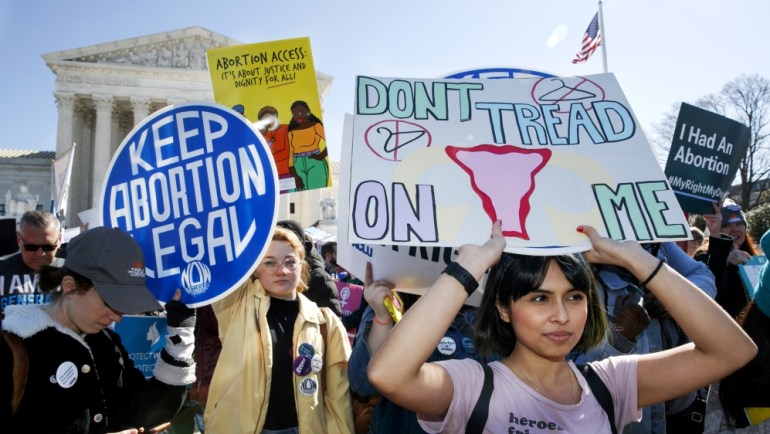 A 2019 Pew Research Center survey found that 61 percent of Americans believe abortion should be legal in all or most cases [File: Jacquelyn Martin/AP]Polling indicates that Trump’s support from women voters has lessened significantly since 2016. Drawing a lot of attention to an issue of keen importance to women – and one on which he takes the opposite view than a majority of them – shapes up as a sure political risk.

In addition, a pollster for Democratic presidential nominee Joe Biden argues the focus on Roe vs Wade will energise young voters, a group that tends to vote Democratic but lags in turnout every election.

“If you want something to fire up young people who weren’t all that interested this year, this is it,” John Anzalone told The New York Times, which pointed out that his research suggests that even apolitical young voters understand abortion politics. “They know Roe v. Wade.”

Democrats, including Biden, are tying Trump’s nominee to the repeal of the Affordable Care Act (ACA), an issue the court will be dealing with later this year.

“In the middle of the worst global health crisis in living memory, Donald Trump is at the Supreme Court trying to strip health coverage away from tens of millions of families,” Biden said last week, trying to link two issues Trump is struggling with in recent polls: COVID-19 and healthcare.

Trump and his advisers see the fight over a Supreme Court nomination as a way to shift attention away from the pandemic and the way Trump has handled it, which have evoked disapproval from a majority of voters. 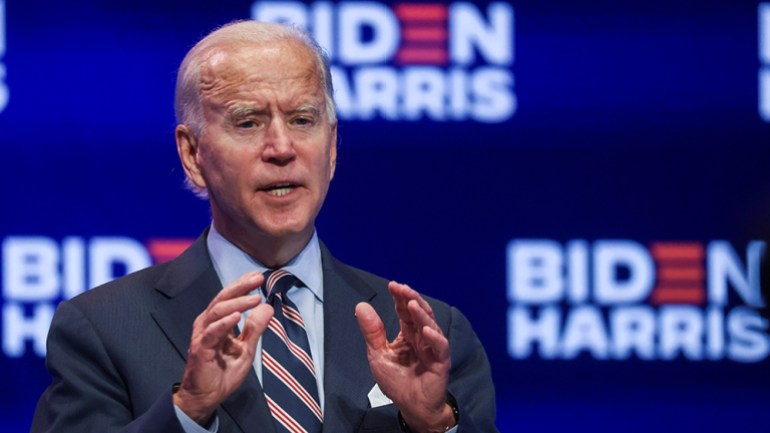 Democratic presidential nominee Joe Biden has slammed Trump over his handling of the COVID-19 pandemic, which has killed more than 200,000 US citizens to date [File: Jonathan Ernst/Reuters]But while we do not know the effect Trump’s pandemic performance will have on how Americans vote in November, we do know that healthcare – and Trump and the Republicans’ insistence on repealing the ACA – was a significant factor that helped Democrats take control of the US House of Representatives in 2018.

Trump’s rush to appoint a Supreme Court justice hands Democrats an issue they successfully ran on just two years ago.

The ACA will be before the Supreme Court in November and Democrats can now argue that the healthcare law, which more Americans favour than do not, is truly in danger of being shut down.

Speaking of handing the Democrats an issue, even some Trump supporters believe the president’s unproven rhetoric calling mail-in ballots a “Democratic scam” that will contribute to a “rigged” election, might be doing him more harm than good.

Trump went further this week, telegraphing that one of the reasons why he is trying to fill the vacant Supreme Court seat prior to November 3 is because he wants a full court available to rule on any post-election litigation he may be involved in.

The Wall Street Journal editorial page, not normally critical of the president, said those comments are a tactical mistake, handing “Democrats a ready-made line of attack in Supreme Court confirmation hearings”.

“Senate Democrats will charge that Mr. Trump’s nominee is being installed to help him steal the election,” the newspaper said.

That also becomes a powerful rallying cry for Democratic voters who may have sat out in 2016 thinking Hillary Clinton had the election in the bag based on pre-election polling.

There are many Republicans who see a long-term benefit to appointing another staunch conservative to a lifetime seat on the court.

But short-term, as Trump is rallying his base, key demographic groups – Democrats that did not turn out in 2016, women voters, younger voters – could very well be motivated to go to the polls thanks to the political issues raised by this nomination.

Election day may be five weeks away, but in this extraordinary pandemic year, people are already casting their votes in several states thorough a combination of mail-in, absentee and early voting.

In an election that has therefore already begun, the Republicans are walking an electoral tightrope and taking large political risks – and we are left with one question: how does the Supreme Court fight affect voter sentiment towards Trump and Republicans, if at all, as the battle intensifies?

By Karen Brettell NEW YORK (Reuters) – The dollar gained on Monday as investors waited on U.S. fiscal stimulus to blunt the impact of business shutdowns designed to halt the spread of the coronavirus, even after the Federal Reserve took unprecedented measures to support lending. In a series of actions the Fed agreed to historical […]

FRANKFURT (Reuters) – Germany’s auto industry association VDA said on Tuesday its members would help to build and supply medical equipment to fight the coronavirus, but warned they would need to meet the standards and processes of the medical industry. BMW <BMWG.DE>, Volkswagen <VOWG_p.DE> and others have pledged to help manufacture and supply hospital ventilators […]

Jet market oracle Tinseth bows out with Boeing at crossroads

By Tim Hepher and Jamie Freed SINGAPORE (Reuters) – Years ago, when Randy Tinseth was still running Boeing’s sales account for United Airlines, the plane company’s designers pulled him aside. “They called me in and said we want to show United this interesting product and we can’t tell you about it until we get there,” […]

Sainsbury’s Roberts is leading internal contender to be next CEO: sources