Perhaps never before in American history has the act of voting been so closely scrutinized before a presidential election. A pandemic, partisan attacks on voting rights and a White House incumbent falsely warning of fraud have put extraordinary pressure on the democratic process.

PATRICK HEALY Early voting is underway in Michigan, Virginia and other states, and tens of millions of absentee ballots are going out. What stands out to you about voting so far?

NICK CORASANITI We just saw how high the interest is in this election: long lines in major counties in Virginia on the first two days of early voting. But we also saw the potential for it to turn ugly: There was a group of Trump supporters who walked over to a polling location in Fairfax, Va., and began chanting at voters as they waited in line. Some felt intimidated.

STEPHANIE SAUL Nick got an interesting email from a voter who said she broke into tears.

REID J. EPSTEIN While there were long lines in some places, it was fast and easy to vote at the vast majority of locations. Virginia voters in Arlington and Alexandria reported getting in and out in less than 10 minutes.

EPSTEIN Looking at turnout, take Delaware’s primary this month. Turnout for its Senate primary (Democratic and Republican contests combined) was up 44 percent over 2018, even though neither year was particularly competitive.

HEALY Do we have any evidence about which side is more energized, Trump voters or Biden voters?

EPSTEIN By all accounts far more Democrats have requested absentee ballots than have Republicans.

CORASANITI An analysis by Catawba College in North Carolina conducted in late August found that registered Democrats had requested 53 percent of the absentee ballots in that state, while only 15 percent of requests had come from Republican voters.

SAUL It’s hard to know whether the Republicans will catch up or not, or if they just want to vote at polls. 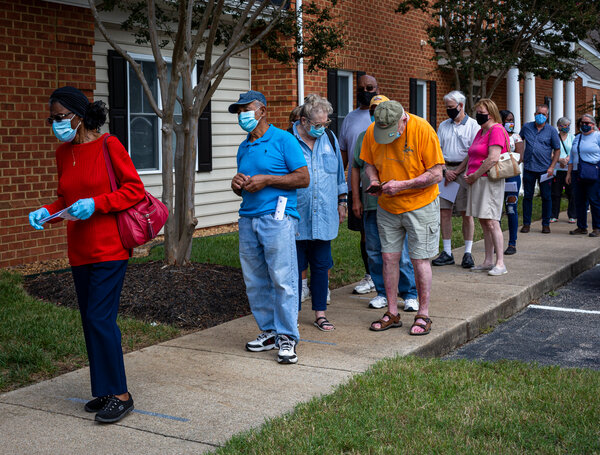 HEALY So what would an orderly election look like this fall?

HERNDON There will need to be huge amounts of voter education about what’s new: mail-in and absentee rules, changed polling locations, poll worker shortages. Many of those changes are because of the virus. But I also think it’s about trust — has it been communicated to voters that the system is working in the interest of all Americans? Do they believe it? That goes a long way to maintaining order in the run-up to Election Day and its aftermath.

CORASANITI Trust is paramount. One major effort a lot of cities have been undertaking is to still make Election Day as normal as possible. That means no consolidation of polling locations, backed by a huge poll worker recruitment effort.

SAUL As for election night, there’s a lot of agreement that we won’t know the winner. Several states won’t be finished counting that night because of the large number of mail-in ballots expected.

HEALY Which big states are most likely to have full results on election night?

EPSTEIN Florida will be first. Florida and Arizona have a large percentage of their vote coming in by mail, and they are allowed to count the mailed-in ballots ahead of Election Day and release the results shortly after the polls close.

SAUL Ohio also has the ability to count fairly quickly.

HEALY What about Pennsylvania, Wisconsin and Michigan — the three states that decided the 2016 election?

CORASANITI Those three will probably be the last major states we’ll get full results from.

SAUL About half the counties in Pennsylvania were still counting votes a week after its primary.

EPSTEIN Wisconsin could be a while. The elections there are run by municipalities, not counties. In most of these places, the entire election staff is one village or town clerk, who suddenly has the job of processing a swamp of absentee ballots instead of just reading the numbers off voting machines. This will take much longer than normal.

CORASANITI Currently, four critical swing states — Wisconsin, Pennsylvania, Michigan and New Hampshire — don’t allow their election officials to begin processing millions of absentee votes until Election Day. There is both legislation and litigation in those four states seeking to change those laws. Pennsylvania’s Supreme Court just said officials could accept ballots postmarked by Election Day as late as the following Friday. And it’s possible Michigan and Wisconsin end up accepting ballots that are postmarked by Election Day a few days later as well, depending on how federal courts rule in pending litigation.

HEALY Nick, what are the chances that any of those four states will change their rules and count the votes before Election Day?

CORASANITI Both Republicans and Democrats in the Pennsylvania legislature are confident that they will be able to change the law regarding vote processing. The question is: Will it be closer to the nearly three weeks before Election Day that the Democrats want, or three days before, which is the Republican proposal? Michigan and Wisconsin are more up in the air, because the only way they will be able to change the rules is through pending litigation.

HEALY Many election officials are working hard to make for an orderly and safe vote, but there are still challenges. What do experts see as worst-case scenarios for voting and the election?

EPSTEIN For voters, the worst case would look something like what happened in Georgia for its primary in June. There you had overburdened elections officials trying to conduct a mail-in and an in-person election at the same time, without sufficient resources to do either. The result was an absentee ballot system that left tens of thousands of voters without the ballots they’d requested, and hourslong lines at Election Day polling places that were short poll workers across the state.

CORASANITI There is also a Democratic concern that they call the “red mirage.” Which is that President Trump is winning the returns as of Election Day, declares victory pre-emptively and prematurely, but when all the absentee ballots are counted, Joe Biden wins, which would probably lead to some pretty contentious political bickering.

Ireland 'privately worried' over EU fishing stance says expert We use your sign-up to provide content in ways you’ve consented to and to improve our understanding of you. This may include adverts from us and 3rd parties based on our understanding. You can unsubscribe at any time. More info The latest escalation in the row […]