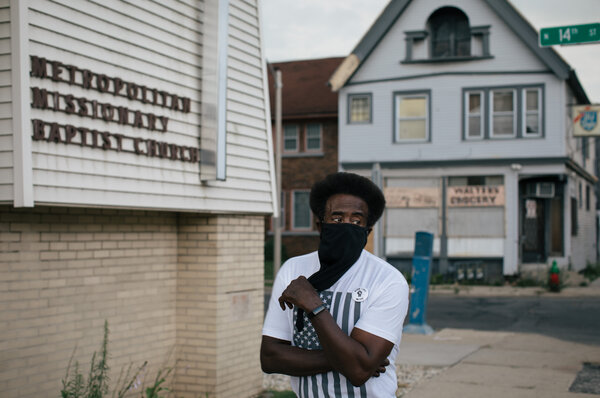 Photographs and Text by Alyssa Schukar

MILWAUKEE — For 15 years, Johnny Miller worked the polls at a church on Milwaukee’s North Side. He was born in Mississippi, where, he said, his family was terrorized by the Ku Klux Klan for attempting to cast ballots. This background makes him feel “a deep historical tie with trying to get people to vote.”

In 2020, he is aware of a different threat when it comes to working the polls: the coronavirus pandemic. Mr. Miller, who is 70 and has a heart condition, said the risk was too high. Ten of his friends have died from Covid-19, the disease caused by the virus.

The pandemic is making voting more complicated, with higher stakes. But, activists note, it’s just one more thing to worry about on top of strict identification and mail-in ballot laws that can disproportionately make it difficult for eligible low-income voters, and Black and Latino voters, to cast their ballots.

In 2016, President Trump won Wisconsin by just 23,000 votes — the first time a Republican presidential candidate carried the state since 1984. Turnout was down that year by almost 19 percent for Black voters and 6 percent for Latino voters, which is part of the reason turnout groups are focused on those populations this year.

Polls show a close race between Joseph R. Biden Jr., the Democratic nominee, and Mr. Trump, but disapproval by a majority of Mr. Trump’s handling of the virus.

Across the city’s predominantly Black North Side and Latino South Side, organizers and activists are registering new voters and helping others navigate the system.

“Black people have been intimidated not to vote since we were three-fifths of a man,” Mr. Miller said, referring to a clause in the original U.S. Constitution. He described a lack of voter education which, in his view, has led to disenfranchisement in the North as a “a different form of Jim Crow.”

On a hot, late summer afternoon, Keviea Guiden set up a table alongside an empty lot on the North Side.

At an intersection where hundreds of pedestrians, bus passengers and drivers could easily spot her, she gave away 500 masks in 90 minutes and encouraged people to vote.

Ms. Guiden, a community organizer for the nonprofit Black Leaders Organizing for Communities, said she meets a lot of people who say they live in places without enough investment in the communities and whose children attend underfunded schools.

“The only way we can bring about change is if we do vote,” she said.

The first time Danita Jackson, who is blind, asked her son Jafari Jackson to help complete her ballot, he was only 9 years old. “I wanted to show him by example the importance of voting,” Ms. Jackson said.

Ms. Jackson, who works for the nonprofit Disability Rights Wisconsin, says many of the people she works on behalf of are eligible but not registered to vote.

Wisconsin does not provide an alternative to printed mail-in ballots. And while she could request a Braille form, she said she could not guarantee that her vote would be counted correctly unless she goes in person and assumes the risk. During the state’s local primary in August, she had to share a pair of unsanitized headphones with another voter.

Mr. Jackson, who is now 24 and lives in Phoenix, knows his mother will do whatever it takes to vote, but said he worried about other voters with disabilities. “It’s a basic American idea that we should all be able to vote,” he said. “Everybody deserves to have their voice heard.”

Most of Milwaukee’s 100,000 Latino residents live in a working-class community on the South Side. The ZIP code where Roman Moreno has lived his entire life, 53215, accounts for 20 percent of the city’s coronavirus cases.

“In our community, we’re barely making it as it is, especially with the pandemic,” Mr. Moreno said.

He said that many of his neighbors were squeezed by the pandemic in ways that could affect their access to voting: They have faced eviction, which means a change of residence and a new ID card, something not everyone in the community can afford. In July, the state Supreme Court increased the number of days a stable address must be kept, to 28 days from 10. If your address has changed, you must re-register to vote.

Burst of success for progressive challengers in U.S. congressional races may fizzle in Massachusetts

WASHINGTON (Reuters) – A solid year for progressive Democrats who have defeated at least three incumbents in the U.S. Congress in primaries could fizzle out this week in Massachusetts where three party stalwarts were set to fend off challengers. The progressive model for success has seen an array of mostly young candidates, sometimes minorities, toppling […]

Cash Is Flowing Over Confirmation Battle for Supreme Court Vacancy

WASHINGTON — Just hours after Justice Ruth Bader Ginsburg’s death was announced on Friday, the leaders of three of the left’s most potent advocacy groups, Demand Justice, Naral Pro-Choice America and Indivisible, were on a call with 1,000 progressive activists and strategists to begin to unfurl a plan they hoped they would not have to […]

Explainer: Why Election Day could be just the start of a long battle over the U.S. presidency

(Reuters) – President Donald Trump’s suggestion on Thursday the Nov. 3 presidential election be delayed due to voter fraud was immediately rejected by lawmakers and dismissed by legal experts, but it raises the specter of a disputed election that could take weeks or even months to resolve. Here are some of the messy scenarios at […]