We’re covering New Zealand’s lifting of coronavirus restrictions, the battle over a Supreme Court seat in the U.S. and a creative attempt to stop littering in Thailand. 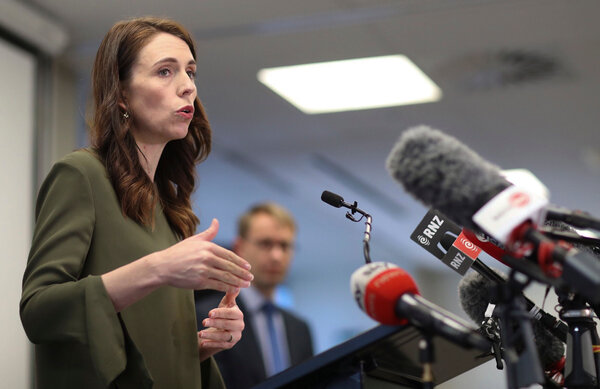 Prime Minister Jacinda Ardern announced that virus restrictions on travel and gatherings would be lifted across most of New Zealand this week. In most of the country, New Zealanders were freed of rules put in place to curb the spread of the virus on Monday night.

In Auckland, restrictions will be eased but not entirely lifted at midnight Wednesday. The city was the center of a mysterious outbreak in August that prompted Ms. Ardern to reimpose a lockdown. Those guidelines will be reviewed in two weeks, she said.

Details: Starting on Thursday, Auckland residents will be able to gather in groups of up to 100 but will be required to stay home if they are sick and log their contacts and movements. Masks remain compulsory on public transportation and are encouraged elsewhere in public.

Close to one million people have died of the virus around the world, a staggering toll. At least 73 countries are seeing surges in newly detected cases.

New lockdown measures took effect in Madrid, where hospitalizations have tripled in the past month. Spain is seeing more than 10,000 cases on average per day.

The state of Victoria in Australia, which has been under strict lockdown for several weeks, recorded 11 cases overnight, its lowest daily rise in infections in three months, the authorities said on Monday.

The Taj Mahal, a huge tourist draw in India, reopened on Monday after more than six months.

President Trump said on Monday that he would not approve a deal for TikTok if its Chinese owner did not fully sell its interest. The dispute over who will control the app’s U.S. operations threatens to scuttle a deal that was expected to help TikTok avoid being banned in the U.S.

Asked about reports that TikTok’s Chinese owner, ByteDance, would still own 80 percent of the service after the deal, Mr. Trump said that the company would “have nothing to do with it, and if they do we just won’t make the deal.”

He said Oracle and Walmart, which under the deal would take a 20 percent stake in the new company, TikTok Global, would control the service.

Confusion: TikTok said on Sunday that ByteDance would hold 80 percent of the new company until a planned public offering on the U.S. stock market in about a year. But on Monday, Oracle disputed that, saying that upon creation of TikTok Global , “Americans will be the majority and ByteDance will have no ownership in TikTok Global.”

A political fight over the appointment of a new Supreme Court judge to fill the vacancy left by the death of Justice Ruth Bader Ginsburg loomed over the U.S. Senate, weeks away from the presidential election.

Justice Ginsburg will lie in repose at the Supreme Court this week, and President Trump promised that he would wait until after her funeral to announce a nominee, possibly on Friday or Saturday. That would allow just 39 days for a confirmation vote, a process that takes, on average, 70 days.

Attention turned to a small group of Republican senators who could derail Mr. Trump’s bid. Democrats would need to sway two additional Republicans to block the vote. A new justice appointed by Mr. Trump could solidify the highest court as conservative, throwing into doubt legislation on issues like abortion, immigration and health care.

Go deeper: Judge Amy Coney Barrett is regarded as the leading contender to be Mr. Trump’s pick. She’s viewed as a home run by conservative Christians and anti-abortion activists. Read our profile.

If you have some time, this is worth it

The coronavirus crisis in the U.S. has claimed nearly 200,000 lives, the young and the old, those living in dense cities and tiny towns, people who spent their days as nursing home attendants, teachers, farm laborers and retirees. Those they left behind are trapped in a state of torment, in a country still firmly gripped in a pandemic. Above, a woman saying goodbye to her mother in a hospital in Texas this month.

In dozens of conversations with our reporters, they described the frustration, isolation and fear. The daughter of Samuel Fuoco, 71, was left with unanswered questions: “What if we were there?” and “What if we hadn’t had him intubated?”

The Emmys: HBO’s “Succession” won best drama. But “Schitt’s Creek,” which swept the comedy awards, and “Watchmen,” with its socially resonant themes, stole the show.

Thailand parks: After campers left trash in a national park, officials tracked them down, mailed the garbage back and reported them to the authorities. The move was intended to call attention to a garbage problem that endangered animals that could eat the litter.

Stolen art: The Congolese activist Mwazulu Diyabanza had protested colonial-era cultural theft by trying to take artifacts from museums in France and the Netherlands. He will appear in a Paris court this month in a case that is also likely to put France on the stand.

Snapshot: Above, the funeral early this month of Nathaniel Julies, a young man who was gunned down by police officers near his home in Johannesburg, South Africa. While police shootings are far from rare in the country, this one prompted outrage and protests in part because of the victim: Nathaniel was seriously disabled by Down syndrome, and barely able to form complete sentences.

What we’re reading: This Atlantic article on Moira Rose from the television series “Schitt’s Creek,” written last year. Carole Landry from the Briefings team writes: “This piece dissects the fashion and vocabulary that went into building the hilarious character played by Catherine O’Hara.”

Cook: One-bowl carrot loaf cake. Comforting and cozy, but still light and bright, a carrot cake with a tangy lemon glaze is just the thing for an afternoon snack.

Read: Ben Macintyre’s “Agent Sonya” recounts the story of a woman who passed along atomic secrets when she wasn’t raising her family in the Cotswolds.

Watch: Check out this selection of movies from the New York Festival, which is mostly virtual this year.

If you want to grab a book or grab a snack, At Home has lots of ideas on what to read, cook, watch and do while staying safe at home.

QAnon is a set of false theories that powerful institutions are controlled by pedophile cannibals who run the world and are plotting against President Trump. Its adherents tailored their ideas for Facebook, which has failed to restrict QAnon despite its pledges to do so. Sheera Frenkel, who covers cybersecurity, talked to our On Tech newsletter about the spread of this baseless conspiracy.

Why haven’t Facebook’s recent actions against the QAnon conspiracy worked?

Sheera: It’s tricky. People don’t want to feel like they’re being harassed, monitored or censored. And false conspiracies attach themselves to genuine activism like protecting children.

Imagine a mom is posting in a parenting Facebook group for help finding a tutor, and someone responds with an article about teachers with criminal records getting hired in schools. Two days later she might be on a QAnon group reading bogus claims about child exploitation. She didn’t seek out QAnon content. How does Facebook take action on something like that?

The one idea we hear again and again is for Facebook to stop its automated recommendation systems from suggesting groups supporting QAnon and other conspiracies.

Other than that, every expert has a different opinion.

One I spoke with said Facebook needed to decide whether it would take a hard line against all conspiracies. Another said it would be more productive to slowly cut back the circulation of QAnon-related information on Facebook and give people some clear information on why it’s false and dangerous.

Have any internet companies managed to slow the spread of false QAnon-related ideas?

Reddit used to be ground zero for QAnon until it banned a whole section of the site dedicated to the conspiracy in 2018.

Could things have been different for conspiracies on Facebook, too?

I wonder how different our world would look if Facebook, YouTube and Twitter joined Reddit in taking coordinated, effective action against QAnon. That’s what the companies did in 2015 when the Islamic State was using social media to recruit new followers. You could see almost in real time that ISIS lost much of its ability to recruit online.

In my mind, that was the clearest example of the internet companies taking action to remove a dangerous group that was pervasive.

P.S.
• We’re listening to “The Daily.” Our latest episode is about Justice Ruth Bader Ginsburg’s life and legacy.
• Here’s our Mini Crossword, and a clue: Part of a lobster or tiger (four letters). You can find all our puzzles here.
• Our “On the Runway series” will on Wednesday focus on Fashion Week in Milan. You can follow it on the Times Instagram fashion account @nytimesfashion.

Your Money: Freelancers have ‘perfect storm’ of anxiety because of COVID-19

Cop jailed after having sex with ex-boyfriend’s son, 16, as mum slept