California is one of America’s marvels. By moving vast quantities of water and suppressing wildfires for decades, the state has transformed its arid and mountainous landscape into the richest, most populous and bounteous place in the nation.

But now, those same feats have given California a new and unwelcome category of superlatives.

This year is the state’s worst wildfire season on record. That follows its hottest August on record; a punishing drought that lasted from 2011 to last year; and one of its worst flood emergencies on record three years ago, when heavy rains caused the state’s highest dam to nearly fail, forcing more than 180,000 people to flee.

The same manufactured landscapes that have enabled California’s tremendous growth, building the state into a $3 trillion economy that is home to one in 10 Americans, have also left it more exposed to climate shocks, experts say.

And those shocks will only get worse.

“There’s sort of this sense that we can bend the world to our will,” said Kristina Dahl, a senior climate scientist in San Francisco for the Union of Concerned Scientists. “Climate change is exposing the vulnerabilities in the systems that we’ve engineered.”

Those systems include some of the greatest accomplishments in American public infrastructure: Transporting huge amounts of water from the mountains to the coast and from north to south. Creating almost 1,500 reservoirs to store that water until it’s needed. Subduing the fires that are part of forest ecosystems, making more land livable for millions but stocking those forests with fuel in the process. Building dense cities along a shoreline susceptible to erosion and flooding.

Those accomplishments reflect the optimism that defines California, according to R. Jisung Park, an assistant professor of public policy at the University of California, Los Angeles, who focuses on climate adaptation. But like so much that underpins modern American life, they weren’t designed to accommodate the increasingly harsh extremes of climate change.

“The shocks are outside the range, in many cases, of historical experience,” Dr. Park said. And in a heavily manufactured system, he added, the consequences of those shocks can become more dire. 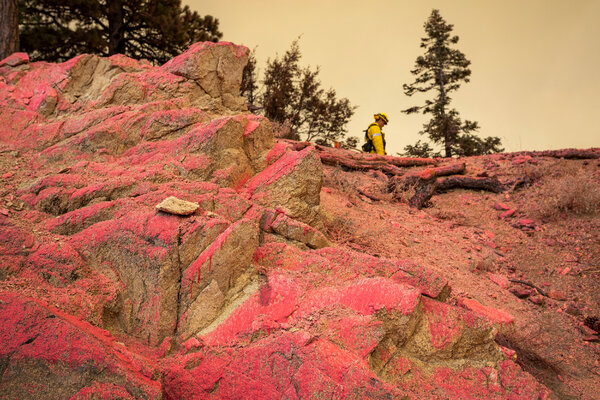 Dr. Park, like other experts interviewed, noted that California’s engineered landscapes are not the only factor behind its high-impact disasters. The state’s size and geographic diversity expose it to an unusually wide range of extreme climate events. And its large population means that when disasters do strike, they are very likely to affect large numbers of people.

Still, the manufactured systems that support the state’s population and economy have left the state especially vulnerable. The wildfires are only the latest example of how climate change can cause engineered landscapes to go awry. Those blazes are partly the result of hotter temperatures and drier conditions, scientists say, which have made it easier for vegetation to ignite, causing fires to become bigger, more intense and more frightening.

“Sometimes you feel really small and helpless,” said Mandy Beatty, who manages and maintains trails through the forests of the Sierra Nevada for the Sierra Buttes Trail Stewardship, a nonprofit group. On a chalkboard in her house in Plumas County, on the edge of the forests, she counts how long she and her husband have endured the smoke. Friday was Day 33. The fire, still raging, is on the other side of the mountain.

The intensity of the fires also reflects decades of policy decisions that altered those forests, according to Robert Bonnie, who oversaw the United States Forest Service under President Barack Obama. And the cost of those decisions is now coming due.

In an effort to protect homes and encourage new building, governments for decades focused on suppressing fires that occurred naturally, allowing the buildup of vegetation that would provide fuel for future blazes. Even after the drawbacks of that approach became clear, officials remained reluctant to reduce that vegetation through prescribed burns, wary of upsetting residents with smoke or starting a fire that might burn out of control.

That approach made California’s forests more comfortable for the estimated 11 million people who now live in and around them. But it has also made them more susceptible to catastrophic fires. “We’ve sort of built up this fire debt,” Mr. Bonnie said. “People are going to have to tolerate smoke and risk.”

President Trump, apparently referring to the increase in vegetation, has responded to California’s fires by telling the state to “clean your floors.” But most of the forests in California are federally owned, Mr. Bonnie noted, and Mr. Trump has sought to cut spending on forest management. And Mr. Bonnie said the fuels that matter most aren’t on the forest floor, but rather the trees themselves — and the best solution is letting more of them burn safely.

“The vast majority of our people are concentrated in the areas where the water is not,” Dr. Mount said. California’s response was to build what he called “by far the West’s most complicated storage and conveyance system.”

That system moves water that falls as snow on the Sierra Nevada mountains to the south and west, providing drinking water for the state’s coastal cities and irrigation for farms in the arid Central Valley, turning California into an agricultural powerhouse that produces one-quarter of the nation’s food.

Precipitation patterns are becoming more extreme: The dry years are becoming drier, forcing cities and farmers to deplete their underground aquifers — something that Frances C. Moore, an assistant professor of environmental economics and climate science at the University of California, Davis, called a “race to the bottom.”

“That is not something that’s a sustainable response,” Dr. Moore said.

At the same time, wet periods are becoming wetter, which brings challenges of its own. Heavy rains threaten to overwhelm the vast network of aqueducts, reservoirs and dams that hold that water.

That increases the likelihood of the sort of catastrophe that almost struck three years ago, Dr. Mount said. A combination of intense rain and structural damage nearly caused the failure of the Oroville Dam, the nation’s highest, which would have unleashed disastrous flooding north of Sacramento.

Oroville is unlikely to be a one-off event. California has more dams rated “high hazard” than almost any other state, according to figures from the Association of State Dam Safety Officials. California’s state auditor reported in January that while the state has upgraded the Oroville Dam, others around California continue to pose a risk.

“You’re got 40 million people who are dependent on this system, which was designed in the last century,” Dr. Mount said. “It’s not a surprise that you’re seeing many crises.”

Climate change is also threatening California’s coastline, the longest in the nation after Alaska and Florida. That coastline is less physically exposed to rising seas than parts of the Atlantic, where water levels are rising more quickly, according to Dr. Dahl at the Union of Concerned Scientists.

But California’s more densely populated coast, combined with its use of landfill to expand waterfront communities and its famous cliff-side homes, mean the state has more people at jeopardy from rising seas.

“We’ve built right to the edge of the water,” Dr. Dahl said. “We’ve altered the coastline to suit our needs, and we’re increasingly seeing the limitations of that.”

To some, California’s vulnerability to climate change is just one more challenge for the state to engineer its way out of, even as it keeps growing.

Annie Notthoff, a California water expert at the Natural Resources Defense Council, said the state has already made progress on water efficiency, encouraging cities and counties to cut their water use and recycle wastewater.

“I think that if we’re smart, and we use new technology, there’s room for everyone,” Ms. Notthoff said. “I believe in California. I’m fifth-generation.”

That optimism is shared, perhaps unsurprisingly, by state officials. Kate Gordon, a senior climate adviser to Gov. Gavin Newsom, described a series of steps the state is taking to cope with climate risks, including shifting more development into cities and away from the edge of the wilderness, and designing coastal roads and bridges with rising seas in mind.

“We’ve allowed for a development pattern that’s completely sprawled, which I don’t think we can keep doing,” Ms. Gordon said. “We have a lot of ability to be more compact, to be more efficient.”

Others were more wary. Solomon Hsiang, a professor of public policy at the University of California, Berkeley and co-director of the university’s Climate Impact Lab, described being stuck inside as smoke filled the sky, and walking around his home with a hand-held air-quality indicator to find out which rooms had the worst air. “Everyone who could leave town has left town,” he said.

Climate change in California is more than just an escalating series of short- and long-term disasters, Dr. Hsiang said. It’s also eroding the idea that the state can mold itself into whatever it wants to be, insulated from the physical threats around it.

“California was the land of opportunities,” Dr. Hsiang added. “There’s this story that we can have it all, and that’s just not true.”

The US Air Force says it's developing microdrones that can flap their wings and change wingbeat mid-flight. The organisation's elite research lab is working with designers from Airion Health LLC to prototype a remote-controlled mini air vehicle that can imitate either insect or bird flight, for surveillance purposes. The microdrone will have the ability to […]

We use your sign-up to provide content in ways you’ve consented to and to improve our understanding of you. This may include adverts from us and 3rd parties based on our understanding. You can unsubscribe at any time. More info Mr Khan lost a no-confidence vote and MPs in Islamabad replaced him as prime minister […]

Coronavirus downturn will be worse than 2008, WTO says