The UN Secretary General has told Sky News that goals set five years ago to help tackle global problems such as poverty, inequality and climate change have been “dramatically derailed” by the COVID-19 crisis – as a new film highlighting the biggest issues facing the world today is released.

Antonio Guterres said the coronavirus pandemic has shown how “vulnerable we are” and that in some aspects, “we are moving 25 years back”.

It comes ahead of the release of the film Nations United – Urgent Solutions For Urgent Times, featuring activist Malala Yousafzai and stars including Beyonce, Thandie Newton, Forest Whitaker, Don Cheadle and Burna Boy. 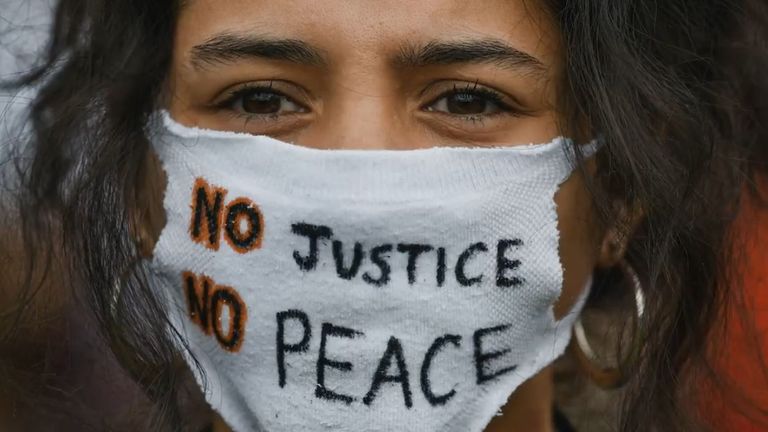 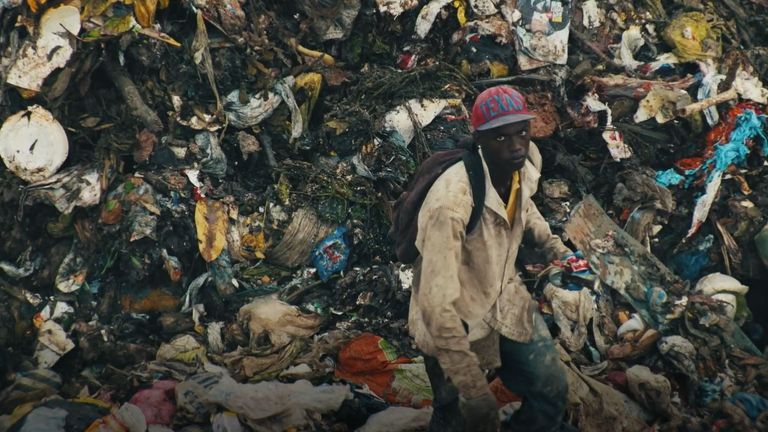 Setting out the steps the organisation says need to be taken to tackle the world’s biggest issues, the short film, which has been directed by filmmaker Richard Curtis, marks the United Nations‘ 75th anniversary, as well as the fifth anniversary of the 17 sustainable development goals being set up.

Speaking ahead of the film’s release, Mr Guterres said those goals had been “dramatically derailed” by COVID-19.

“The pandemic has shown how vulnerable we are,” he told Sky News. “Vulnerable in relation to a microscopic virus that has put us on our knees, vulnerable already in relation to climate change and many other challenges that we are facing.

“And the truth is that all the progress that was being made in the eradication of poverty, eradication of hunger and in many other aspects around the world, all that progress is being put into question.

“In some aspects we are moving 25 years back, and now we need to enhance our efforts and we need to take profit of the huge mobilisation of resources that is being done for the recovery to make sure that those resources are applied in line with those sustainable development goals.” 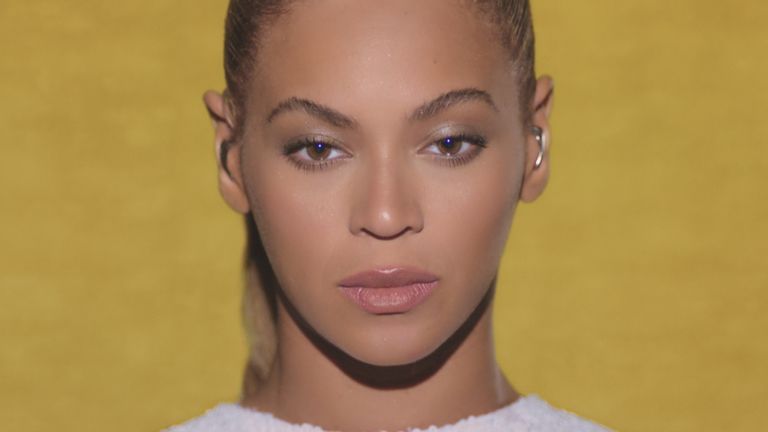 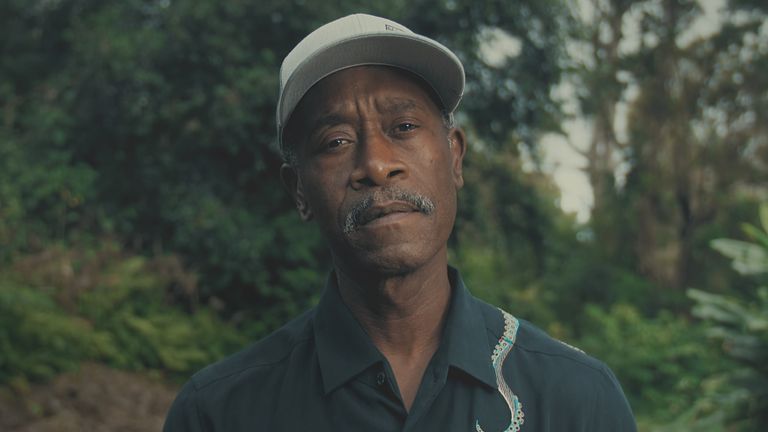 “We cannot go back to where we were,” he said.

The UN Secretary General has called for $35bn (£27bn) more in funding – including $15bn in the next three months – for the World Health Organisation’s (WHO) programme to back vaccines, treatments and diagnostics against COVID-19, in addition to $3bn so far.

Asked if he is concerned about any potential vaccine being distributed fairly around the world, Mr Guterres said: “The argument is obvious. A vaccine can be extremely important to allow for the relaunch of the global economy but if it only happens in the North, the South, unfortunately, will make COVID come back…

“There are second waves being expected. So we need to make sure that we have a vaccine everywhere if we want to protect our own populations in the developed world.”

The sustainable development goals were launched in September 2015, with 193 world leaders committing to 17 objectives and targets to end extreme poverty and hunger, fight inequality and injustice, and tackle climate change, by 2030. 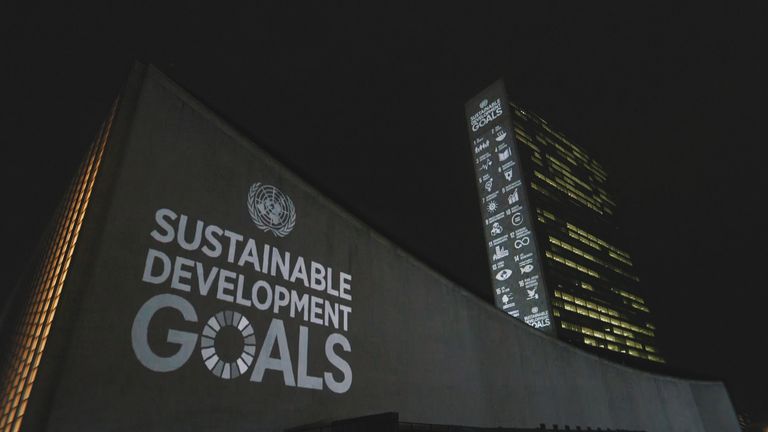 Nations United aims to show viewers the “multiple tipping points” the planet faces, and the interventions that could help over the next decade.

UN sustainable goals advocate Curtis, best known for directing British hits including Four Weddings And A Funeral and Love Actually, said in a statement: “Nobody could have anticipated the crisis and uncertainty that we’re living in, but also the immense appetite and opportunity for change that COVID-19 has provided.

“Through Nations United, we want to tell the story of how we will use the moment to radically transform our world for the better and set out the solutions that will bring about real global change.”

:: Subscribe to the All Out Politics podcast on Apple Podcasts, Google Podcasts, Spotify, Spreaker

Newton, best known for her roles in films including Crash and Mission Impossible II, as well as series such as Westworld and Line Of Duty, is also a women’s rights activist.

“In the midst of COVID-19, it’s a historic opportunity to look at the facts of the world as it is – and to then focus on the solutions to some of our greatest problems,” she said in a statement.

“In the 75 years since the United Nations was founded, the human race has never had to face a set of challenges like we do right now.

“But together, we can overcome them.”

Nations United – Urgent Solutions For Urgent Times premieres on YouTube at 2pm UK time on Saturday. You can also watch on Sky Documentaries at 6.35pm on Sunday, and on demand following the broadcast

(Reuters) – A more comprehensive trade deal between the United States and China is unlikely, a global trade expert said on Friday, adding that the recently agreed Phase 1 deal lacks teeth and is too ambitious in its scope. Chris Rogers, research analyst at S&P Global Market Intelligence’s supply chain analysis group Panjiva, said the […]

By Sharon Bernstein FORT DODGE, Iowa (Reuters) – Democratic presidential contender Amy Klobuchar is banking on a strong showing in Iowa’s first-in-the-nation nominating contest on Feb. 3 to jump-start her path to the party’s nomination. The moderate U.S. senator from Minnesota, who is polling in fifth place with Iowa voters, squeezed three town halls and […]

FRANKFURT (Reuters) – Daimler <DAIGn.DE> is in talks with lenders for a credit facility of at least 10 billion euros ($11.03 billion) to help the car company cope with the coronavirus outbreak, Bloomberg reported on Thursday. Bloomberg, citing unnamed people familiar with the matter, reported that an announcement on the final amount could come as […]

At least 15 officers mistook guns for Tasers. Three were convicted.