A statement by the president this week was an insight into how he views the country as composed of parts that either are for him or against him. 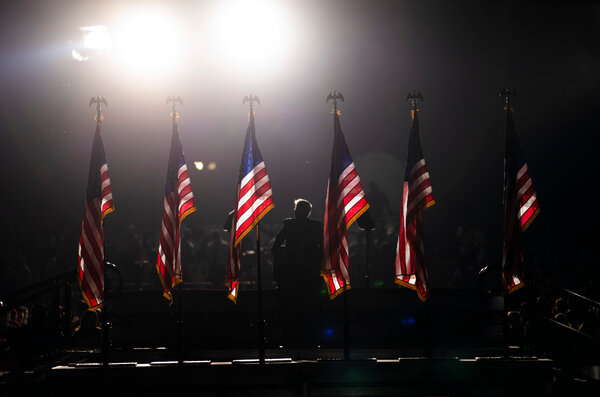 WASHINGTON — President Trump argued this week that the death toll from the coronavirus was actually not so bad. All you had to do was not count states that voted for Democrats.

“If you take the blue states out,” he said, “we’re at a level that I don’t think anybody in the world would be at. We’re really at a very low level.”

The statement was as jarring as it was revealing, indicative of a leader who has long seemed to view himself more as the president of Red America rather than the United States of America. On the pandemic, immigration, crime, street violence and other issues, Mr. Trump regularly divides the country into the parts that support him and the parts that do not, rewarding the former and reproving the latter.

While presidents running for re-election typically look at the map of the country through a partisan lens, they ostensibly take off such a filter when it comes to their duties to govern, or at least make the effort to look like they do. But that is an axiom Mr. Trump has rarely observed as he rails against “Democrat cities” and “badly run blue states.” And he has sought to punish them with tax policies and threats to withhold federal funding, while devoting far more time and attention to red states.

“President Trump views and uses politics as a popularity contest, rewarding those he considers personally loyal to him,” said David Lapan, a former senior official in Mr. Trump’s Department of Homeland Security who is now at the Bipartisan Policy Center. “This isn’t high school, and lives are at stake, often with tragic results.”

The contrast with his predecessors in moments of national crisis could hardly be more stark. After the terrorist attacks of Sept. 11, 2001, President George W. Bush invited the Democratic senators from New York, Hillary Clinton and Chuck Schumer, to the Oval Office to collaborate on how to help the victims and repair the damage.

When Hurricane Sandy slammed into New Jersey just days before the 2012 election, President Barack Obama broke off from campaigning to travel to the ravaged state where he stood side by side with Gov. Chris Christie, a Republican who was supporting his opponent, to pledge solidarity in recovery efforts.

Nicola Sturgeon suggests lockdown could last 'until May' Nicola Sturgeon announced on Monday that Scotland would be placed in a national lockdown until at least February in a bid to stop the rapid spread of the new Covid variant. The SNP leader’s introduction of such strong measures to combat the coronavirus has cast doubt on whether […]

Mini-bull, tired bear, or something in-between

Bank of Italy reform in spotlight after latest bank bailout

Who might argue the case against Trump in the Senate impeachment trial?

This is another News Portal > World News > European shares gain on oil rebound, hopes of stimulus