The government has admitted its UK Internal Market Bill could breach international law, but has insisted it is “critical” to ensuring the unfettered access for goods from Northern Ireland to the rest of the UK.

But the proposed legislation has prompted a storm of anger both at Westminster and in Brussels over the plan to give ministers the power to alter key elements of the UK’s Withdrawal Agreement, which was formally signed by Prime Minister Boris Johnson in January. 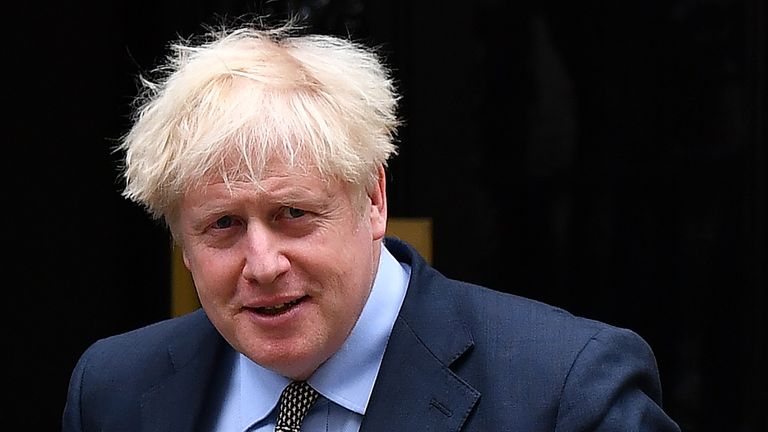 His comments mean all five living former prime ministers, including ex-Labour premiers Tony Blair and Gordon Brown as well as Sir John and Mrs May, have now spoken out against the government’s proposals.

He said: “Passing an Act of Parliment and then going on to break an international treaty obligation is the very, very last thing you should contemplate.

“It should be an absolute final resort. So I do have misgivings about what’s being proposed.”

“Of course the bigger picture here is we are in a vital negotiation with the EU to get a deal and I think we have to keep that context, that big prize in mind, and that’s why I’ve perhaps held back from saying more up to now.”

At the weekend, UK chief negotiator Lord Frost accused the EU of threatening “explicitly” in trade talks that Great Britain would not be able to move food to Northern Ireland.

However, EU chief negotiator Michel Barnier has said Brussels is “not refusing” to list the UK as a third country for food imports – although he has called for “more clarity” on the UK’s food safety and animal and plant health measures.

Government minister Kit Malthouse told Sky News that, if the EU does not list the UK as a third country for food imports, then “we could be in a position where food exports from Great Britain to Northern Ireland could be illegal”.

“No prime minister, it seems to me, can contemplate that situation,” he told the Kay Burley @ Breakfast show.

MPs will debate the UK Internal Market Bill in the House of Commons on Monday afternoon, with a number of Tory MPs expected to rebel against the legislation.

There has also been anger among Tory Brexiteers, with former attorney general Geoffrey Cox condeming the government’s plan as “unconscionable”.

But Mr Malthouse, the policing minister, said he had “yet to hear from people who oppose this bill what their solution would be to this problem”.

“Tesco could not, in theory, stock the shelves in Northern Ireland,” he added.

“That’s a situation which we never expected to be presented with.”

“In circumstances where the EU sought to prevent food exports from GB to Northern Ireland, I think that would be perfectly legitimate thing for us to do,” he said.

“To say ‘that’s just not within our sovereign rights and we therefore we have a right to supply food into that part of the country’.

“I those circumstances I think… international law would accommodate that.”

Labour peer Lord Hain, a former Northern Ireland secretary, told Sky News the government’s use of “bombast” and proposal to override the Withdrawal Agreement had “ruined our reputation across the world”.

“Britain cannot have a situation where we give our word and then we actually break it,” he said.

“It completely destroys our standing in the world.”

WASHINGTON (AP) — President Donald Trump’s move to defer Social Security payroll taxes could be taking him into treacherous political territory. His directive — aimed at boosting an economy shaken by the coronavirus pandemic — doesn’t affect retirement benefits but impacts how they’re paid for. Democrats seized on it Monday as a signal that Trump […]

We will use your email address only for sending you newsletters. Please see our Privacy Notice for details of your data protection rights. The Hate Crime and Public Order (Scotland) Bill introduced by the Scottish Justice Secretary looks to extend the law on ‘hate crime’ covering particular characteristics, including religion, sexual orientation and transgender identity. If […]

Airline industry may not survive without state aid: Lufthansa

Trump says he will suspend all immigration into U.S. over coronavirus

This is another News Portal > World News > EU tells traders working from home: take notes if you can’t record calls