The warmest September since 2016 is on its way. Starting from Monday, the heat blast will last just 48 hours, with temperatures reaching at least 30C in parts of the UK and possibly even 31C in some parts.

According to BBC meteorologist Ben Rich, the sudden warmth is due to “high pressure dominating Europe, giving us warm air from the south”.

He said: “Tomorrow is where things really start to warm up for most of us.

“There is just some patchy cloud and rain across north-east Scotland, and some of that scrapping Northern Ireland.

“But look at these temperatures for September – 28C and 29C. 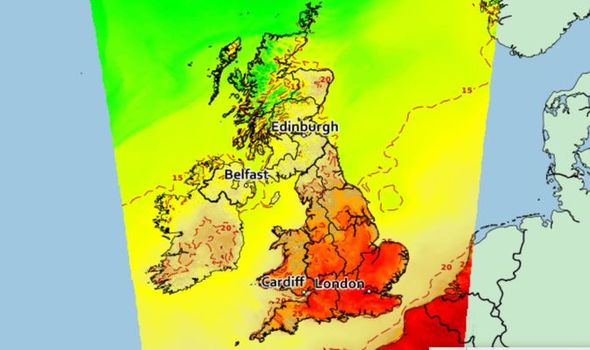 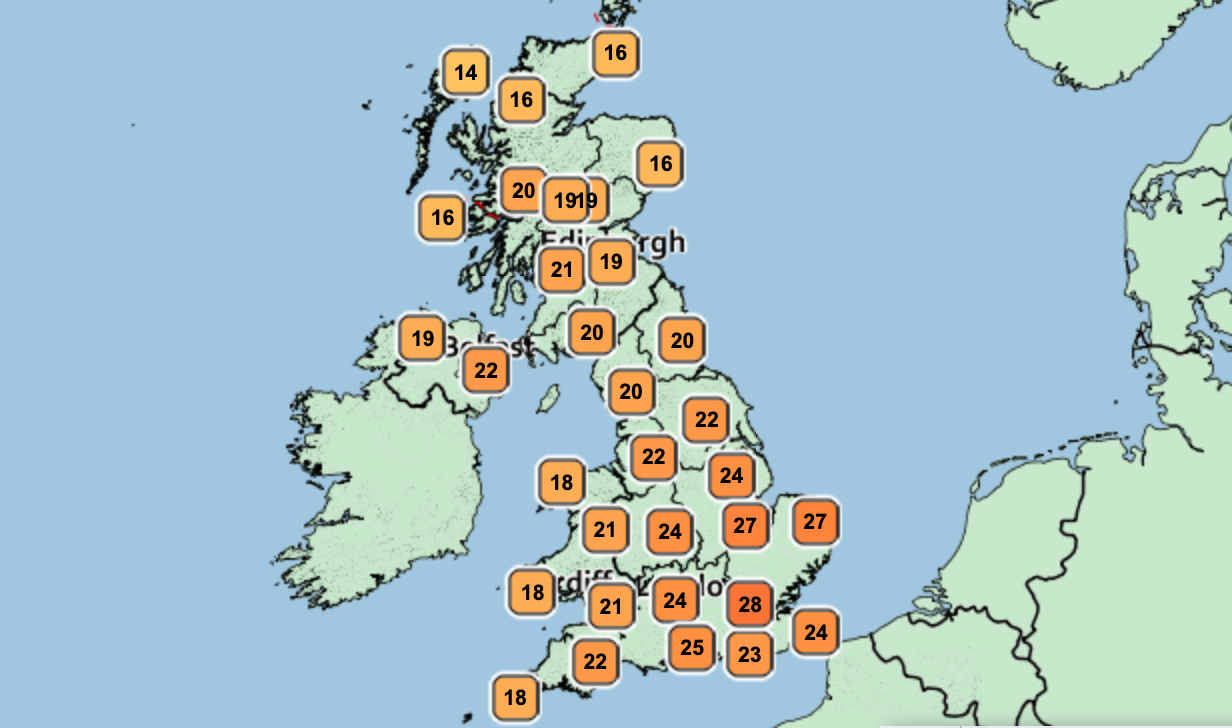 “There is a fair chance we could reach 30C in the south-east by tomorrow afternoon.

“Some more cloud on Tuesday but still temperatures will reach 28C, 29C again.

“But after that things will become cooler, although conditions will remain largely dry.”

According to the Met Office forecaster Bonnie Diamond, the “tropical continental air pushing up from a southerly direction in combination with light winds” will lead to temperatures of up to 25C on Sunday and 29C on Monday. 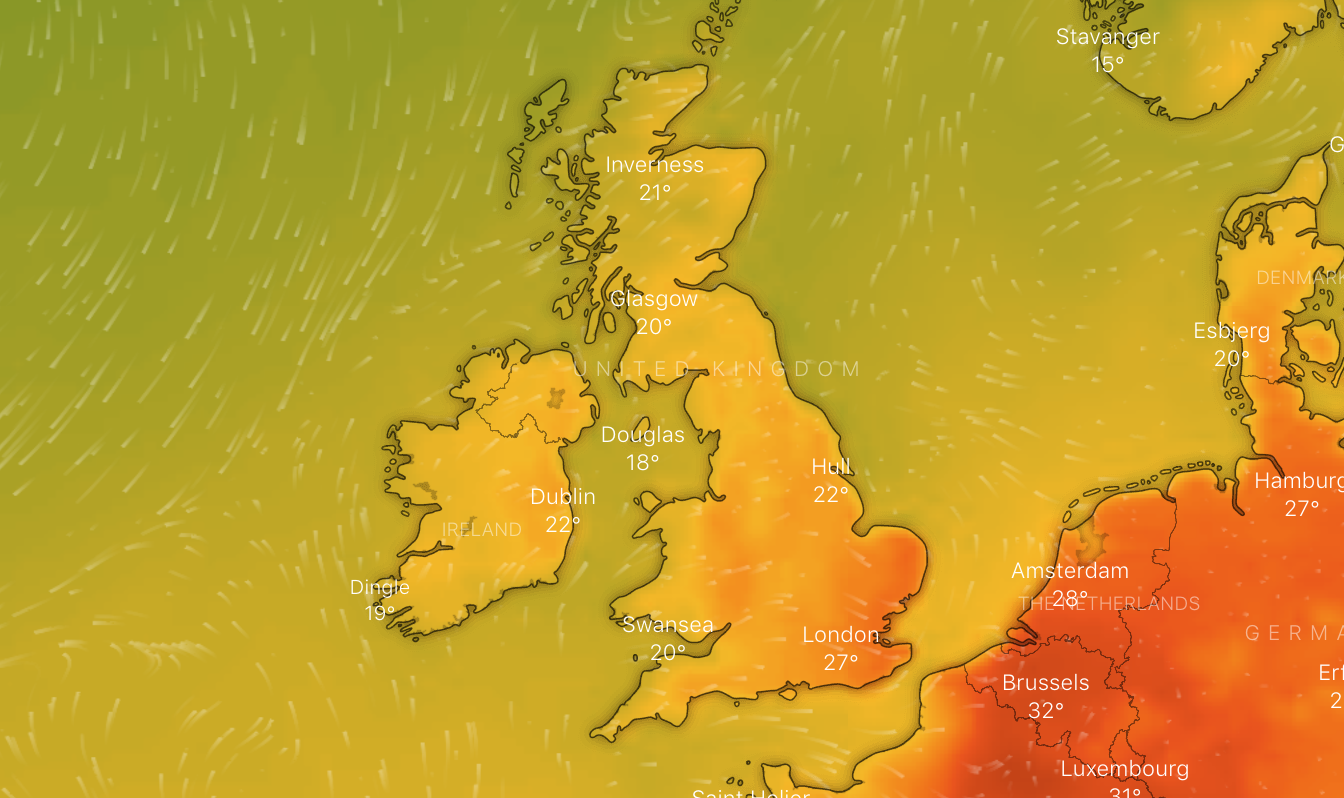 She continued: “It definitely feels like one last blast of summer, even though we are, meteorologically speaking, in autumn.”

The highest September temperature ever recorded in the UK was 35.6C on September 2, 1906, but “they don’t look like they are going to come anywhere close to that in this current hot spell”, the forecaster said.

The Met Office weather report for Monday reads: “Most parts dry with plenty of warm sunshine, becoming hot in the south.

“Cloudy across northwest Scotland with some light rain. A few showers possible across Northern Ireland later.”

On Tuesday, the Met Office predicts “bright and very warm for many, hot in the southeast. A few showers possible, mainly in the west. Mostly fine and dry thereafter, turning cooler from the northeast.”

Will the heatwave hit my area?

As usual with warm weather in the UK, much of the Saharan blast will be concentrated in the south of England, with Scotland looking set to miss out completely.

London will see the hottest temperatures over the next two days, with the Home Counties also basking in the glorious sunshine.

Further east, Devon and Cornwall are expected to be slightly cooler but will still get a fill of sunshine. 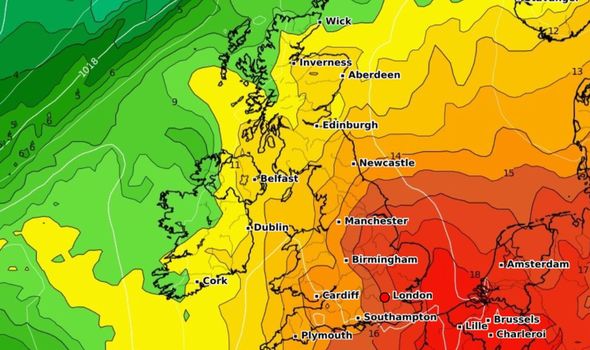 East Wales around the border will also see high temperatures, with west Wales and the coast not so lucky this time.

Further north, temperatures will be balmy but not too hot, and it currently looks like Scotland will miss out on the warm weather.

Glasgow and Edinburgh will just about grasp 20C, and further north an anomaly in Inverness is expected to reach 21c on Tuesday.

Aside from that, much of the rest of Scotland will be experiencing slightly above average temperatures for this time of year.

Northern Ireland will enjoy sunshine and temperatures in the mid-20s from Monday through to Tuesday.

UK weather has been temperamental in recent weeks and months, to say the least.

August saw a huge heatwave followed by one of the coldest bank holiday weekends ever recorded.

We use your sign-up to provide content in ways you’ve consented to and to improve our understanding of you. This may include adverts from us and 3rd parties based on our understanding. You can unsubscribe at any time. More info The Russian aircraft were spotted off the coast of Finnmark in the north of Norway […]

BRUSSELS (Reuters) – The European Commission supports all tools that would help mitigate the negative impact of the coronavirus epidemic on the EU economy, the EU executive arm said on Friday when asked about discussions to deploy the euro zone bailout fund to help. “The Commission supports the institutions and member states using all the […]

Atlantia waiting for government to reply on motorway investment proposal: CEO to paper

MILAN (Reuters) – Atlantia <ATL.MI> is waiting for a reply from the Italian government over proposals it has made to modernize the motorways it runs, the group’s chief executive said on Friday. In an interview with Corriere della Sera, Carlo Bertazzo said the priority was to share with the government a program aimed at upgrading […]

Looking in, looking out: world emerges from lockdown with mixed feelings

Aliens are too busy having sex with robots to visit Earth, AI expert claims