Genghis Khan is believed to have been responsible for up to 40 million deaths during his brutal reign with his army of Mongolians – who established history’s largest empire. The cruel conqueror and his horseback riders devastated cities in their wake from 1206 until 1227. After taking over an area they spared no man, woman or child. Enemies were either decapitated or drowned in troughs of blood. The true brutality of these dark times was unveiled in an archive testimony from a witness who observed the aftermath of one of his massacres.

Driven out of their land due to the effects of climate change, Khan was determined to overrun China in 1214 – an area thought of as the “greatest prize” due to its wealth and resources.

Dr Timothy Brook, from the University of British Columbia, said: “The Mongols were an unbelievably effective military force, if they had a target they wanted to take no one stood in their way.

During their siege upon the capital city of Zhongdu, now Beijing, they used battering rams created by Chinese engineers the army had captured and enslaved.

Before they broke through the gates, it was claimed that 60,000 women took their own lives out of fear of the brutality that they could be subjected to.

Richard Machowicz, a former US Navy Seal, said: “Imagine for someone sitting in a city looking out over the wall and seeing the massive Mongol horde coming in your direction. 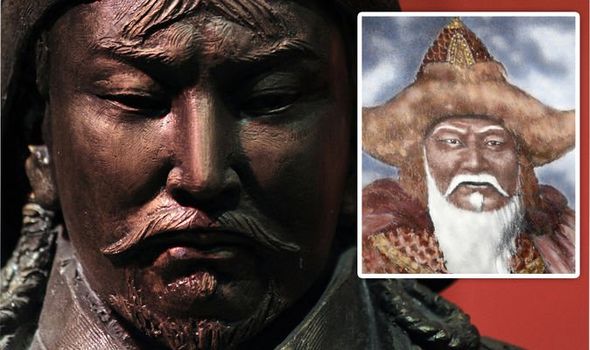 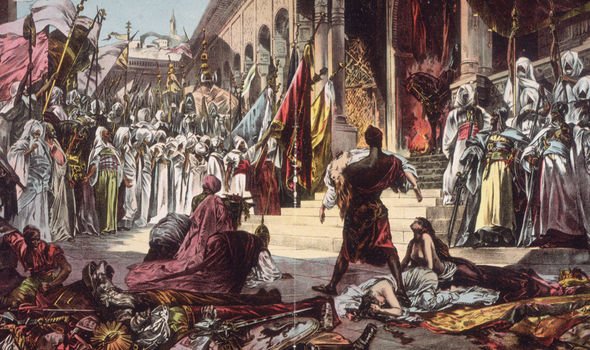 “You have to immediately question yourself ‘Why am I still in this city? I need to leave or I am dead.’”

Khan and the Mongols broke through and massacred more than 100,000 people before they torched the city.

Their success on the battlefield was attributed to the Mongols’ skills on horseback – who could ride as early as three and didn’t need to use reins.

It was claimed that they had such masterful control over their steeds that they could eat, sleep and fire a weapon all while on horseback.

Mr Machowivz said: “It’s the first version of Blitzkrieg – it’s being able to ride into a place, do damage and then disappear before anybody even knows what hit them.” 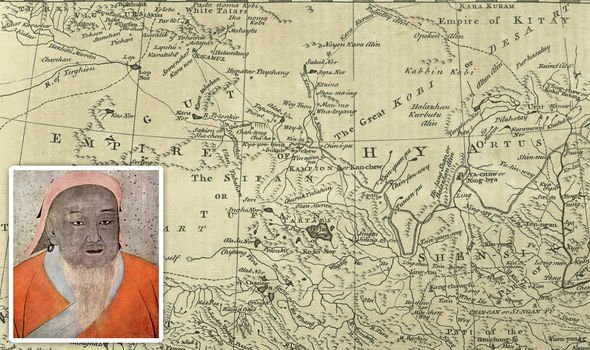 An unearthed eyewitness account from their invasion of Zhongdu was revealed during the 2012 Amazon Prime show ‘Mankind: The Story of All of Us’.

The man, who was an ambassador from the city, wrote: “The earth was greasy from the human fat of the slain.”

The shocking description compounded the legends about the Mongols’ cruelty – their forces being renowned for brutal executions.

Many were decapitated after they invaded a city and it is claimed that a number of towers were made using human skulls.

Khan died in 1227 but in his two-decade long reign he conquered more land than Rome was able to in 400 years – a staggering four-and-a-half-million square miles.

It was claimed that his nation was the first to implement a passport type system to allow horseback riders to deliver messages across their vast empire.

Communication was believed to be the key to their success – with a command post established every 30 miles throughout their land where riders could take a new horse and rest if needed.

A rider would flash the medallion to show their rank – compared with a modern-day passport – and would replenish stocks before he continued on his journey.

(Reuters) – Oil rigs in the United States saw their steepest cuts since February 2015 as crude prices more than halved since the start of the year despite fresh global efforts by producers to cut output to counter a glut triggered by demand destruction from the coronavirus pandemic. Drillers cut 66 oil rigs in the […]

WASHINGTON (Reuters) – A group of former U.S. officials and lawyers is urging Congress to strengthen and clarify law around insider trading that has “generated confusion” and “failed to keep up with the times.” The United States needs a specific law to prohibit insider trading, rather than continuing to rely on rules against fraud and […]

HONG KONG (Reuters) – The Hong Kong Monetary Authority (HKMA) lowered its base rate charged through the overnight discount window by 50 basis points to 1.5% on Wednesday, hours after the U.S. Federal Reserve delivered a rate cut of the same margin. The monetary measures came as policymakers worldwide stepped up efforts to counter the […]

When it comes to Covid-19 vaccines, rich nations are first in line

Looking for a winner, Democrats keep Biden and Sanders on top: Reuters/Ipsos poll