Trade negotiations tend not to begin with two sides in agreement – otherwise there would be nothing to negotiate.

So it’s not surprising to see the UK and EU set out rather different positions before talks begin in earnest.

There are some broad similarities. The two sides agree they want a free-trade agreement, with no tariffs (border taxes on goods) or quotas (limits on the amount of goods). They are also keen to include as much of the service sector as possible.

But that’s the easy bit and this is likely to become a bruising experience for all involved.

Terms and conditions always apply – and there are several possible flashpoints.

First and foremost, the EU wants the UK to sign up to strict rules on fair and open competition, so if British companies are given tariff-free access to the EU market, they cannot undercut their rivals.

These are known as level playing field guarantees and they have been a constant theme in the EU’s negotiating position for nearly two years.

Most importantly, its negotiating directives, adopted on 25 February 2020, say a future partnership must “ensure the application” in the UK of EU state-aid rules on subsidies for business.

The UK would also be required to stay in line with the EU’s rules on environmental policy and workers’ rights in a way that would “stand the test of time”.

But the government has now rejected this approach entirely. The political declaration it agreed with the EU last year did speak of level playing field commitments but, armed with a big majority in the House of Commons, it has toughened up its language.

In a document outlining the UK’s approach to negotiations published on 27 February 2020, it said: “we will not agree to any obligations for our laws to be aligned with the EU’s”.

Instead, Boris Johnson has said he would create an independent system that would uphold the UK’s international obligations and not undermine European standards.

“There is no need for a free-trade agreement to involve accepting EU rules on competition policy, subsidies, social protection, the environment or anything similar,” he said.

He has also pointed out that there are areas such as maternity rights in which the UK has higher standards than the EU and that the UK spent far less money on state aid than Germany or France.

The EU says without a level playing field, it cannot offer any kind of basic free-trade agreement along the lines of the one it has negotiated with Canada.

The UK’s response? A Canada-style deal would be its preference, but if that is not available, it will settle for what Australia has with the EU. In other words, no free-trade deal at all.

The government says it will decide in June 2020 “whether good progress has been possible on the least controversial areas of the negotiations” (which it defines as things like financial services and data) and if not, it will start to focus on preparing for a new relationship without a formal free-trade deal.

Either way, says Mr Johnson, a new relationship will begin on 1 January 2021.

His critics accuse him of recklessness, but the prime minister says he has “no doubt that in either case the UK will prosper”. 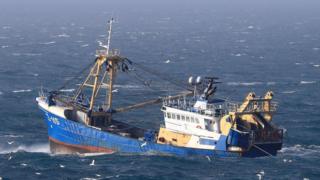 The EU has said an agreement on fisheries must be concluded before any free-trade deal is finalised. That’s because UK fishing waters are among the best in Europe.

The UK says it’s happy to consider a deal on fisheries but it must be based on the notion “British fishing grounds are first and foremost for British boats”.

The EU sees things rather differently.

Its negotiating directives say a future deal should “aim to avoid economic dislocation for [European] Union fishermen that have traditionally fished in United Kingdom waters”.

The EU wants to “uphold” existing access on both sides to fishing waters – language that has strengthened under pressure from EU countries with big fishing fleets.

The EU also seems prepared to link access to fishing waters to the UK’s ability to sell its fish in the EU market.

But the UK also rejects that. Michael Gove told Parliament: “We will take back control of our waters, as an independent coastal state, and we will not link access to our waters to access to EU markets. Our fishing waters are our sovereign resource.”

Fishing is a tiny part of both sides’ economies – in the UK it’s well below 1% – but it has always been an emotional issue. And coastal communities depend on it on both sides of the Channel.

When it comes to product standards and other regulations, the EU is a bit more flexible.

“We’re not asking for alignment, I know it’s a red rag to the UK, so I won’t really mention it,” the EU’s chief negotiator, Michel Barnier said.

“What I am looking for is consistency.”

The UK says it must have the right to diverge from EU rules when it chooses to do so, but it won’t do that just for the sake of doing things differently.

The more it diverges, the more checks there will be and the more barriers to trade will emerge.

One late addition to the EU’s negotiating document is the demand that the UK should stick close to EU rules on food safety and animal health, which is seen by some as a reference to whether the UK might import chlorine-washed chicken from the US in the future.

Similar trade-offs will have to be made in the services sector. UK financial services companies, for example, will lose the passporting rights that gave them unfettered access to the rest of the EU.

Instead, the UK is hoping for a system of what’s known as enhanced equivalence, which would give companies plenty of notice if the rules were about to change.

But talk in government circles of frictionless trade has gone. The UK now accepts that will not be possible outside the EU single market and customs union.

The EU’s negotiating mandate recalls a statement made back in 2018, in which the other 27 member states agreed Gibraltar would not be included in any post-Brexit agreement between the UK and the EU.

It doesn’t rule out a separate deal between the UK and the EU that does cover Gibraltar, but that in turn would have to be agreed by the UK and Spain.

This is another hot-button issue pretty much guaranteed to generate tabloid headlines.

Mr Johnson has said he would be negotiating for what he called the whole UK family, including Gibraltar.

Gaining independence from the rulings of the European Court of Justice (ECJ) was an important part of the argument for Brexit.

Now, the EU is demanding the ECJ be given a legal role in policing any free-trade agreement.

It wants the court to be able to issue binding rulings on disputes between the two sides, when they “raise a question of interpretation of [European] Union law”.

But the government’s outline says it will not allow “the EU’s institutions, including the Court of Justice, to have any jurisdiction in the UK”.

The ECJ does play a limited role in the withdrawal agreement, both in the special arrangements for Northern Ireland and in resolving any disputes over citizens’ rights for the next few years.

But a future trade deal is a different matter.

Devising a dispute-resolution system that satisfies both sides will not be easy.

It’s not just about trade, it’s about internal security co-operation and access to databases too.

“Where a partnership is based on concepts derived from European law,” Michel Barnier said, “obviously the ECJ should be able to continue to play its role in full”.

The EU’s mandate also says there should be “automatic termination” of law enforcement and judicial co-operation in criminal matters if the UK were to opt out of the European Convention on Human Rights.

The bottom line for the UK? The ECJ and the EU’s legal order “must not constrain the autonomy of the UK’s legal system in any way”.

So there are some big divides to be bridged.

Both sides are accusing the other of moving the goalposts and backing away from commitments made in the non-binding political declaration.

Many observers expect a serious row and a possible breakdown in the talks sooner rather than later.

On the other hand, both the UK and the EU say they would settle for a free-trade agreement. The difficult part will be working out how to get there and how to implement it.

It is also worth recalling the government’s own internal analysis from November 2018 suggested a Canada-style deal would leave the economy 4.9% smaller after 15 years than if the UK had stayed in the EU.

There is a long way to go in a short period of time.

UPDATE: This piece was originally published on 4 February 2020 and updated when the UK and EU released their negotiating mandates.

What claims do you want BBC Reality Check to investigate? Get in touch

By Dhara Ranasinghe and David Milliken LONDON (Reuters) – Four European Central Bank policymakers played down the prospect of immediate action to counter the economic impact of the coronavirus epidemic on Thursday, saying it was too early to gauge the long-term implications of the disease. Concerns that the virus could send hard-hit countries such as […]

LONDON (Reuters) – British consumers face higher prices and reduced availability of goods if the government fails to agree pragmatic solutions with the European Union on regulatory checks at ports in any post-Brexit deal, the retail industry’s lobby group warned on Monday. Next month will see the formal launch of negotiations on a new relationship […]

Fed on hold, but will financial risks matter?

Trump to deliver State of the Union address on Feb. 4