Hundreds take to the streets to demonstrate against the postponement of legislative election and the new security law. 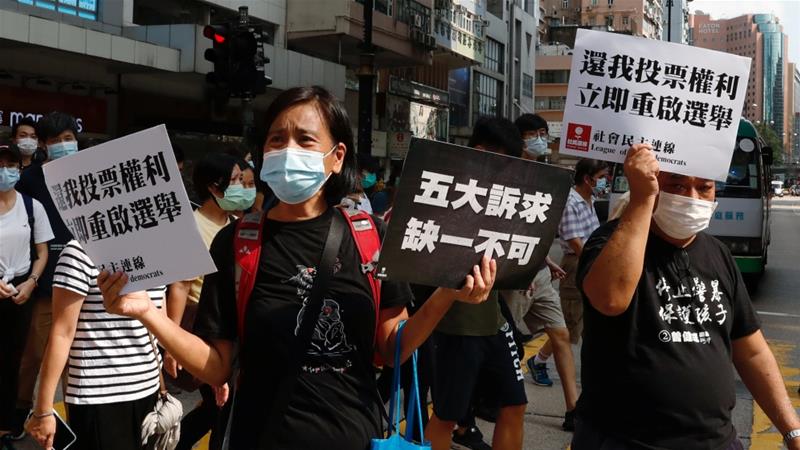 More than 30 people have been arrested by Hong Kong police as riot officers swoop in on pro-democracy protesters – opposed to the postponement of the local legislative election – with rounds of pepper balls.

Hundreds of protesters took to the streets on Sunday in the Asian financial hub to demonstrate against a new national security law imposed by China and the postponement of the legislative poll.

Sunday was meant to be voting day for the city’s partially elected legislature, one of the few instances where Hong Kong voters get to cast ballots.

But Chief Executive Carrie Lam on July 31 postponed the election for one year, citing a surge in novel coronavirus cases. Critics say her government worried the opposition would gain seats if voting was held as scheduled.

The poll would have been the former British colony’s first official vote since Beijing imposed the new security legislation in late June, which critics say aims to quash dissent in the city.

Anti-government protests have been held in Hong Kong almost every weekend since June 2019. They erupted over opposition to a proposed extradition law and spread to include demands for greater democracy and criticism of Beijing’s efforts to tighten control over the city.

Thousands of police were stationed around the bustling Kowloon Peninsula on Sunday as marchers waved placards and chanted popular anti-government slogans such as, “liberate Hong Kong”.

One woman was arrested during a protest in the Kowloon district of Yau Ma Tei on charges of assault and spreading pro-independence slogans, the police department said on its Facebook page. It said such slogans are illegal under the newly enacted National Security Act.

In the Jordan neighbourhood, protesters raised a banner criticising the election delay, the Post said. It put the number of arrests at 33.

“I want my right to vote,” activist Leung Kwok-hung, popularly known as Long Hair, was quoted as saying. The newspaper said Leung was later arrested.

Al Jazeera’s Adrian Brown, reporting from the city, said many people were also carrying out individual acts of defiance across the city, carrying banners or chanting slogans, to protest the new law.

“These acts are remarkable because these individuals are doing that in the face of the sweeping national security law, which makes chants like that, saying things like that illegal,” he said.

“The demonstration was also an unconventional one as people tried hard to blend in with regular shoppers in the heart of the city, and occasionally chanted slogans or make the hand sign of the opposition.” 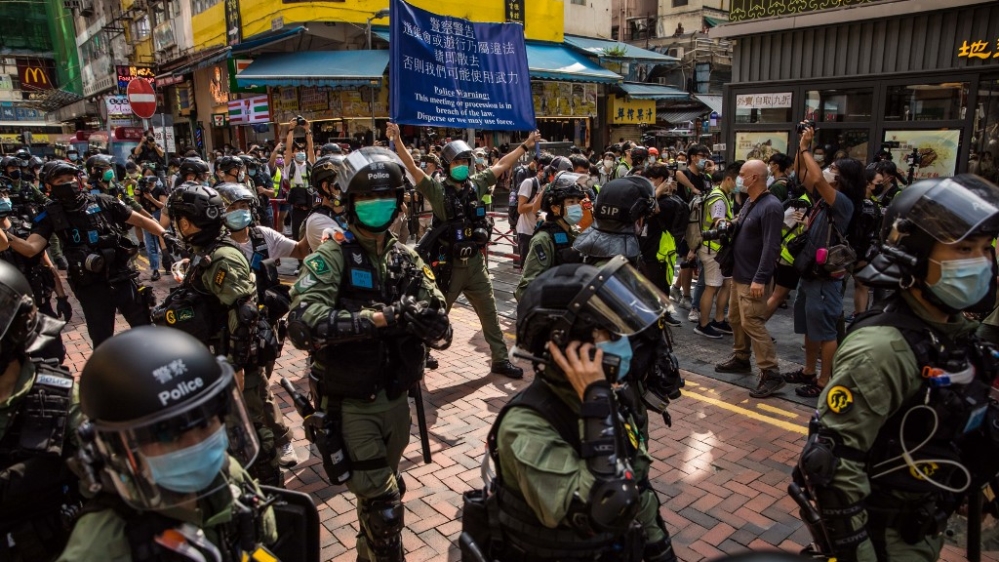 Anti-government demonstrations have declined this year mainly because of limits on group gatherings and the security law that punishes actions China sees as subversive, secessionist, “terrorist” or colluding with foreign forces.

Hong Kong has reported about 4,800 coronavirus cases since January, far lower than in other large cities around the world. The number of new daily infections has fallen substantially from triple digits in July to single digits currently.

Gatherings are currently limited to two people. Police have cited such restrictions in rejecting applications for protests in recent months, effectively preventing demonstrations.

Hong Kong returned to Chinese rule in 1997 under a guarantee of autonomy but critics say the new law undermines that promise and puts the territory on a more authoritarian path.

Supporters of the new security law say it will bring more stability after a year of often-violent anti-government and anti-China unrest and it plugs loopholes in national security left by the city’s inability to fulfil a constitutional requirement to pass such laws on its own.

VIENNA (Reuters) – Vienna Airport <VIEV.VI> launched a savings programme equivalent to a quarter of annual revenue on Friday in response to the travel falloff caused by coronavirus and said state aid will ensure it remains liquid to the end of the year. The group, which is 40% owned by the city of Vienna and […]

Heartbreaking footage recorded on a pet cam shows a cat joyfully reunite with his owner when she comes back home. In the clip uploaded on TikTok by animal lover @glennthebabycat, a dark grey cat bolts out of the corner of the room when he sees his owner's car pull into the drive. Knowing his owner, […]

WASHINGTON (Reuters) – The Treasury Department is mulling using a potential $10 billion emergency coronavirus loan to the U.S. Postal Service to force changes in how it does business, including what it charges for packages, the Washington Post reported on Thursday citing two people familiar with the matter. The Postal Service has said that it […]

Stone sentencing to go ahead amid pardon speculation

Plane crashes in Pakistan with around 100 on board

Iran will support any nation or group that fights Israel: supreme leader

Russia says ‘nothing catastrophic’ about U.S. sanctions on Nord Stream 2