The U.N. warns of looming famines connected to the pandemic. Over 100 cases are connected to an indoor wedding in Maine, including three non-participants who later died.

Officials in West Virginia announced more than 250 new daily cases, raising the state’s seven-day total to its highest level ever.

Here’s what you need to know: 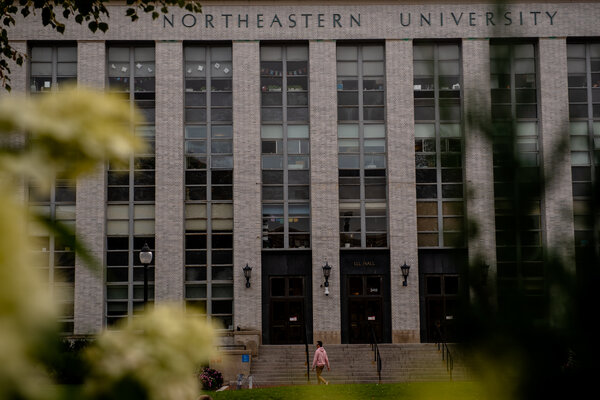 In one of the harshest punishments imposed to date against students for violations of coronavirus safety protocols, Northeastern University dismissed 11 first-year students this week and declined to refund their $36,500 tuition after they were discovered crowded into a room at a Boston hotel serving as a temporary dormitory.

About 800 students are staying in two-person rooms at the hotel, the Westin, which is less than a mile from Northeastern’s Boston campus.

Two university staff members making rounds on Wednesday evening discovered the gathering, which violated university rules against any “guests, visitors or additional occupants,” the university said in a news release.

In addition, the students were not wearing masks or practicing social distancing, in defiance of university requirements, a university spokeswoman, Renata Nyul, said.

Northeastern’s move comes as colleges across the country are struggling to figure out how to stop campus partying, which has already set off outbreaks at a number of schools and shut down some classes. The New York Times has counted at least 51,000 cases in universities and colleges around the country since the start of the pandemic, and many major college towns have become national hot spots.

Most colleges appear to be trying to sway students with warnings and pleas, and relying on peer pressure to moderate behavior, but some are taking a more punitive approach. Purdue University suspended 36 students after a cooperative house was caught partying less than 24 hours after the university president outlawed off-campus parties. At the University of Connecticut, several students were evicted from campus housing over a mask-free dorm bash.

The Northeastern students have the right to contest the action in an “expedited hearing,” the university said.

They were enrolled in a program that normally offers international experiences for first-year students, but some were placed in Boston this fall due to the pandemic.

The dismissed students will not be allowed to attend fall classes remotely, said the spokeswoman, Ms. Nyul, and they must begin once again as first-year enrollees if they come back.

They were notified on Friday that they would have to vacate the hotel within 24 hours, the university said, and before leaving, would have to be tested for the coronavirus at Northeastern. Anyone who tested positive would be moved into “wellness housing” at the university until they no longer had the virus.

Northeastern said that all students in the program had been forewarned of the obligation to practice social distancing and wear masks when among others. “Students who attend an unsafe gathering, social or party, either on or off-campus, can expect suspension,” Madeleine Estabrook, senior vice chancellor for student affairs, had written in a letter to students.

Northeastern had also sent an email warning some incoming first-year students to follow social distancing guidelines. Those students had responded affirmatively to a social media poll asking if they were planning on partying once on campus, according to the Huntington News, Northeastern’s student newspaper. 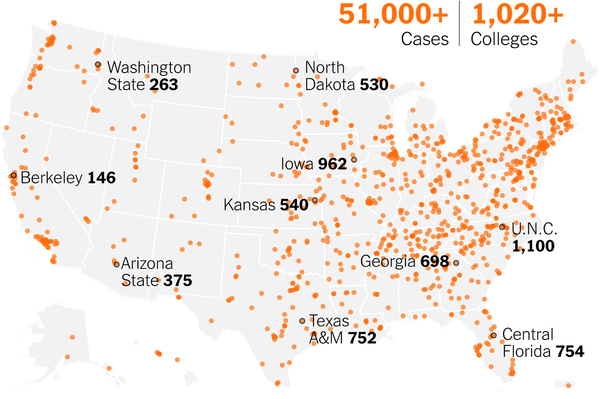 Large new outbreaks emerged on campuses as students returned for the fall semester.

The first famines of the coronavirus era are at the world’s doorstep, U.N. warns.

The first famines of the coronavirus era are looming in four chronically food-deprived conflict areas — Yemen, South Sudan, northeast Nigeria and the Democratic Republic of Congo — the top humanitarian official of the United Nations has warned.

In a letter to members of the U.N.’s Security Council, the official, Mark Lowcock, the under secretary general for humanitarian affairs, said the risk of famines in these areas had been intensified by “natural disasters, economic shocks and public-health crises, all compounded by the Covid-19 pandemic.” Together, he said, “these factors are endangering the lives of millions of women, men and children.”

The letter, which has not been made public, was conveyed by Mr. Lowcock’s office to the Security Council on Friday under its 2018 resolution requiring updates when there is a “risk of conflict-induced famine and widespread food insecurity.” A copy of the letter was seen by The New York Times.

United Nations officials have said before that all four areas are vulnerable to food deprivation because of chronic armed conflicts, and the inability of humanitarian relief providers to freely distribute aid. But the added complications created by the pandemic have now pushed them closer to famine conditions.

In April, David Beasley, the executive director of the World Food Program, the anti-hunger arm of the United Nations, warned the Security Council that, amid the coronavirus pandemic, “we are also on the brink of a hunger pandemic.” In July, his program identified 25 countries that were poised to face devastating levels of hunger because of the pandemic.

By Kate Duguid NEW YORK (Reuters) – The Japanese yen rose versus the U.S. dollar on Monday in a risk-off move spurred by the rise in coronavirus cases. The safe-haven yen <JPY=> was last up 0.73% at 110.74 per dollar, having strengthened to 110.34 earlier in the day. The dollar index <=USD>, which weighs the […]

(Reuters) – Best Buy Co Inc <BBY.N> said on Saturday that the company withdrew all financial guidance for fiscal 2021, for both the first quarter and full year, due to increased uncertainty related to the potential impacts of the coronavirus. The retailer said it drew the full amount of its $1.25 billion revolving credit facility, […]