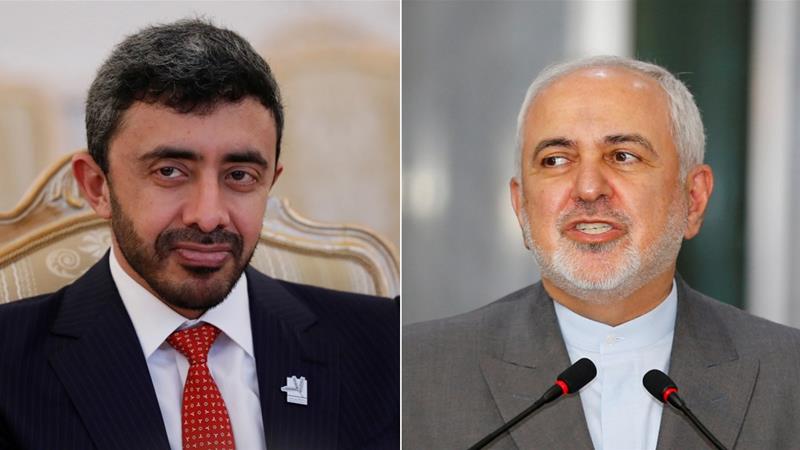 The foreign ministers of longstanding regional foes Iran and the United Arab Emirates (UAE) have held rare talks on several bilateral and regional issues, including the outbreak of coronavirus in the Middle East.

In a video call on Sunday during which they also exchanged greetings for the Muslim Eid al-Adha holiday, Sheikh Abdullah bin Zayed al-Nahyan told his Iranian counterpart that strengthening bilateral cooperation was important in tackling COVID-19, according to WAM, the Emirati, state news agency.

For his part, Mohammad Javad Zarif, Iranian foreign minister, said in a Twitter post that it was “a very substantive, frank and friendly video conversation” on COVID-19 as well as “bilateral, regional and global situations”.

“We agreed to continue dialogue on theme of hope – especially as region faces tough challenges, and tougher choices ahead,” he wrote.

We agreed to continue dialog on theme of hope—especially as region faces tough challenges, and tougher choices ahead. pic.twitter.com/lPNsujwtM3

Iran has long been at odds with the UAE and Saudi Arabia, Gulf Arab allies of the United States.

Tensions between decades-long rivals Washington and Tehran have been on the rise since 2018, when US President Donald Trump withdrew from a nuclear deal signed in 2015 between Iran and world powers and reimposed crippling sanctions on the Iranian economy.

Washington blamed a series of attacks against oil interests in the Gulf last year on Iran, while the UAE did not publicly hold a particular country responsible. Iran denied the allegations.

The two ministers also held a telephone call in March in which Sheikh Abdullah expressed the UAE’s support for Iran during the coronavirus outbreak.

Iran, battling the Middle East’s deadliest outbreak, on Sunday also reported its highest single-day infection count in nearly a month, warning that most of its provinces have been hit by a resurgence of COVID-19.

It has so far registered more than 309,000 confirmed cases and 17,000 related deaths, while the UAE has recorded nearly 61,000 infections and 351 fatalities from the coronavirus.

By Gabriel Crossley and Stella Qiu BEIJING (Reuters) – The spread of the coronavirus in South Korea and Japan could mean a second wave of disruption at Chinese factories after the disease triggered a record contraction in activity last month. Cases of the flu-like epidemic have jumped in South Korea and Japan, prompting some manufacturers […]

Russia's leader of the Church of the Flying Spaghetti Monster has been arrested amid claims he's an opposition im-pasta. Mikhail Iosilevich, 43, faces up to six years in prison after pledging allegiance to a god made of spaghetti and meatballs. The head of the country's "pastafarians" won a legal battle for the right to pose […]

By John Whitesides and Julia Harte WASHINGTON (Reuters) – The drive to expand vote-by-mail options during the coronavirus pandemic has emerged as the centerpiece of a growing political fight ahead of November’s election. President Donald Trump and his Republican allies have attacked the idea of expanding mail balloting, arguing it is vulnerable to fraud and […]

Chevron asks staff to postpone all non-essential travel to China