Storm Francis is the latest storm to create havoc across Europe, first impacting the UK and Ireland before tracking towards the rest of the continent. Deadly winds and catastrophic rainfall are forecast, with storms bringing hail and danger to life warnings.

In the UK, the Met Office has issued yellow and amber weather warnings for wind as Storm Francis hits, with very strong winds up to 70mph forecast to bring disruption today.

Yellow rain warning are also in place as Francis dumps torrential downpours across the country, with more than three inches possible.

The Met Office said gusts of 74mph have been recorded at Lake Vyrnwy in Powys, Wales – the highest August gust in this location since 1994.

As Francis tracks over the UK, the next area in its sights is France, with severe winds expected. 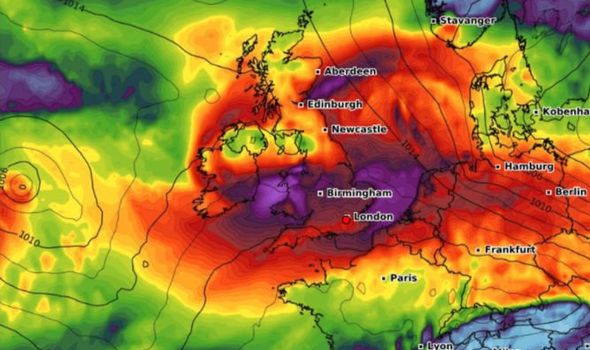 Severe Weather Europe warns: “Moderate (MDT) risk has been issued for southeastern Ireland into Wales and across southern England towards northern Belgium and the Netherlands with a threat for severe damaging winds, and heavy rainfall.

“Associated with a strong surface low and frontal system, widespread severe winds are expected to push across the risk area.

“Some isolated convective squalls are possible in the wake of the low over Ireland and Northern Ireland towards Wales and northern England.” 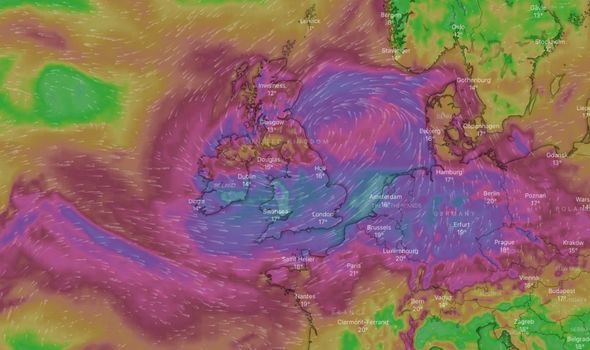 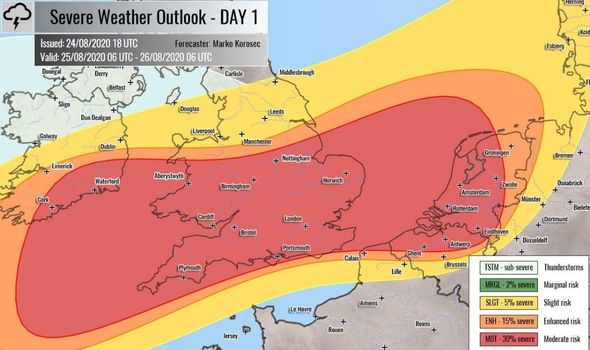 Storm Francis is forecast to reach the North Sea by Wednesday morning when the central pressure will be rising and the system weakening.

The system will gradually track east-northeast, reaching Benelux and the North Sea.

The forecasters warn: “Heavy rain squalls are possible with the most robust storms, while severe damaging winds will remain the primary threat.”

Enhanced and Slight Risks have been issued by Severe Weather Europe for areas which surround the Moderate Risk area.

These include extreme northeast France, Belgium, northwestern Germany, and Denmark with a more isolated threat for severe winds, and heavy rainfall.

Storm Francis will then continue to track its way steadily eastwards during the early hours of Wednesday.

The worst of Storm Francis will be felt across the UK, with homes flooded, rail lines blocked and campers rescued today. 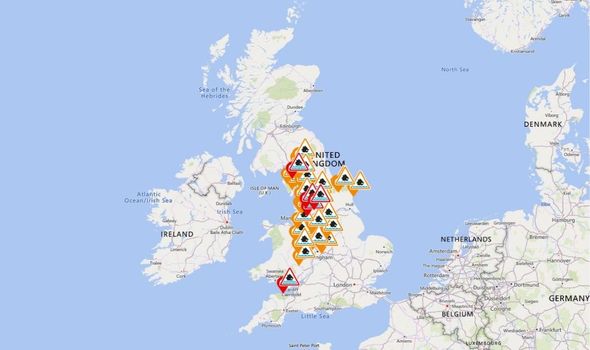 Emergency services have already warned the public to take extra care in the stormy conditions across the UK, particularly along the coast.

Fire crews had to rescue holidaymakers from a flooded campsite in the town of St Clears, Carmarthenshire, after river levels rose in the area.

A number of homes in Wales were also said to have been hit by flooding in Llanelli, Neath, Whitland and Tonyrefail, while some roads across the country were left underwater.

The Met Office has never had two named storms in August since the process started in 2015, but Francis comes on the back of Ellen, which struck last week and caused power outages.

RAC Breakdown spokesman Rod Dennis said that until the middle of Wednesday, drivers need to brace themselves for some “very unpleasant” conditions on the roads.

He said: “An amber weather warning covering a swathe of western Britain means there is a real risk of disruption to journeys from flying debris such as tree branches.

“Surface spray and perhaps some localised flooding are also possible.”

Across the UK there are five flood warnings in place, and 34 flood alerts as Storm Francis unleashes torrential rain.

Explainer: Why Iowa? How one rural state picks presidential nominees

By Ginger Gibson WASHINGTON (Reuters) – Utilizing a complicated in-person caucus system, the first contest in the Democratic presidential primary will take place in Iowa on Feb. 3. Iowans do not use paper ballots, but instead hold meetings across the state to pick their choice for president. There are 12 Democrats running for their party’s […]

(This Feb. 5 corrects story to remove erroneous reference to non-British Airways IAG airlines not flying to China in paragraph five) By Alexander Cornwell DOHA (Reuters) – The coronavirus epidemic will have a only a marginal impact on global travel demand and the airline industry is healthy enough to absorb any economic slowdown in China, […]

As city encroaches on Nairobi park, wild animals freedom to roam is under threat

NAIROBI (Reuters) – Rhinos, lions, buffalo and leopards range against the background of a city skyline in the Nairobi National Park, Africa’s only game reserve within a capital city. The park has been fenced in on three sides as the city mushroomed around it. Outside its unfenced southern boundary, the banks of the Mochiriri River […]