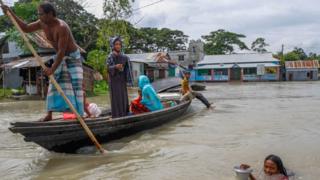 Anchal Kumari looked on helplessly at thousands of people displaced by floods around her village in the Madhubani district of Bihar state in northern India.

In normal times, Ms Kumari, a volunteer humanitarian worker associated with Oxfam, would be distributing relief materials to affected communities during disasters like this.

“But this time, we have no relief materials to distribute to people and I find it so frustrating,” the 20-year-old told the BBC.

“People are living miserable lives here and they ask me why they are not receiving any help, and I have no answer.”

Bihar is one of the worst-hit states in India during the ongoing Monsoon floods. The country has seen more than 850 people dead and tens of millions displaced across the country.

Monsoon rains last from June to September and they bring miseries for large number of people in South Asian countries every year. Many parts of India this month have seen excess rainfall, some up to 60%, according to the Indian Meteorological Department. More than 1,300 people have died and around 25 million have been affected in the region, according to government and humanitarian agencies.

“People in my district are sleeping on highways and other higher grounds to remain safe from floodwaters for more than four weeks now,” Ms Kumari said.

“And it’s not just our organisation. There are several others that would have been active in situation like this, but this time they have been able to do nothing.”

Humanitarian agencies say Covid-19 restrictions have severely hampered and slowed down relief operations in many places hit by Monsoon floods and landslides across South Asia. Relief workers have been restricted in their movements by localised lockdowns, while stocks of emergency supplies have been rendered inaccessible by strict containment zones.

“Most of our relief materials are stored in warehouses and if such warehouses happen to be in places declared as containment zones by authorities, then it becomes very difficult to get such materials,” said Pankaj Anand, head of programmes for Oxfam India.

And even where supplies have been accessible, supply chains have been disrupted by lockdowns, agencies say. After dealing with all those logistical difficulties and reaching affected areas, staff had then being asked to quarantine, said Mr Anand.

“What we do is about agility, we need to be on the ground to provide relief within 24 to 48 hours,” he said, “but Covid-restrictions has painfully slowed everything and in many places it has become impossible as well.”

Providing shelter space had also become more complicated during the coronavirus pandemic, with up to three times as much space needed as usual to accommodate social distancing regulations.

Some relief agencies in Nepal have said that government passes meant to allow them to bypass restrictions have not always worked.

“We travel carrying permission-papers from the relevant government agency but security personnel on the ground have no idea about what we do, and they just stop us,” said Dipak Chapagain, a coordinator with Volunteer Corps Nepal.

“There is a complete disconnect between the government agency that regulate us and security personnel who enforce lockdown and other Covid restrictions,” Mr Chapagain said.

He said he and his team were recently detained by the police for nearly six hours when they were on their way to provide relief materials to families displaced by a massive landslide in the northeast of Kathmandu.

About 230 people have died and about 60 others are missing in Nepal due to Monsoon-induced landslides, according to the Home Ministry.

And where relief materials are short in supply, needy people can end up desperate to secure aid when it arrives.

“In some places, as soon as we arrive, people gather in huge numbers without wearing masks and without maintaining social distance,” said Nanida Saikiya of Satra, a non-government organisation that has provided limited relief materials to flood-displaced communities in Dorang district of Assam state in India.

“Some of our colleagues have been really worried about transmission of Coronavirus and many of them therefore want to stay on leave these days,” he said.

Members of communities in several flood impacted places in Assam said they were still waiting for relief three weeks after the worst flooding so far this season.

‘No relief this time’

Lal Banu, a resident of Oporia village in Dorang district of Assam, could not buy anything to stock for the flood season this time because no one bought her vegetables for fear of coronavirus.

That left her with no money, and when the floods came her house and her possessions were swept away.

“That is why I am in so need of relief materials but I have received nothing – neither from the government nor from humanitarian agencies,” she said in a tearful voice.

“During previous monsoons, they used to be here to help us but this time no one has come.”

Just across the border of Assam is Bangladesh, where about five million people have been displaced by floods according to the Red Cross. Humanitarian workers overcrowding was common at embankments and temporary shelters.

“It has been a difficult experience than what it used to be during previous monsoons,” said Azmat Ulla, the International Federation of Red Cross lead in Bangladesh.

“But our volunteers are usually from local communities and that has helped us in carrying out relief operations. For organisations that send relief workers from the centre, it has been really challenging,” he said.

Authorities in the region said they were co-ordinating with their local administrations to overcome the challenges.

“We have been in constant touch with our state disaster management authorities in different states of India,” said GVV Sarma, a member secretary of India’s National Disaster Management Authority.

“We have utilised our cyclone centres to shelter flood impacted communities and the number of such shelters is double the normal figure because of Covid-19 social distancing guidelines.”

More rains, some of them very heavy, have been forecast for this coming week in several parts of the region.

India’s Central Water Commission, as of Monday, has listed 26 sites as being in severe flood situations, in mainly Bihar, Uttar Pradesh and Assam states. Beyond the immediate danger of the floodwaters is danger of disease.

“After peak floods, impacted communities could also suffer from water-borne diseases like cholera,” said Mr Regmi, of the International Federation of the Red Cross, India.

“The fear is whether people will be left untreated if there is no supply of essentials like medicines and if hospitals, already overwhelmed by Covid-19 patients, are unable to treat them either,” he said.

By Svea Herbst-Bayliss NEW YORK (Reuters) – Activist investor Clifton S. Robbins told clients on Friday that he is shuttering his Blue Harbour Group not because investors want their money back or because returns have lagged, but because he wants to do something different. “Our investors are very happy, and my energy and productive years […]

By Jane Lanhee Lee (Reuters) – Airbnb lowered its internal valuation by 16% to $26 billion, as the U.S. home rental firm grapples with a slowdown in bookings due to the global spread of the coronavirus pandemic, a source familiar with the matter told Reuters on Thursday. Airbnb was valued at $31 billion in its […]

By Sarah N. Lynch WASHINGTON (Reuters) – The Democrat-controlled U.S. House of Representatives Judiciary Committee on Friday said it is seeking interviews with current and former federal prosecutors who may have knowledge of political meddling in criminal cases, including the four career officials who earlier this month quit the Roger Stone case. In a letter […]