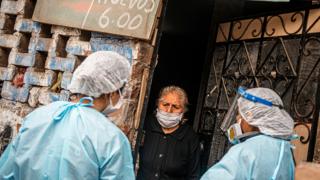 Coronavirus is continuing its spread across the world, with more than 22 million confirmed cases in 188 countries. About 800,000 people have lost their lives.

Cases of the disease are continuing to surge in many countries, while others which had apparent success in suppressing initial outbreaks are now seeing infections rise again.

Confirmed cases around the world


Please upgrade your browser to see the full interactive

Note: The map, table and animated bar chart in this page use a different source for figures for France from that used by Johns Hopkins University, which results in a slightly lower overall total. US figures do not include Puerto Rico, Guam or the US Virgin Islands.

Where are cases and deaths rising?

Latin America and Asia currently have the highest numbers of confirmed cases.

Brazil has the second highest number of cases in the world, after the US, and has recorded more than 110,000 deaths.

Mexico has the second-highest death toll in the region with about 60,000 deaths and cases have also risen rapidly in Colombia, Peru, Argentina and Venezuela.

In the Middle East, Iran has been badly affected by the virus and d Documents leaked to the BBC Persian service suggest the actual death toll is more than double the official total of 20,000. Neighbouring Iraq is now also seeing a spike in cases.

In Asia, India has recorded nearly three million cases and has been averaging more than 60,000 new infections each day. About 55,000 people have died, which amounts to the world’s fourth highest death toll.

Africa has recorded more than a million confirmed cases, although the true extent of the pandemic in the continent is not known. Testing rates are reported to be low, which could distort official estimates.

South Africa and Egypt have seen the largest outbreaks so far, with South Africa one of only eight countries in the world to record more than 500,000 confirmed cases.

France, Spain, Italy and Germany have recorded their highest numbers of daily cases since the spring in recent days, and the World Health Organization (WHO) has warned of a resurgence of the disease in Europe.

Hans Kluge, the director general of the WHO’s Europe office, said the rise in cases was “due in part to the relaxation of public health and social measures … people have been dropping their guard”.

A number of countries have re-imposed localised lockdowns in their worst-affected regions, and there have been renewed appeals for people to wear face coverings and follow social distancing rules.

The pattern of rising infections following the end of lockdown restrictions is not limited to Europe. Other countries that have also seen a recent resurgence of the virus include Israel, Peru, Australia and Japan.

In the table below, countries can be reordered by deaths, death rate and total cases. In the coloured bars on the right-hand side, countries in which cases have risen to more than 5,000 per day are those with black bars on the relevant date.

This information is regularly updated but may not reflect the latest totals for each country.

** The past data for new cases is a three day rolling average. Due to revisions in the number of cases, an average cannot be calculated for this date.

Cases in the US have slowed after second surge

The US saw an increase in the number of daily cases to record levels in July but the numbers have stabilised and fallen since then.

The death toll stands at more than 170,000 – more than a fifth of the reported coronavirus deaths around the world.

The University of Washington predicts the death toll could hit more than 295,000 by the beginning of December – though it says this could be reduced to about 230,000 if 95% of Americans wore masks in public.

The outbreak has had a devastating impact on the US economy, with GDP falling by a record rate of 33% in the three months from April to June.

How did coronavirus spread?

The virus, which causes the respiratory infection Covid-19, was first detected in the city of Wuhan, China, in late 2019.

The outbreak spread quickly across the globe in the first months of 2020 and declared a global pandemic by the WHO on 11 March.

A pandemic is when an infectious disease is passing easily from person to person in many parts of the world at the same time.

Europe and North America saw their first major outbreaks in April but as they began to ease, Latin America and Asia started seeing cases spike.

Governments across the world have been forced to limit public movement and close businesses and venues in a bid to slow the spread of the virus. This has had a devastating impact on the global economy.

The International Monetary Fund has said the world is in the midst of the worst recession since the Great Depression and warned that it could take two years for economic output to return to pre-pandemic levels.

The United Nations has said that up to 265 million people could face starvation by the end of the year because of the impact of Covid-19.

The data used on this page comes from a variety of sources. It includes figures collated by Johns Hopkins University, data from the European Centre for Disease Prevention and Control, national governments and health agencies, as well as UN data on populations.

When comparing figures from different countries it is important to bear in mind that not all governments are recording coronavirus cases and deaths in the same way. This makes like for like comparisons between countries difficult.

Other factors to consider include: different population sizes, the size of a country’s elderly population or whether a particular country has a large amount of its people living in densely-populated areas. In addition, countries may be in different stages of the pandemic.

By Alex Lawler LONDON (Reuters) – OPEC slashed on Wednesday its forecast for global growth in oil demand this year due to the coronavirus outbreak and said more revisions might follow, underlining the deepening impact of the virus on the market days after a pact on output cuts collapsed. The Organization of the Petroleum Exporting […]

BRUSSELS (Reuters) – Growth of global trade in services has weakened at the start of 2020 as the coronavirus hits the global economy, notably air travel and container shipping, the World Trade Organization (WTO) said on Wednesday. The Geneva-based trade body said its services trade indicator fell to 96.8 from the 98.4 reading reported in […]

Yemen explained: What is happening in Yemen?

We will use your email address only for sending you newsletters. Please see our Privacy Notice for details of your data protection rights. There has been a conflict in Yemen for many years and it’s having a devastating impact on people living there, and especially young children. So what’s happening in Yemen and why are […]

ECB did not even discuss a rate cut on Thursday: sources

Brexit’s back: double-whammy for sterling after virus shock

This is another News Portal > World News > Brexit’s back: double-whammy for sterling after virus shock