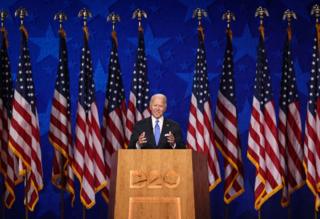 Joe Biden has made his first major speech as the Democratic presidential nominee at the party’s convention.

He said President Trump had “cloaked America in darkness” and made several claims about his record in office, including his handling of the coronavirus pandemic.

We’ve taken a look at three of these claims.

The US does have the highest number of coronavirus cases and deaths in the world, with more than 5.5 million confirmed cases and 174,000 deaths, according to Johns Hopkins University.

It also has a larger population than many other countries.

If you look at deaths per capita – as a proportion of each country’s population – the US is no longer top of the list but remains in the top ten worst hit countries.

The US has recorded more than 52 coronavirus deaths per 100,000 people – according to Johns Hopkins University – but there are a handful of countries that have recorded more on this measurement, including the UK and Italy.

It is worth remembering that there are differences in how countries count coronavirus deaths, making exact comparisons difficult.

Claim 2: “More than 50 million people have filed for unemployment this year.”

Mr Biden was talking about the impact of the pandemic on the US economy.

The 50m figure is right and is based on the total number of Americans who have filed jobless claims since the virus struck, according to US Labor Department statistics.

The number of people currently claiming unemployment benefits is 14.8m, according to the latest release of weekly figures. It has been declining since May, when there were more than 20m claims.

The unemployment rate is still much higher than pre-pandemic levels and currently stands at 10.2%.

A further 12% said they had closed temporarily, but even accounting for these it is less than then one in six Mr Biden claimed.

Claim 3: President Trump said there were “very fine people on both sides”, when asked about a far-right rally in 2017.

Mr Biden said one of his goals would be to “wipe out the stain of racism” and he recalled the far-right protests in Charlottesville, Virginia in 2017 which led to violent clashes and left one counter-protester dead.

He said: “Remember what the President said when asked, he said there were, quote, very fine people on both sides”.

Mr Biden said that after this moment “I knew I had to run” for president.

According to a transcript of a press conference on 15 August, President Trump did say – when asked about the presence of neo-Nazis at the rally – “you had some very bad people in that group, but you also had people that were very fine people, on both sides.”

During the same press conference, Mr Trump went on to say “I’m not talking about the neo-Nazis and the white nationalists, because they should be condemned totally.”

Send us your questions

Covid 19 coronavirus: No new community cases, one in managed isolation

There are no new Covid community cases as Auckland basks in level 1 freedoms. The Ministry of Health says that all contacts connected to the Valentine’s Day outbreak have been tested and returned negative results. Meanwhile, there is one new case in managed isolation – a passenger who returned from India through the United Arab […]

(Reuters) – Tiffany & Co <TIF.N> said on Wednesday Australian regulators have sought more time to review LVMH’s <LVMH.PA> multi-billion dollar purchase of the U.S. jeweler due to the coronavirus outbreak, potentially delaying closure of the deal. The France-based owner of luxury brands such as Louis Vuitton offered to buy Tiffany for $16.2 billion last […]

Traffic is at a standstill both northbound and southbound on sections of Auckland’s Southern Motorway after crashes this afternoon. The right hand lane of the motorway was blocked due to a crash around 1pm near the Tecoma St off-ramp. While the lane has now been reopened, traffic is backlogged. One motorist told the Herald the […]