There is no escaping from the trauma in Beirut. Hospitals inundated with victims of the explosion are now filling with protesters injured by the security forces.

Firas Hamdan told me he was out on the streets protesting last Saturday, and while filming a live broadcast on Facebook he was almost killed.

You can see the explosion in the centre of the crowd; a metal pellet from what it’s thought was a grenade pierced his heart. 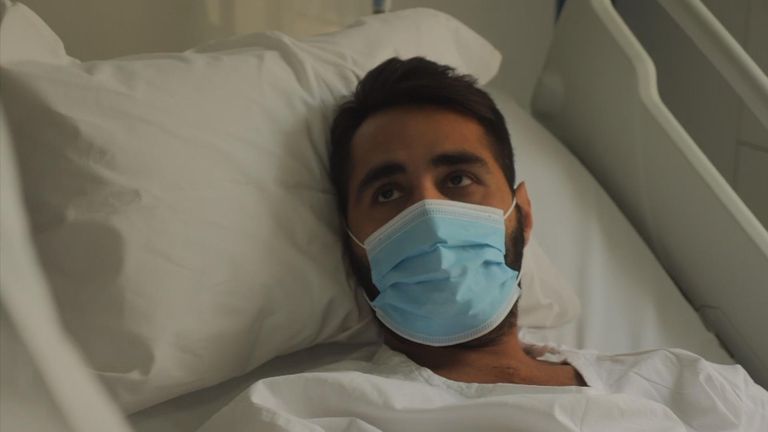 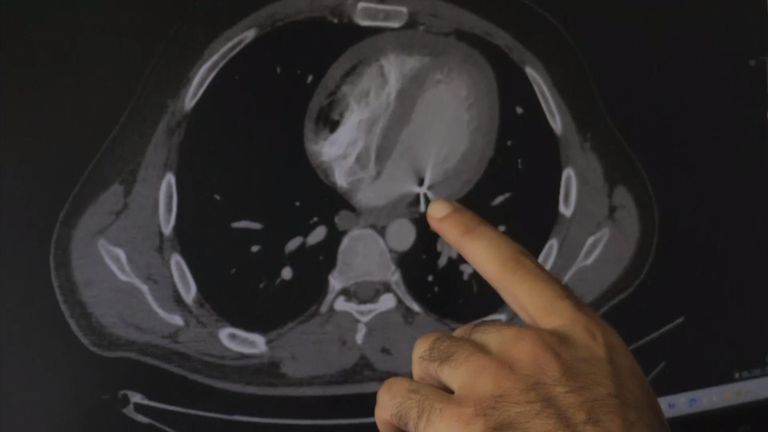 “I walked for two metres and I shut down,” he said.

“I collapsed on the earth and the other colleague brought me here. I’m lucky that I’m alive.”

Pierced from side to side with the fragment lodged in the posterior wall of his heart, Firas underwent emergency surgery.

His X-ray clearly shows where the pellet entered his chest. Amazingly he will make a full recovery.

Dr Kareem Nehme has been treating him at Beirut‘s Hotel-Dieu Hospital and says he has seen more than 50 patients wounded in the protests.

“All the injuries were on the upper part of the body,” he said. 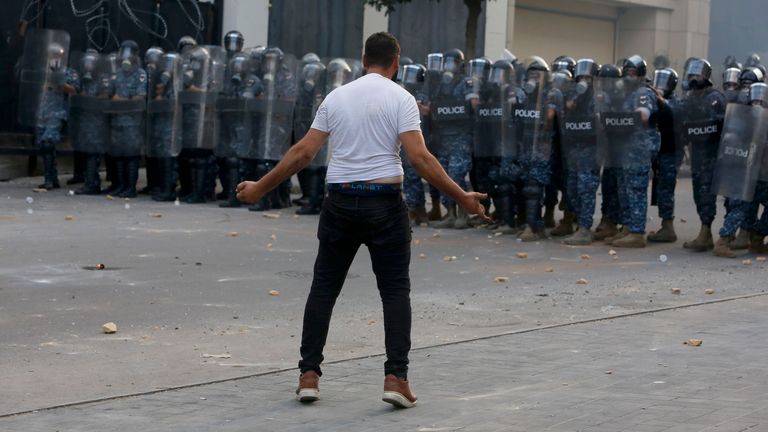 Many of the injuries are too graphic to show.

Lebanon‘s anti-government protests erupted – once again – after the explosion at the port devastated huge swathes of the city and killed at least 178 people.

But human rights activists and doctors claim the methods deployed here by the security services are in breach of international law. 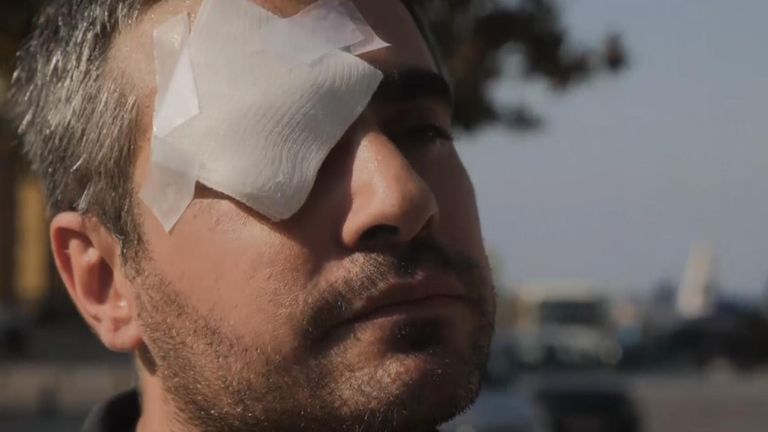 Rabie Barakat bears the scars from the tear gas canister which appeared to have been fired directly at his face.

He returned to the place where it happened to explain what he remembers.

“I had no idea whether this was live ammunition, rubber bullets or a tear gas bomb,” he said.

We witnessed the incident and our camera recorded the moments after the canister struck as medics rushed to help him.

Human Rights Watch observed the protests first-hand. It has conducted its own investigation and has spoken to many victims and doctors. It says the evidence is damning.

Aya Mazjoub, a Lebanon researcher for the organisation, told Sky News: “The evidence is overwhelming.

“They fired incredibly large amounts of tear gas and they fired some tear gas canisters directly at protesters’ heads.”

The Lebanese authorities have denied they used excessive force but in this country hollowed out by years of corruption – where people have no faith in the government – it is a response that is unlikely to be believed.

SpaceX: Camera feed freezes upon Starship SN11 landing When you subscribe we will use the information you provide to send you these newsletters. Sometimes they’ll include recommendations for other related newsletters or services we offer. Our Privacy Notice explains more about how we use your data, and your rights. You can unsubscribe at any time. […]

(Reuters) – A Canadian court on Monday denied a media consortium’s request to broadcast a portion of hearing seeking to extradite Huawei Technologies Chief Financial Officer Meng Wanzhou to the United States. The consortium’s application, which Meng and the Attorney General of Canada opposed, sought to record and broadcast the “double criminality” portion of the […]

LISBON/MADRID (Reuters) – The chairman of the Portuguese unit of Spain’s largest bank, Santander, Antonio Vieira Monteiro, died from the coronavirus on Wednesday, the second victim of the disease in Portugal, a source familiar with the matter told Reuters. Vieira Monteiro, 73, became chairman of Santander Totta in 2019 after seven years as chief executive. […]

This is another News Portal > Business > COVID-19: Easyjet reports 200% rise in flight searches as rules eased for Christmas