Turkey warns Greece of retaliation if attacked amid claims in energy-rich region as Ankara accuses Paris of ‘bullying’. 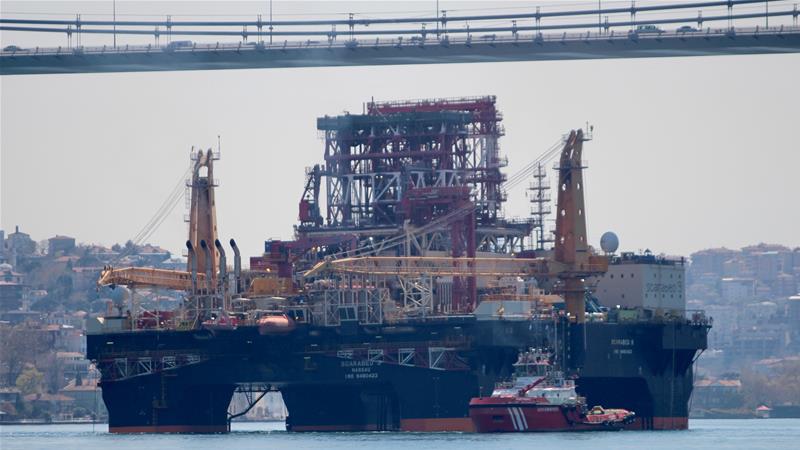 Turkey has warned Greece of retaliation against any attack on its survey vessel in the eastern Mediterranean and accused France of acting like a bully amid escalating tensions in the energy-rich region.

Speaking to reporters after Friday prayers in Istanbul, Turkish President Recep Tayyip Erdogan said one of the warships accompanying the exploratory Oruc Reis vessel, the Kemal Reis, had “given the necessary response” to an attack on Thursday.

“If this continues, they will receive their answer in kind,” he said, without specifying which nation’s ships had allegedly attacked Turkey’s. “We can’t let even the smallest attack go without an answer.”

Turkey and Greece are vehemently at odds over overlapping claims for hydrocarbon resources in the increasingly volatile region.

Tensions rose on Monday after Ankara launched exploration operations in a disputed area of the Mediterranean by sending a seismic vessel accompanied by a small navy fleet into the region.

Greece responded by dispatching its own military assets, resulting in a mild collision of Greek and Turkish warships during the standoff on Wednesday.

Greek defence sources said it was an accident but Turkey called it a provocation.

Turkey’s warning to Greece came as the European Union’s foreign ministers are meeting on Friday to address the emerging crisis, which has pitted Ankara against its uneasy NATO ally and the entire EU bloc.

Meanwhile, France on Thursday also announced it was “temporarily reinforcing” its military presence in the eastern Mediterranean in support of Greece.

The decision to send in reinforcements has only added to tensions between Paris and Ankara – already high because of opposing approaches to the Libya conflict and other parts of the Middle East – and saw the diplomatic rhetoric rise another notch.

“France especially should avoid steps that will increase tensions,” Turkish Foreign Minister Mevlut Cavusoglu said during a visit to Switzerland on Friday.

“They will not get anywhere by acting like bullies, whether in Libya, the northeast of Syria, in Iraq or the Mediterranean.”

Cavusoglu insisted that Turkey was looking for a peaceful solution to the crisis and was only expecting “common sense” from Greece.

“Of course we do not wish to escalate, but Greece should act with common sense,” said Cavusoglu. “We are always on the side of peaceful dialogue.”

In their meeting, EU foreign ministers are widely expected to reaffirm their support for Greece’s interpretation of maritime boundaries and to urge all sides to respect international law.

But Turkey says Greece is using its control of a few tiny islands off the coast of Turkey to claim an outsized share of the Mediterranean Sea.

Germany has taken a leading role in trying to mediate the dispute. Erdogan had followed German Chancellor Angela Merkel’s urgings and suspended the Oruc Reis mission last month to give talks another chance.

Greece then signed a maritime agreement with Egypt that appeared to be aimed at countering a similar deal Turkey had signed with the United Nations-recognised government in Libya last year.

The Egyptian deal was quickly followed by Erdogan’s decision to push ahead with the Oruc Reis mission this week.

“These tensions are worrying,” Merkel’s spokesman Steffen Seibert said on Friday. “What’s important is de-escalation” and for countries “to talk directly to each other”.

On Thursday, Erdogan said he agreed with Merkel to “develop a process of protective understanding” with Greece.

“Merkel, after speaking to me, spoke to [Greek Prime Minister Kyriakos Mitsotakis]. I hope she has expressed the line to him discussed with us.”

Chronis Kapalidis, a security expert at United Kingdom-based think-tank, Chatham House, told Al Jazeera that Greece has expressed its readiness to sit at the table but warned that talks would be compromised if the two nations continued with their military build-up in the volatile region.

“You cannot have diplomatic discussion while you have naval vessels confronting each other in a small geographic area,” Kapalidis said.

An eerie new clue in the disappearance of Cleo Smith has suggested that the little girl was snatched from her family's tent as they all lay sleeping. Police have now revealed that little Cleo was too small in stature to be able to reach the zipper of the tent, which was found open by her […]

By Hugh Bronstein BUENOS AIRES (Reuters) – Argentina’s government has struck a deal with domestic bondholders to swap around 200 billion pesos ($3.2 billion) in local currency debt in a major planned auction on Thursday, the country’s Economy Minister Martin Guzman told Reuters. The scheduled swap, which is offering new instruments that expire between 2021 […]

Trump says he is eyeing four candidates for intelligence chief