Belarusians are voting on whether to grant their authoritarian president a sixth term in office today. The election pitted President Alexander Lukashenko against a former teacher who emerged from obscurity to lead the biggest challenge in years against the man who has ruled the country for a quarter of century. But what did the results reveal?

A preliminary exit poll has given Belarus’ longtime authoritarian leader nearly 80 per cent of the vote, according to Russian media reports.

The main opposition candidate Svetlana Tikhanovskaya received 6.8 percent of the vote based on the official exit poll.

The polls closed at 7pm CET (6pm BST), but voting will continue as people continued to queue in the capital city, Minsk. 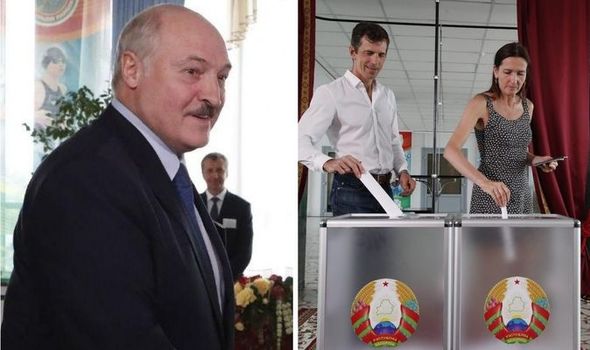 Alexander Lukashenko is expected to claim victory according to the latest exit polls.

He has consolidated immense power over his 26 years in office, but in recent weeks has incurred anger over vote rigging is likely to trigger a backlash.

The opposition candidate for president was forced into hiding the night before challenging the president in the country’s most unpredictable election in a generation.

Ms Tikhanovskaya reportedly left her apartment after police detained two senior staffers and seven other campaign members in what they called an attempt to scare the opposition before the vote.

She then re-emerged at a polling station on Sunday afternoon alongside an entourage of campaign staff and journalists who were there for her safety. 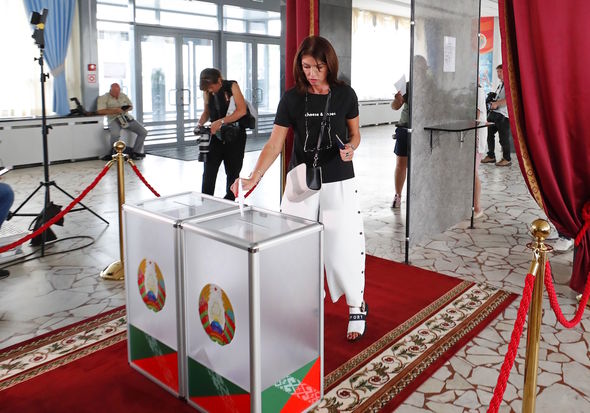 Her press secretary told reporters: “We can’t defend ourselves physically against armed people or the security services.

“This is the most trustworthy defence we have.”

At a Minsk polling station, Mr Lukashenko played down the threat posed by a united opposition.

The Central Election Commission in Belarus said that there was 79 percent turnout by 6pm CET  (5pm BST).

The head of the election commission Lidia Yermoshina called on the losing presidential candidates to accept defeat calmly.

In addition she urged contenders to congratulate the winner and not “agitate” the masses.

She said: “In my opinion, it is a big political deception of the voters for the sake of discrediting results of the election. I’ve said it many times.

“In essence they are creating a shadow Central Election Commission, some agency that can count votes from the voters willing to submit their votes.

“All of it will be later touted as some alternative sample.

“Attempts will be made to extrapolate the results onto the entire territory of the country. And it is the linchpin for staging mass riots.”

Don’t miss a thing! Sign up to the Daily Star’s newsletter We have more newsletters The UK government's top scientists are on high alert after a “pneumonia of unknown origin” was discovered in Argentina and has already killed two people. The unknown virus also infected another three people, who were already in a hospital in […]

NATO deploys more troops to eastern Europe We use your sign-up to provide content in ways you’ve consented to and to improve our understanding of you. This may include adverts from us and 3rd parties based on our understanding. You can unsubscribe at any time. More info The Ministry of Defence says that UK sea, land […]

We use your sign-up to provide content in ways you’ve consented to and to improve our understanding of you. This may include adverts from us and 3rd parties based on our understanding. You can unsubscribe at any time. More info Three members of the Palestinian militant group Islamic Jihad were killed in a shootout with […]

Specter of hunger rises in Brazil as coronavirus wrecks incomes