WARSAW (Reuters) – Several thousand people waving rainbow flags protested on Saturday in the centre of Warsaw to demand the release of an LGBT activist accused of hanging rainbow banners over statues and damaging an anti-abortion campaigner’s van. 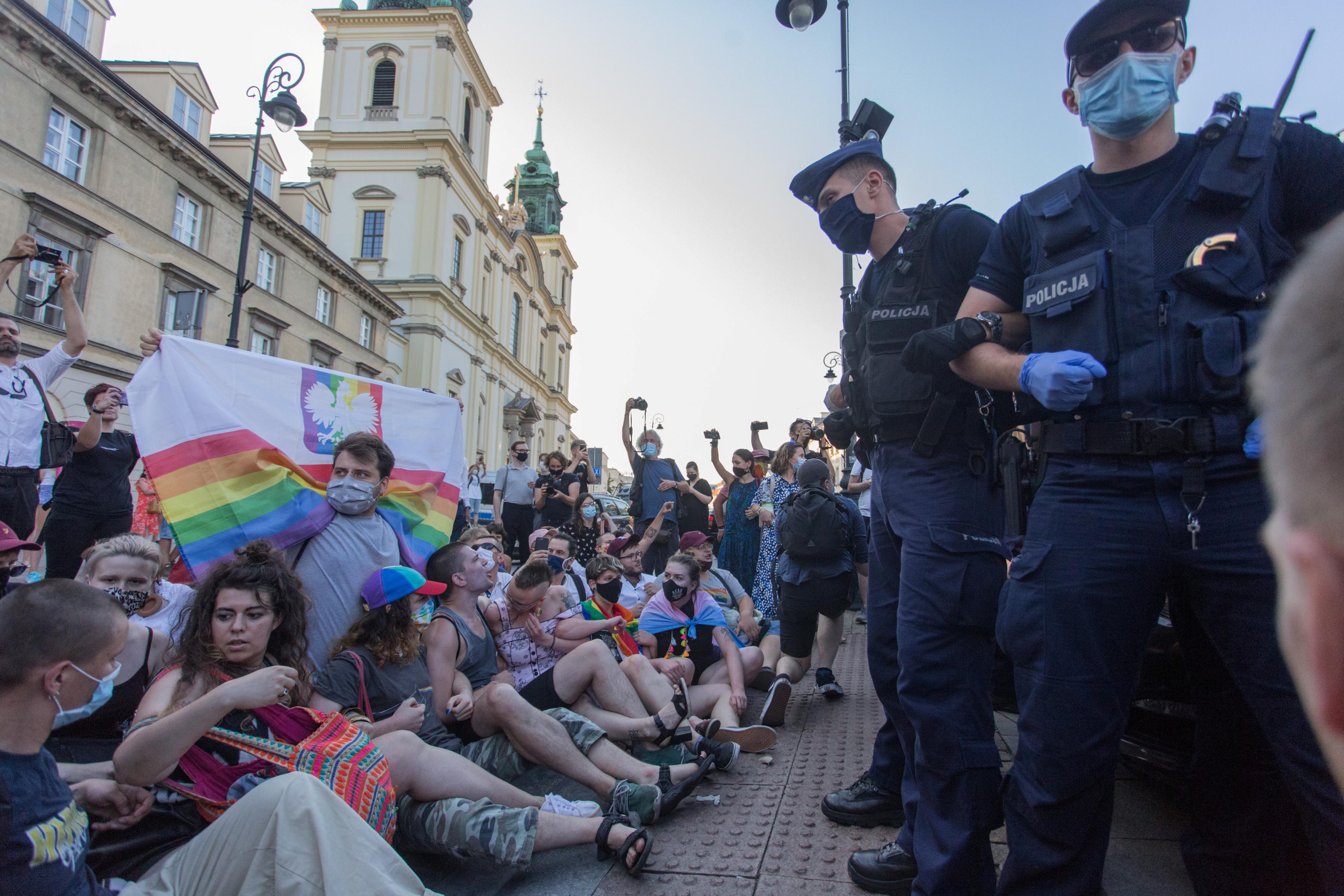 Crowds chanted “Give us Margot back!” and “Rainbow does not insult you!” outside Warsaw’s Palace of Culture.

The peaceful gathering applauded activists hanging another rainbow flag on a statue in front of the Palace, while police officers filmed the performance and the protest leaders.

On Friday the police detained 48 people, who were trying to stop the authorities from jailing Margot, the activist accused of hanging flags on statues of Jesus and others and destroying a the van of an anti-abortionist.

“We are here to protest against the fact that these people were detained by the police,” Mateusz Wojtowicz, 24, a payroll specialist, told Reuters.

The police started releasing detained protesters on Saturday, but not Margot.

She is a member of the activist group “Stop Bzdurom”. The group have said they hung flags on statues last week as part of a fight for LGBT rights, an issue thrust into the heart of public debate in Poland during last month’s presidential election.

The commissioner for human rights at the Council of Europe, a rights watchdog, called for the immediate release of the activist.

“Order to detain her for 2 months sends very chilling signal for freedom of speech and LGBT rights in Poland,” Commissioner Dunja Mijatovic tweeted.

The ruling nationalist Law and Justice (PiS) party says LGBT rights are part of what it calls an invasive foreign ideology that undermines Polish values and the traditional family.

(Reuters) – Goldman Sachs economists on Sunday predicted the U.S. Federal Reserve will cut interest rates aggressively perhaps before its next scheduled meeting in two weeks time, saying the head of the U.S. central bank sent a clear signal with his unscheduled statement on Friday. It also added its voice to the growing chorus of […]

Philips says U.S. deal will enable it to ramp up ventilator production

AMSTERDAM (Reuters) – Dutch health technology company Philips <PHG.AS> said on Wednesday it struck a deal with the White House that will enable it to significantly ramp up its production of hospital ventilators as promised. Philips said it would deliver the U.S. government 43,000 hospital ventilators, an essential tool for the treatment of patients struggling […]

By Susan Mathew (Reuters) – European shares dropped on Tuesday as a revenue warning from Apple hammered iPhone parts makers and underlined the impact of the coronavirus outbreak on global supply chains. However, the pan-European STOXX 600 index <.STOXX> ended off session lows helped by defensive buying as well as merger activity among Italian banks. […]