Throughout July weather conditions have been largely unsettled with impressive heatwaves mixed with wet and windy conditions.

As the month comes to an end, conditions will be extremely warm as a heatwave hits the UK.

Friday is forecast to be the hottest day of the year so far, beating the previous record set last month where temperatures hit 33.4C.

The highest temperature seen in July so far has been 28.5C. 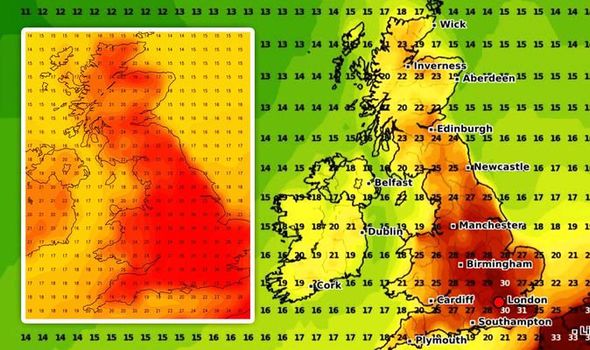 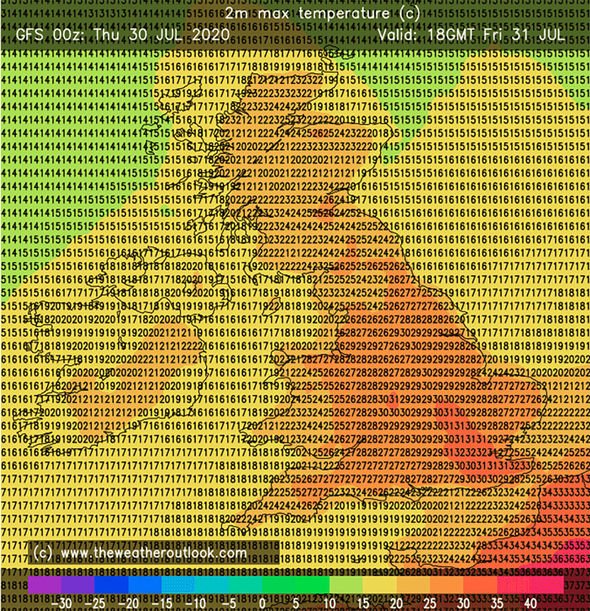 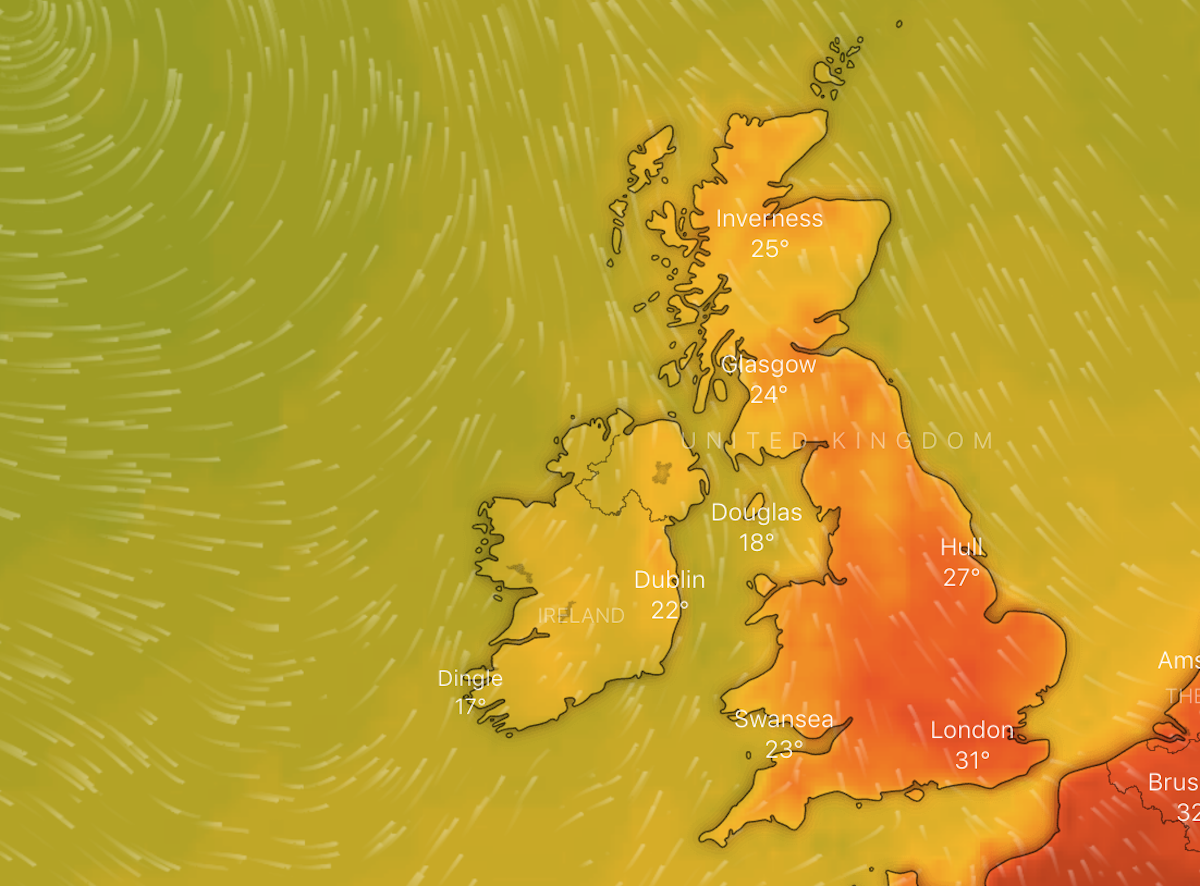 Thursday will see fine and dry conditions for many with much of the country basking in glorious sunshine and blue skies.

But Friday’s heat is likely to be scorching with temperatures potentially likely to topple the year’s record of 33.4C.

The spikes in temperature are a result of a separate area of low pressure out in the Atlantic which will force a warm front across the northern half of the UK bringing a band of rain that will move northeastwards through the day on Thursday.

The bulk of England and Wales will have a dry, warm and sunny day. 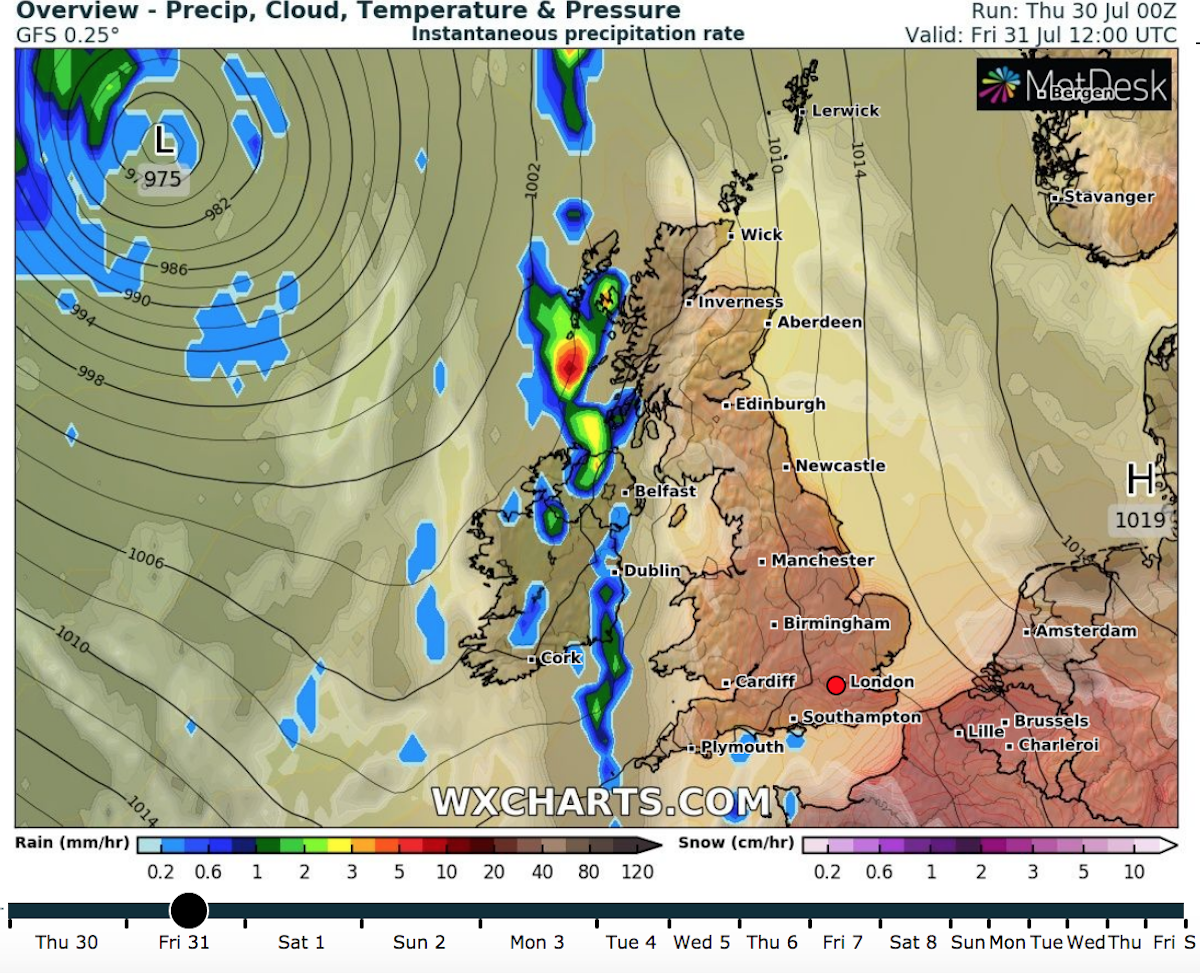 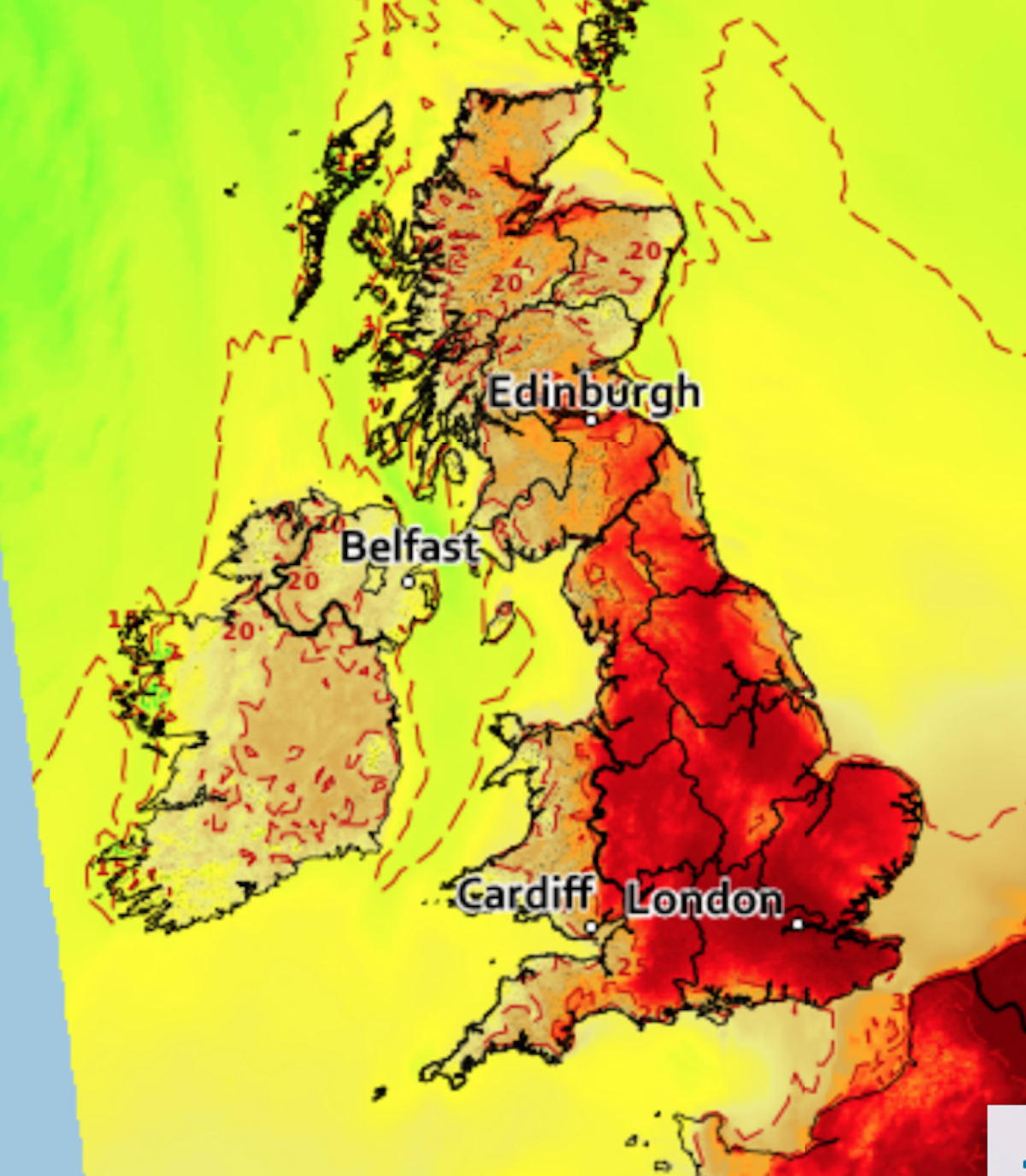 By Thursday night the low pressure will start to draw up warmer air from the south leading to a hot day on Friday, especially in the south.

Temperatures are likely to reach up to 33C in south east England according to the Met Office.

Elsewhere across the UK there will also be extremely warm conditions.

Locations in the Midlands and northern England are forecast to reach 30C whereas there will likely be temperatures in high 20s Celsius as far north as southern Scotland.

The heatwave on Friday is a result of southerly winds which will bring hot temperatures to most regions.

The warm temperatures will be a welcome relief for many Britons who may have returned early from holidays in Spain due to the new mandatory quarantine introduced last week.

But sadly for many the heatwave will be short lived, with a cooler and fresher air starting to arrive in the west through the south and east on Friday night.

The Met Office’s deputy chief forecaster Brent Walker said: “There is quite a change in the weather coming by the end of the week, with increasing sunshine and a day of hot conditions on Friday.

“It won’t persist long enough to become a heatwave as a cold front moves in on Saturday, bringing the temperatures back down to around average for the time of year.” 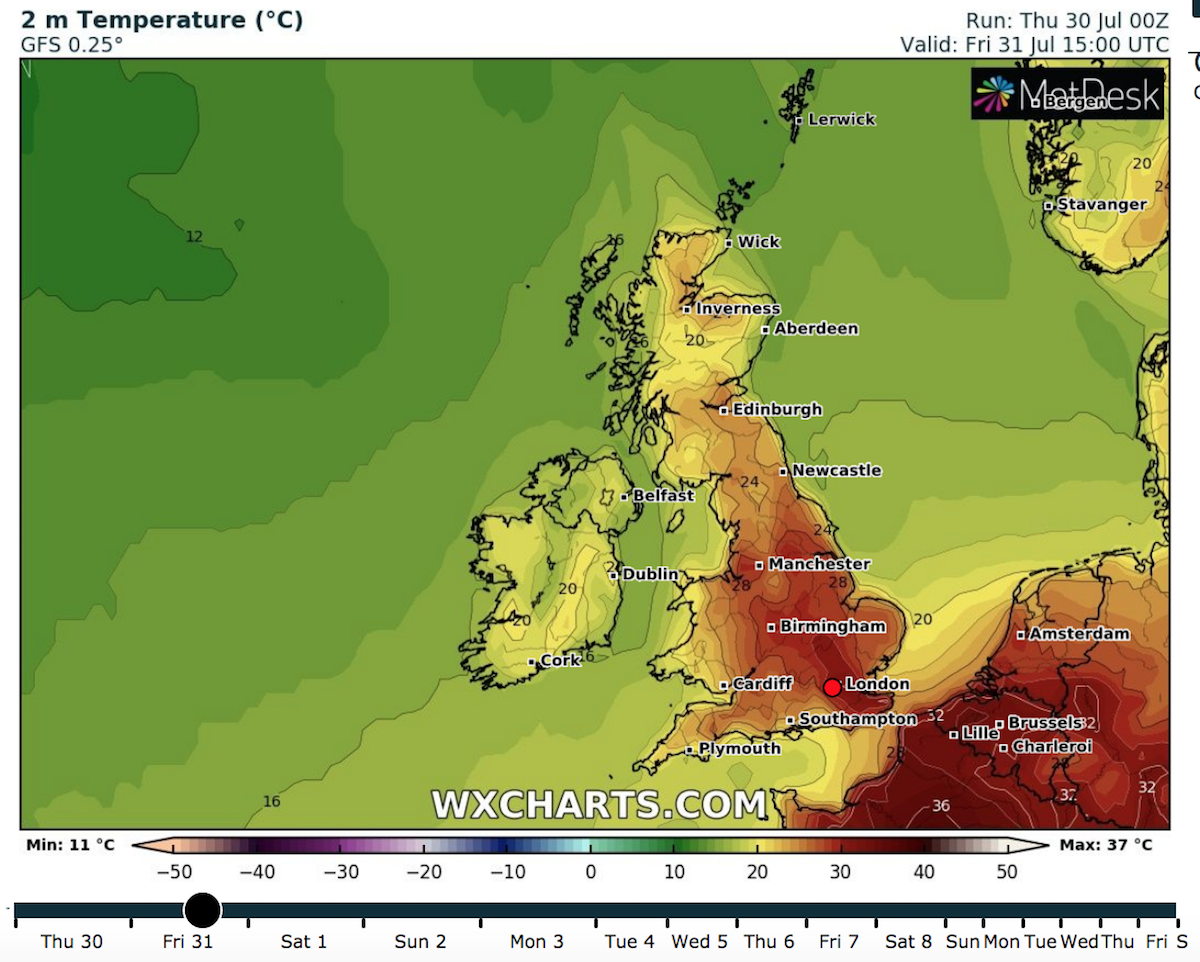 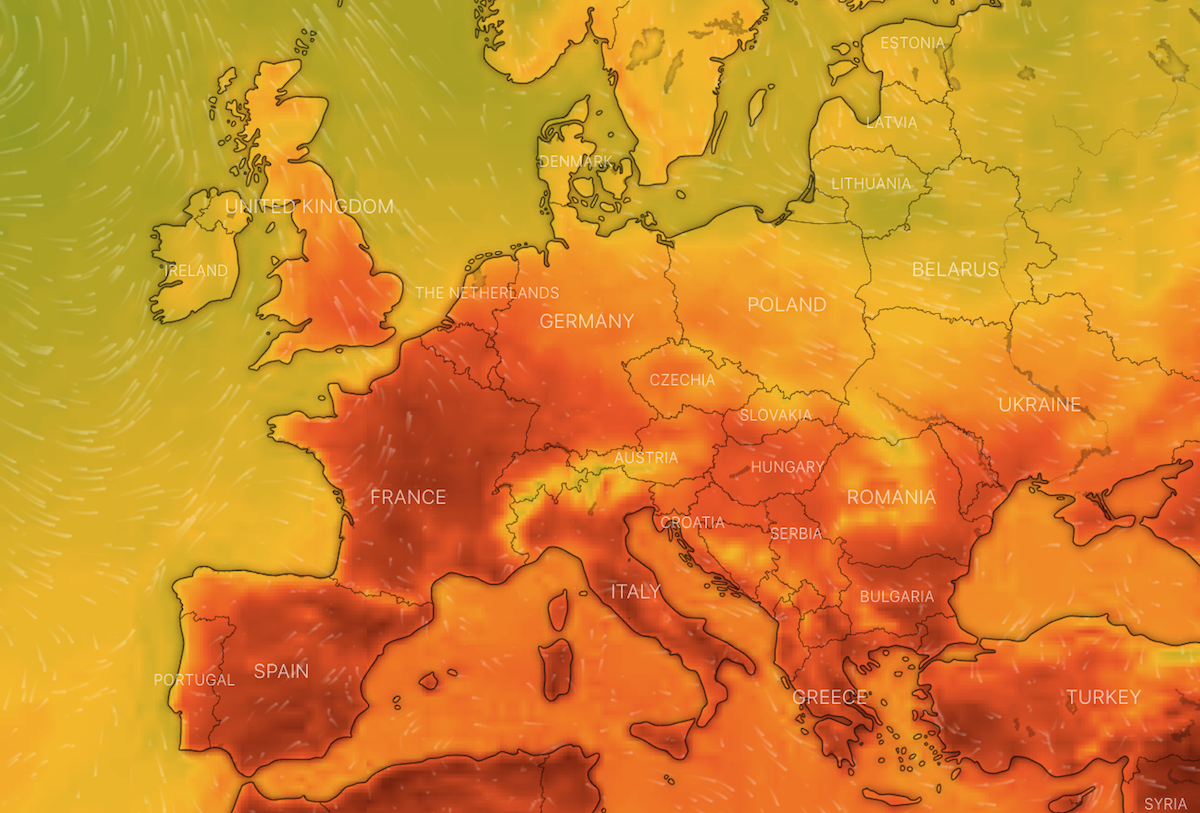 Saturday will see showers in the north and west, but many southern and eastern regions probably stay dry with sunny spells.

On Sunday there will be a mix of sunshine and showers with temperatures generally back to or even a little below normal.

More persistent rain could arrive in the south west later.

These conditions demonstrate a continuation of the unseasonably wet and windy weather seen throughout July.

The UK has already beaten its average monthly rainfall and seen wind gusts of 50mph.

Sunshine in July is also massively impacted, with the Met Office only thus far recording 113 hours of sunshine compared to the usual 172 hours.

This unsettled weather will continue into next week but the forecast detail is uncertain according to forecasters.

Monday could see cloud and rain spreading in from the Atlantic with the rain clearing eastwards on Tuesday.

Temperatures are expected to generally feel rather cool.

But by the middle of next week, Britons may see drier and warmer weather returning to the south.

LISBON (Reuters) – Volkswagen’s Autoeuropa car assembly plant near Lisbon has reduced its daily output by 16% because of a shortage of workers after Portugal ordered all schools closed amid the coronavirus outbreak, the plant said on Monday in a statement. ´ The plant, which produced 254,600 cars last year, will make 744 units per […]

By Guyon Espiner of RNZ Iran is threatening legal action against New Zealand after learning the Security Intelligence Service (SIS), in a joint operation with the CIA, broke into its Wellington embassy to plant bugs in the late 1980s and early 1990s. India has also hit back at an SIS operation that occurred during the […]