Philippine president signed bill into law on Friday after pushing it through Congress during the coronavirus lockdown. 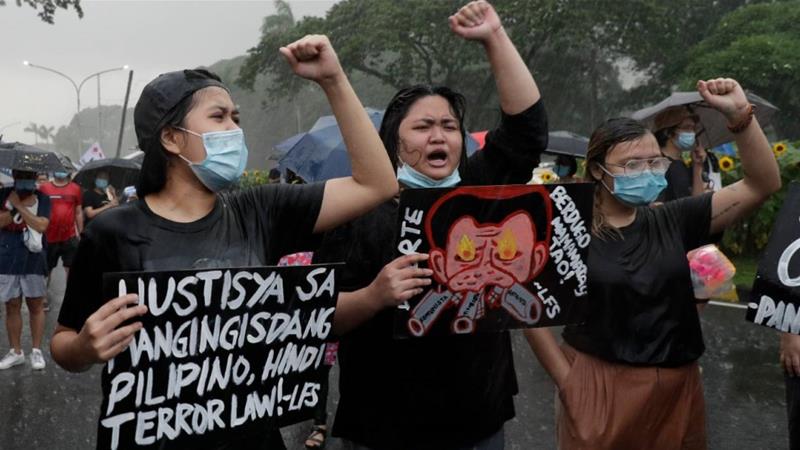 Philippine lawyer groups and a top congressman asked the Supreme Court on Monday to strike down the president’s controversial new anti-terrorism law, or parts of it, calling it unconstitutional for infringing on civil liberties.

Three petitions filed by opposition Congress member Edcel Lagman and two lawyer groups also sought a temporary restraining order against use of the law, which President Rodrigo Duterte signed on Friday after fast-tracking it through the legislature.

Local and international human rights groups said that while the Philippines does have clear security threats, the legislation could be abused to target administration opponents, with a presidentially appointed anti-terrorism council able to designate who is a suspected “terrorist”.

It grants security forces sweeping powers to go after targets, some without judicial approval, and allows for 90 days of surveillance and wiretaps as well as the arrest and detention of suspects without warrant or charge for up to 24 days.

“It was crafted in imprecise and vague language so much so that there is no certitude as to what acts the law actually proscribes,” Lagman said in his petition.

That, he said, leaves people “perplexed on what to avoid doing, even as its vagueness is conducive to conflicting interpretations and arbitrary enforcement”.

But Senator Panfilo Lacson defended the bill he co-authored, telling DZBB radio: “It is a good law, swift, effective and constitutional”.

Critics accuse Duterte of squashing debate and rushing the bill’s passage while the country is distracted by the coronavirus outbreak. He has said little publicly about it.

More court petitions were expected against what activists have condemned as a weapon to target his opponents, stifle free speech and intensify a climate of fear under Duterte.

The president’s spokesman, Harry Roque, said on Monday the Supreme Court’s decision would be respected.

Justice Secretary Menardo Guevarra said he also welcomed the filing of the petition, saying that the Supreme Court’s ruling can provide some guidance on how to formulate the implementing rules and regulations of the new law.

Meanwhile, the National Union of Peoples’ Lawyers (NUPL) accused Duterte of “blatant disregard” of the constitution, citing several provisions in the new law, which the group said is unconstitutional.

“No law should go above and beyond what is provided for in the Constitution,” the group said in a statement vowing that it “will not cower” in silence.

By Lucia Mutikani WASHINGTON (Reuters) – New orders for U.S.-made goods increased by the most in nearly 1-1/2 years in December, flattered by robust demand for defense aircraft, but persistently weak business spending on equipment pointed to limited scope for a sharp rebound in manufacturing. The report from the Commerce Department on Tuesday followed on […]

By Allison Lampert and Anna Mehler Paperny MONTREAL/TORONTO (Reuters) – A Canadian union is taking the unusual step of pursuing contempt of court charges against Canada’s second-largest railroad, in a previously unreported case that escalates the debate over working hours for railroad employees, according to two sources and legal documents. The Teamsters union argued in […]

‘Boris MUST be replaced by Brexiteer’, demand Tory MPs as contenders poised to launch bids