Former PM becomes first leader to be convicted of a crime in decision likely to have a major political impact. 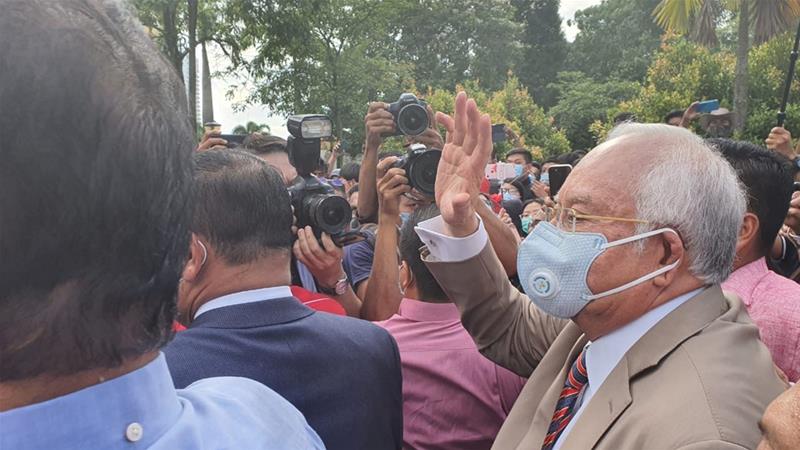 Kuala Lumpur, Malaysia – Former Malaysian Prime Minister Najib Razak has been found guilty of all seven charges of corruption in the first of five cases linked to the alleged theft of billions of dollars from state fund 1MDB, becoming the first Malaysian leader to be found guilty of graft.

Judge Mohd Nazlan Ghazali said the defence had failed to raise reasonable doubt over Najib’s role in diverting an estimated 42 million ringgit ($9.8m in current rate) from SRC International, a unit of 1MDB, into his personal bank accounts.

At one point during the reading of the verdict, Judge Mohd Nazlan said that 67-year-old Najib, who also held the post of finance minister, “acted outside the limits of the permissible conduct” in the approval of loans, which were later became a source of funds transferred to his account.

He said Najib “benefited” from the approval of the loan, and that the defence had failed to raise reasonable doubt over the offence of abuse of power – the first of the seven charges.

The former prime minister faces decades in jail, as well as hefty fines following his conviction. Although the charges also carry a sentence of whipping, Najib is likely to be spared the cane given his age.

The decision comes just six days after the High Court ordered Najib to pay the government as much as 1.69 billion ringgit ($400m) in unpaid taxes and penalties, covering the years from 2011 to 2017.

Ahead of the verdict on Tuesday, hundreds of Najib’s supporters gathered outside the court to show their backing for the embattled politician, who was once considered the country’s most powerful man.

As news of the convictions rippled through the crowd, they denounced the judge’s verdict as “political vengeance”. In court, as the judge said he wanted to proceed with sentecning, the defence team pushed for a delay until Monday.

The conviction was quickly trending across social media where many welcomed the judge’s decision.

Najib pleaded not guilty to the charges at the start of the trial in April. In December, he took the witness stand to defend himself – a first for a former leader of the country.

The former prime minister’s lead defence lawyer, Muhammad Shafee Abdullah, had argued that Najib was “not part of the conspiracy” to the defraud the government, laying the blame on party-loving fugitive Malaysian financier Jho Low.

On Monday night, Najib wrote on Facebook that he would appeal any guilty conviction. Appeals can go as high as the country’s top court.

So far, Najib has faced three separate trials in relation to 1MDB.

The second and biggest case covers several charges including 21 counts of money laundering involving $550m directly from 1MDB, while the third case, which started on November 18, relates to alleged abuse of power and cover up of an audit report at 1MDB. Two more trials are pending.

The scandal at 1MDB fuelled mass protests and led to the downfall of Najib’s government in May 2018.

Najib has remained free on bail despite the charges against him, criticising the policies of his former mentor, Mahathir Mohamad and the coalition that replaced him.

But Mahathir himself was forced to leave the job in March this year, after a group of disgruntled former members of his coalition backed by Najib’s party, UMNO, pledged their support to the current Prime Minister Muhyiddin Yassin.

Further flooding feared in western Germany with death toll above 80

SCHULD/ERFTSTADT, Germany (Reuters) – Further flooding was feared in western Germany on Friday as a breach at another dam loomed and the death toll rose to more than 80 in what is Germany’s worst mass loss of life in years.Slideshow ( 3 images )Entire communities lay in ruins after swollen rivers swept through towns and […]

A new sex robot has left fans struggling to believe it is not a real woman in a snap released by its creators. RealDoll, which describes itself on Instagram as the "Home of the world's finest luxury love dolls," shared a photo on Thursday of "Serenity" wearing only a black bra. Followers of the California […]

Off to the races: Key dates on the U.S. presidential election calendar

Why This Contentious Transition Is So Perilous for the Economy