BBC Weather forecaster Matt Taylor warned temperatures are 17C lower than this time last year, forecasting the colder July for the UK since 2011. In 2019, Britons saw the hottest day ever recorded in the UK with highs close to 39C. This year, Britons are yet to enjoy temperatures over the 30C mark but hot air is expected to reach our shores by the end of the month. Mr Taylor said: “Many have been commenting that summer seems to have gone a miss at the moment.

“This time last year we were approaching the hottest day ever recorder in the UK on July 25, a year ago tomorrow, we saw temperatures close to 39C.

“A complete contrast to what we’re going to see exactly one year later.

“Temperatures will struggle to get to 21C or 22C in Cambridgeshire with some heavy rain and possible thunderstorms.

“Why the big turnaround? It’s all down to where air is coming from, largely from the Atlantic.

“That means this year we’re still to have a 30C day in July.

“Pretty unusual as this is the warmest part of the year. That last happened in 2011. 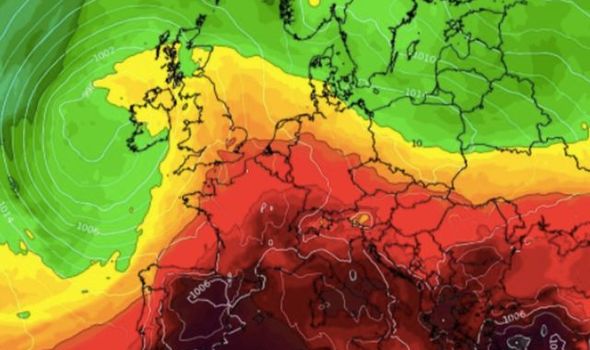 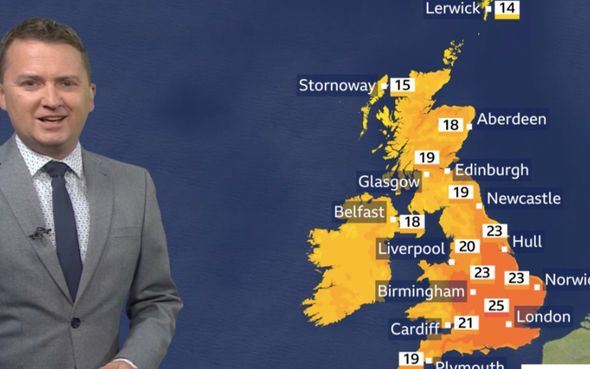 “But there will be some warmer air coming later next week.”

However, the latest long-range weather maps show scorching 34C (93F) highs to end July and get August off to a hot start.

Warmer weather has swept the UK this week, with temperatures climbing and a humid feel to the south of England. Later this week the UK could see 34C highs, with hot weather on the way this weekend according to forecasters.

Friday will feel warmer and mainly settled ahead of rain arriving from the west.

Netweather forecaster Paul Michaelwaite said of this week’s forecast: “The Azores high will ridge in from the southwest.

“So there’ll be plenty of fine, dry and warm weather.

“It’ll struggle to exert its influence to northern Britain at times though, with weather fronts bringing some rain in from the northwest on Tuesday and into midweek.

“Temperatures on Saturday will peak at 24 to 27C across southern and southeast England, including East Anglia.”

The end of July could also bring scorching highs for much of the UK, with weather maps turning dark red with heat towards July 28, 29 and 30.

WXCharts maps show highs of 27C across the south of England, while much of the north will see temperatures reach 24C.

However, Britons should make the most of the heat, as unseasonably wet and windy conditions are likely to return from the northwest. 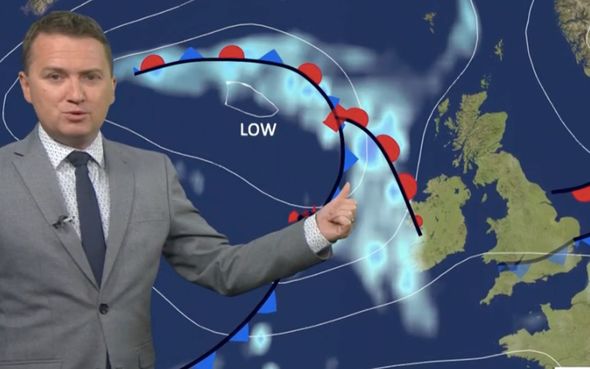 With the start of the summer holidays soon, August will bring torrential rain across the UK this year – much to the disappointment for thousands of Britons looking to holiday at home.

“The cool and showery theme is expected to continue well into August, with no sign of sustained heat. It’s not great for staycations.

“It’ll be downright cool into the week and not be far off freezing at dawn in some rural hollows.

“And the weather looks like deteriorating after midweek with almost autumnal charts as a strengthening jet stream propels wet and windy weather in our direction.”

By Naomi Tajitsu YOKOHAMA, Japan (Reuters) – Renault <RENA.PA> and Nissan <7201.T> can improve their alliance without altering their ownership structure, the chairman of the Franco-Japanese partnership said on Thursday, rolling back a previous push towards a full-blown merger that rankled Nissan. The comments from Jean-Dominique Senard point to an emphasis on more cooperation and […]

US President Donald Trump has said someone was shot near the White House, after abruptly leaving a news conference. Mr Trump told reporters the incident “seems very well under control”. He reappeared moments after a member of his security detail walked on stage during his remarks to reporters and escorted him out. Mr Trump was […]