The UK will this weekend be hotter than Mexico and people are making the most of the sunshine by flocking to the nation’s beaches and parks. According to a forecast by Netweather patchy showers on Saturday will lead into heavier rain throughout the night. The forecaster said: “The rain today will become patchier and lighter as the day wears on, although there could still be some heavier bursts around into the afternoon.

“Overnight, as it moves through the Midlands and East Anglia, and into southern England it’s likely to perk up for a time again with some thundery downpours likely.

“Then, into the start of Sunday, it’ll ease back again for a time, with a threat of some sharp downpours in the southeast during the afternoon.”

On Saturday temperatures were set to peak at 27C across the southern and southeastern regions of England.

This compares to the 18C in Mexico today. 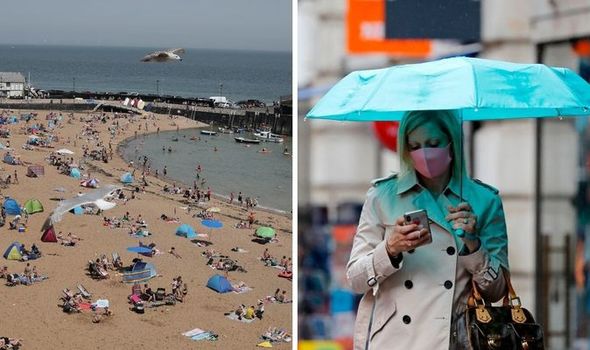 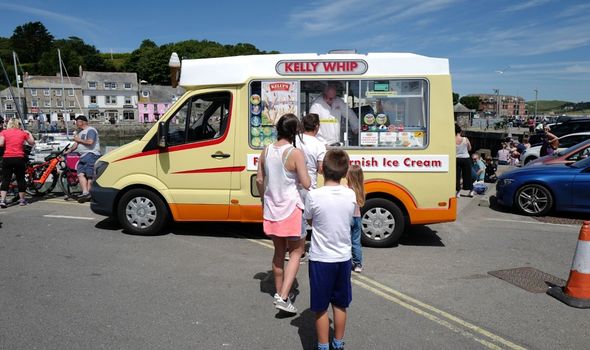 However, some parts of the North have seen a lot of rain compared to any patchy showers in the south.

Today marked the first official day of school summer holidays, four months after millions of parents started homeschooling their children due to the lockdown.

Sunday morning will bring clouds and outbreaks of rain in southern and southeast England.

Met Office weather: UK to be ‘hotter than Mexico’ as heatwave hits 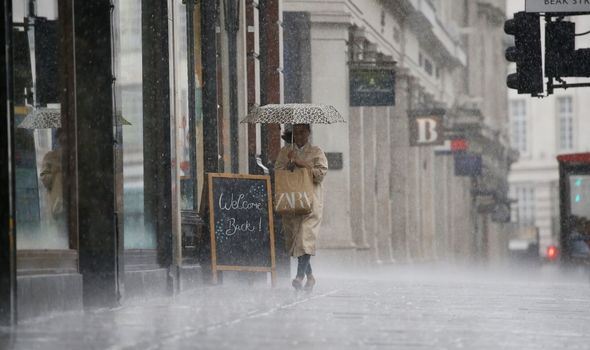 It will remain mostly dry with sunny spells elsewhere.

On Sunday evening, once any patchy rain clears the far south-east of England, it will be mostly dry and clear.

Next week will bring more sunny spells, with temperatures set to hover in the early to mid-20s for the entirety of the week. 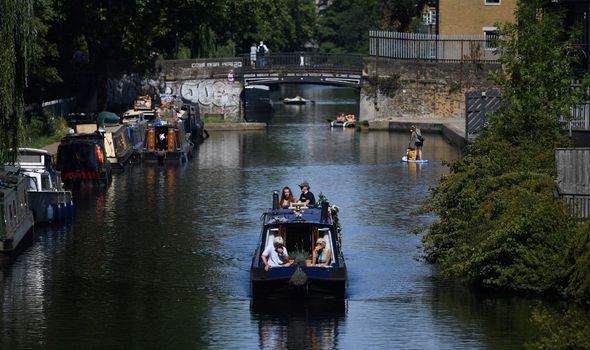 The BBC’s Louise Lear said Sunday morning in the London region would start off “cloudy, dull and drizzly”.

She added: “It does look as though Monday will be relatively quiet as high pressure is set to build and that is going to stay with us for the next few days.

“So, in terms of the high on Monday, plenty of sunshine coming through. Top temperature of 20C.”

According to predictions by the Met Office, “heavy bursts” of rain are expected tonight.

The Met Office said: “Cloud and outbreaks of rain over parts of England and Wales this evening sinking southeastwards with some heavy bursts of rain over southern UK during the early hours. 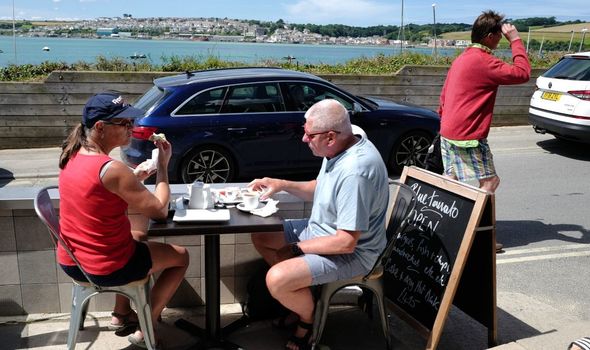 “Clear spells and a few showers further north where a chilly night.”

Meteorologists said from Monday to Wednesday Britons in the south would enjoy “fine, dry and increasingly warm” conditions.

They said parts of the north would see sunny spells and showers would “with organised rain arriving into the northwest later.”

By Jonathan Stempel (Reuters) – Warren Buffett on Friday said the coronavirus pandemic forced him to cancel Berkshire Hathaway Inc’s <BRKa.N> annual shareholder weekend, the largest gathering in corporate America, because the safety of participants and the wider community was paramount. The weekend, which Berkshire’s billionaire chairman calls “Woodstock for Capitalists” and normally attracts more […]

Boeing CEO does not want U.S. to take stake in company after coronavirus stimulus

By David Shepardson (Reuters) – Boeing Co <BA.N> Chief Executive Dave Calhoun said on Tuesday he does not want the U.S. Treasury to take an equity stake in the planemaker as a condition of government loans as credit markets freeze amid the coronavirus pandemic. “I don’t have a need for an equity stake,” Calhoun told […]

By Alden Bentley (Reuters) – U.S. stock index futures tumbled as trading reopened on Sunday night with investors still unnerved by the coronavirus and taking little solace from weekend comments by U.S. officials that aimed to soothe panic about a pandemic. Senior officials in President Donald Trump’s administration on Sunday tried to reduce concern about […]