India’s doctors and health workers are at great risk.

Almost 100 doctors have died due to COVID-19, and there is no data available for the scores of nurses and health workers who may have also succumbed to the disease.

A red alert has been issued by the India Medical Association – an organisation of physicians and medical students across the country – warning hospitals and doctors to adopt best scientific practices to ensure the safety of themselves, their families and colleagues.

“If COVID-19 mortality has to be lessened, it has to start with doctors and hospitals,” it said.

Dr Abhishek Bhayana is the youngest doctor to have died so far, at the age of 26.

He was working at one of the country’s top hospitals in Delhi, and on 28 June he complained of mild coronavirus symptoms while at home in the city of Rohtak.

An early COVID-19 test was negative, but all of the symptoms persisted and his condition worsened on 1 July.

He was taken to hospital, where he died the following afternoon.

Breaking down, his father Satish Bhayana told Sky News: “We just had no time, it all happened so fast. In less than a week he was gone.” 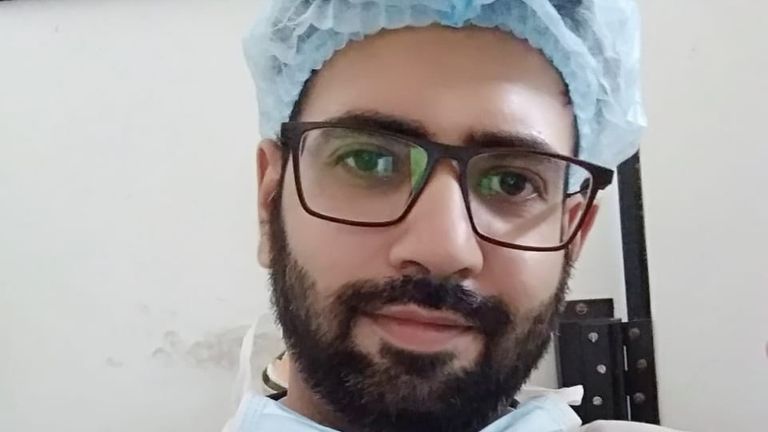 His older brother Aman said: “It is like a nightmare that we are in, I’m still not able to admit that he’s no more.

“He was just 26. We can’t bear this loss. Without any medical history or illness, the frontline COVID warriors and doctors like him die.”

Doctors and health workers are among the most vulnerable to COVID-19 in India, with reports of a lack of personal protective equipment (PPE), long shifts and of hospitals being ill-prepared for this health emergency.

Dr Bhayana’s mother Rekha said: “Parents will be scared to let their children become doctors and send them on the frontline from now on.

“Their lives are far more precious to us parents than them becoming doctors.” 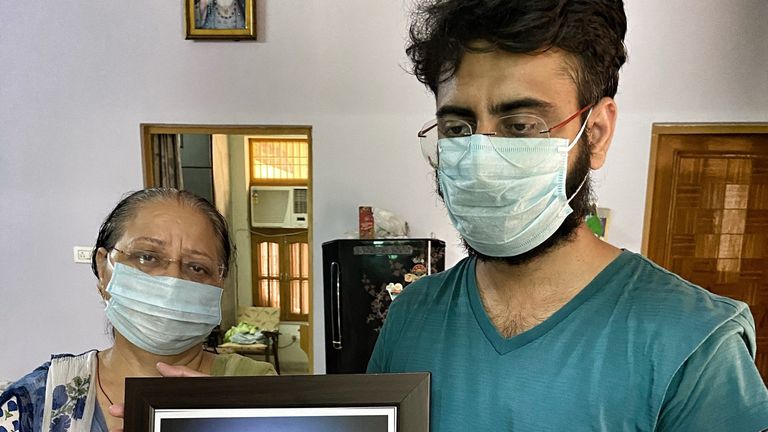 At one COVID-dedicated ambulance control room, Sanjay Yadav and his colleague Jaivendra Singh are on multiple phones constantly to answer more than 150 calls a day – a job they have been doing for four months.

They coordinate and track 38 ambulances in a district that caters to 4.5 million inhabitants of Ghaziabad, a town near the country’s capital Delhi.

In between his calls, Mr Yadav says: “In the beginning, I was afraid. But not anymore – I believe I am doing good work and so I will not get the disease.”

One call during our visit is to take a five-year-old girl to hospital – she has tested positive for COVID-19 and the stigma attached to the disease forces her and her mother to wait on the main road, away from their neighbourhood.

They are hurried into the ambulance and taken to a COVID hospital, and will be quarantined there for two weeks. 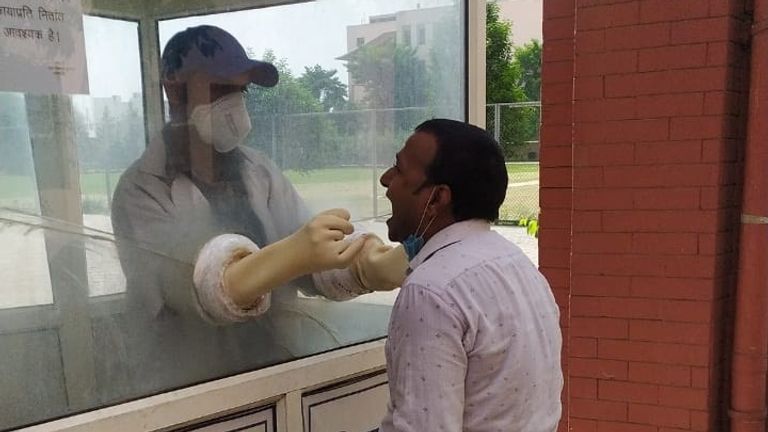 The girl is among more than one million cases now confirmed in India and there are growing concerns about the numbers coming from rural areas.

After months of severe lockdown for its population of 1.3 billion people, it is feared that some have been inadvertently carrying the virus back from urban areas and into villages.

For decades, successive governments have spent about 1.2% of India’s GDP on public health care, and so the infrastructure is inadequate and in many places almost non-existent.

This sort of pandemic could cause a near collapse of an already burdened system. At a testing camp in Ghaziabad, one man – 37-year-old Deepak – told Sky News he was “scared” to learn he had contracted the disease after overcoming a fever.

“Yes of course I am scared,” he said, adding: “I have a family and children, I never thought I will test positive.”

Out of 10 people tested during the time we were at this camp, three were confirmed positive – again adding to the increasing case count that makes India the third worst-affected country behind the US and Brazil.

With more than 35,000 cases reported in the last 24 hours, there are still no signs of it peaking.

SANTIAGO (Reuters) – Chile´s export-driven economy, once the envy of Latin America, will see a painfully slow recovery after being battered by the one-two punch of mass protests in late 2019 and the slow-moving coronavirus crisis, market watchers said. The Andean nation, among the region´s most dependent on mining and agricultural exports, saw the value […]

Bank of Italy says coronavirus may have significant impact on growth

Huge leopard enters girls’ hostel and gets trapped under the sofa

This is another News Portal > World News > Trump slams companies for using U.S. tax credit to buy back stocks