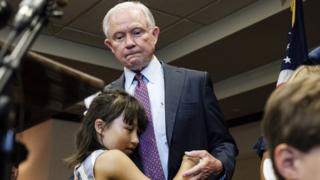 Former Attorney General Jeff Sessions has lost his bid to run for the Senate after a candidate backed by President Donald Trump defeated him in Alabama.

Mr Sessions was the first senator to back Mr Trump as president, but their relationship soured and he was forced out as attorney general in 2018.

Conceding defeat, he said he had no regrets over the decisions he had made.

He told his supporters he “did the right thing” in recusing himself from investigations into allegations of Russian interference in the 2016 election – a move his boss never forgave him for.

Primaries were also held in Maine and Texas on Tuesday.

Who is Trump’s candidate in Alabama?

Mr Trump tweeted his delight at Tuesday’s result, saying Tommy Tuberville had “WON big” and would make “a GREAT Senator”.

Mr Tuberville, 65, was a football coach at multiple US colleges for decades before retiring in 2016 as one of the top 50 most-winning coaches of all time.

An outspoken conservative and Trump supporter, he has made appearances on Fox News and was among those calling for Barack Obama to release his birth certificate when some questioned his qualification to run for president.

Mr Tuberville told his supporters that Mr Trump had called to congratulate him and added that he considered him to be “the best president in my lifetime”, Reuters reports.

During his campaign, he had frequently portrayed Mr Sessions as a weak candidate who had “quit on the president” and “failed Alabama”.

Endorsing him over Mr Sessions following the initial primary vote in March, President Trump described Mr Tuberville as “a REAL LEADER who will never let MAGA/KAG (Make America Great Again/Keep America Great), or our country, down!”

Ahead of the runoff, he had described Mr Sessions in a tweet as “a disaster who has let us all down. We don’t want him back in Washington!”

What’s the Trump-Sessions row about?

Jeff Sessions, 73, had represented the US Senate from Alabama for 20 years and was known for his conservative views, coming under fire from Democrats over his hard-line stance on immigration.

After he became the first US senator to endorse Mr Trump for president, Mr Sessions became the vice-chairman of the White House transition team and eventually gave up his long-time Senate seat to become Mr Trump’s first attorney general in 2017.

But he fell out of Mr Trump’s good graces a year later when he refused to oversee the investigation into alleged Russian meddling in the 2016 election. That inquiry, led by special counsel Robert Mueller, has repeatedly been deemed a “witch hunt” by the president.

Mr Sessions recused himself after Democrats accused him of failing to disclose contacts with the Russian ambassador during his attorney general confirmation hearing (which he later claimed he had forgotten about).

Since then, Mr Trump has not held back in his criticisms of his former ally, saying choosing Mr Sessions was the “biggest mistake” of his presidency.

Mr Sessions has criticised “juvenile insults” against him, but on Tuesday he urged his supporters to back Mr Tuberville and Mr Trump, saying: “We must not cede our nation to the mob or globalist forces. We have borders, laws and history that must be defended.”

He also said he felt good about leaving elective office with “my integrity intact”.

“I took the road less travelled, didn’t try to excuse myself or get in a fight or undermine the leader of our country, and the great work he has to do. That was an honourable path, I believe.”

La Palma volcano spews lava as it continues to erupt We use your sign-up to provide content in ways you’ve consented to and to improve our understanding of you. This may include adverts from us and 3rd parties based on our understanding. You can unsubscribe at any time. More info The arrival of ash from […]

Canada: Protesters attend Justin Trudeau rally in Bolton We use your sign-up to provide content in ways you’ve consented to and to improve our understanding of you. This may include adverts from us and 3rd parties based on our understanding. You can unsubscribe at any time. More info In April 2017, former UK Prime Minister […]

The head of the Russian space agency has warned that Western sanctions could make the International Space Station (ISS) crash. Director General of Roscosmos Dmitry Rogozin said the international measures designed to restrict Russia's economy would have consequences on a key section of the colossal orbiting structure. The ISS, which orbits 248 miles above Earth, […]

Exxon lops 30% off 2020 spending, deeper and later than rivals

“I never thought that I would have to go through this twice”: For Boulder police veterans, the death of Officer Eric Talley isn’t their first tragedy – The Denver Post

This is another News Portal > World News > “I never thought that I would have to go through this twice”: For Boulder police veterans, the death of Officer Eric Talley isn’t their first tragedy – The Denver Post