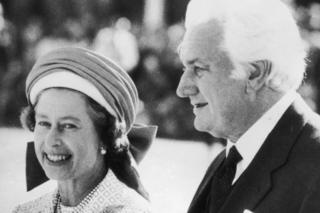 The Queen was not informed in advance about the 1975 dismissal of Australian Prime Minister Gough Whitlam, newly released letters show.

Mr Whitlam’s government was removed by her representative at the time, Governor-General Sir John Kerr, and replaced with an opposition party.

It is considered the most controversial event in Australian political history.

The letters, released after a court battle, show Sir John wrote it was “better for Her Majesty not to know”.

However, in earlier letters he had discussed with Buckingham Palace whether he had the constitutional authority to dismiss the prime minister.

Australia is a constitutional monarchy with the Queen as head of state, but many Australians previously had little idea her representative had such power.

Historians have since questioned what the palace knew about the removal of Mr Whitlam, a progressive whose reforms divided Australia after two decades of conservative rule.

More than 200 letters kept sealed in the National Archives were released on Tuesday for the first time.

In May, the High Court of Australia ruled they could be accessed in the national interest following a challenge by historian Prof Jenny Hocking.

What happened to Gough Whitlam?

Mr Whitlam and his Labor Party came to power in 1972, implementing policies which many celebrated, but he grew less popular amid a troubled economy.

On 11 November 1975, he was sacked on the justification that he had failed to get parliament to approve spending and then subsequently declined to call an election.

The governor-general argued he had the authority to do this under implied powers in the constitution.

But this “reserve power” to remove an elected prime minister who held a majority in the House of Representatives has been debated ever since by legal experts.

His dismissal was an unprecedented action which shocked the country and prompted questions about Australia’s political independence from Britain.

Some viewed it as a “constitutional coup” and an overreach of the “royal prerogative”, speaking demonstrations and calls to become a republic.

Why is releasing the letters important?

Historians say they finally fill in the gaps about one of Australia’s most crucial events.

“They go to the very heart of Australia’s constitutional independence,” said Prof Mark McKenna from the University of Sydney.

Mr Whitlam and his supporters consistently claimed he was the victim of a conspiracy between Sir John and Mr Fraser to remove him from office. However, there were no formal accusations of interference directed at Buckingham Palace.

The public was denied access to the letters because they were deemed “personal” correspondence with the Queen, and subject to a royal embargo.

Prof Hocking launched a court case in 2016 to overturn that status, arguing the letters were critical historical records. She said their access should not be restricted by the rules of a foreign power.

The release of the letters was “a terrific outcome for transparency and history”, she told the BBC.

There are many intriguing aspects about the “Palace Letters”. The secrecy. The years of one historian’s quest for the letters to be made public. The fact that it took a High Court decision for them to be released after a Federal Court had refused the request.

All of this added to suspicion around what the palace knew. The release of these letters today answers the most pressing question about the monarch’s involvement in the sacking of the prime minister. We now know that she wasn’t and that her representative made the decision.

While there is no bombshell revelation, it’s a remarkable insight into an almost daily and detailed correspondence between Sir John, the Queen and her secretary during a time of high tension in Australian politics – not just between Mr Whitlam and Mr Fraser, but also between Mr Whitlam and the governor-general himself.

It’s also a glimpse into almost a tug of war of power. The letters remind us that as the Queen’s representative was considering his position and powers to dissolve parliament and dismiss Mr Whitlam, the prime minister himself was considering going to the Queen to call for the governor-general’s removal.

The decision was made without informing the palace to avoid putting the Queen in “an impossible position”, one of Sir John’s letters read.

When Gough Whitlam was sacked there was a great deal of anger at what many people saw as the palace representative flexing his powers over Australia’s politics. There were calls for the country to be a republic at the time. It’s unclear whether the newly released documents will revive those sentiments.

By John Miller ZURICH (Reuters) – Rolex, Patek Philippe and Chanel will not exhibit at MCH Group’s <MCHN.S> Baselworld watch and jewellery trade show in 2021, they said on Tuesday, another blow to the flagging event that has already seen high-profile exits including Swatch Group <UHR.S>. The luxury timepiece companies, along with Chopard and Tudor, […]

By Carolyn Cohn LONDON (Reuters) – Having initially brushed off the potential impact from coronavirus-linked claims, global insurers are waking up to the prospect of a double whammy – a sharp rise in payouts at a time of big investment losses. Because epidemics are excluded from many business insurance policies, the early prognosis was for […]

By David Shepardson (Reuters) – Boeing Co <BA.N> has secured financing commitments for more than $12 billion from over a dozen banks, a source familiar with the matter said on Monday, as financial pressures mount due to a production halt on its 737 MAX aircraft. The financing deal was not closed and not yet finalized, […]

Bombardier in talks to sell business-jet unit to Textron: WSJ

Japan warns about risks to economy from China virus outbreak