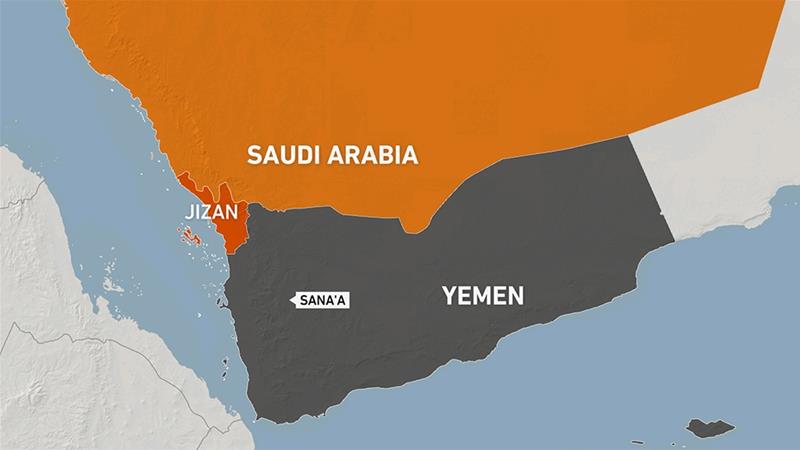 Yemen’s Houthi rebels say they have attacked a large oil facility in an industrial complex south of the Saudi Arabian city of Jizan as part of an overnight operation.

The Saudi-led military coalition fighting the Houthis said on Monday it intercepted and destroyed four missiles and six bomb-laden drones launched by Houthi rebels towards the kingdom.

The missiles and drones were launched from Yemen’s capital Sanaa and directed at civilian targets, coalition spokesman Turki al-Malki said in a statement carried by the official Saudi Press Agency.

The Houthis’ military spokesman, Yahya Sarea, confirmed in a statement that the rebel group had launched attacks on Saudi military sites.

He said the group’s ballistic missiles and drones had destroyed a number of military bases and installations of the Saudi coalition in Jizan, Najran and Assir near the border with Yemen, in a “wide-scale military operation”.

“Additionally, the giant oil facility in the Jizan industrial zone. The strike was accurate,” he said, adding that they also hit Saudi warplanes and other military targets in the airports of Abha, Jizan and Najran in southwest Saudi Arabia near the Yemen border.

Oil company Saudi Aramco operates a 400,000-barrel-a-day refinery in the Red Sea city of Jizan, which lies around 60 km (40 miles) from the Yemen border.

Aramco did not immediately reply to a request for comment.

Cross-border attacks by the Houthi rebels have escalated since late May when a truce prompted by the novel coronavirus expired. In late June, missiles reached the Saudi capital, Riyadh.

Sarea said details of a broad military operation inside Saudi Arabia carried out by Houthi forces would be announced later.

Saudi Arabia has been leading an alliance to fight the Houthis in Yemen since March 2015.

The Saudi-UAE coalition intervened after the Houthis removed Saudi-backed, internationally recognised government of President Abd-Rabbu Mansour Hadi from the capital, Sanaa, in late 2014.

The United Nations recently launched virtual talks among the warring parties on a permanent ceasefire and confidence-building steps to restart peace negotiations.

But discussions have been complicated by the surge in violence since the ceasefire expired.

The war has killed more than 100,000 people and caused what the UN describes as the world’s largest humanitarian crisis.

The conflict has pushed Yemen, already one of the Arab world’s poorest countries, to the verge of famine and devastated the country’s health facilities.

Gunfire heard at Mali army base as soldiers mutiny outside capital

Justin Trudeau says he doesn’t want a federal election this fall, but he is daring his opponents to force one with next week’s critical throne speech. The Sept. 23 outline of the Trudeau government’s agenda will not be your typically boring “throne drone.” Instead, Trudeau has signalled the speech will map a bold, once-in-a-generation plan […]

By Karen Brettell NEW YORK (Reuters) – The dollar posted its biggest weekly decline in more than a decade on Friday, as trillions of dollars worth of stimulus efforts by governments and central banks helped temper a rout in global markets driven by the coronavirus pandemic. The dollar surged in March as tumbling stock and […]

French economy to contract 8% this year as lockdown extended: minister