Hundreds of thousands of Hongkongers cast ballots in primaries held by the city’s pro-democracy parties in defiance of the new security law.

More than 600,000 people out of the 7.5 million-strong population battled temperatures of 33C and a spike in COVID-19 cases to vote in the unofficial two-day primary ahead of upcoming elections, organisers said.

Held two weeks after Beijing imposed a controversial national security law on the semi-autonomous territory, voters defied warnings the primaries could be in breach of the new legislation as it outlaws interference and disruption of duties by the local government. Organisers dismissed the comments by Hong Kong’s constitutional affairs minister, Eric Tsang, saying they just want to hold the government to account by gaining a majority in the legislature.

The high turnout – a third of voters who backed the democrats last year – will “send a very strong signal to the international community that we Hongkongers never give up”, aspiring democrat Sunny Cheung, 24, said.

“Even under the shadow of the national security law, there were still 600,000 people coming out,” said one of the organisers, Au Nok Hin.

“You can see the courage of the Hong Kong people in this. Hongkongers have created another miracle.”

The new law prohibits what Beijing views as secessionist, subversive or terrorist activities, as well as foreign intervention in Hong Kong affairs.

Passed within a month of being introduced by Beijing, the law gives police sweeping powers to conduct searches without warrants and order internet service providers and platforms to remove messages deemed to be in violation of the legislation. On Friday, police raided the office of the Public Opinion Research Institute, a co-organiser of the primary elections.

Police said the computer system was suspected of being hacked, causing a data leak, and detectives are continuing to investigate.

Multiple pro-democracy parties were part of the primaries as they attempt to join forces to use the weekend’s vote as a guide to field the best candidates in the official legislative election in September. 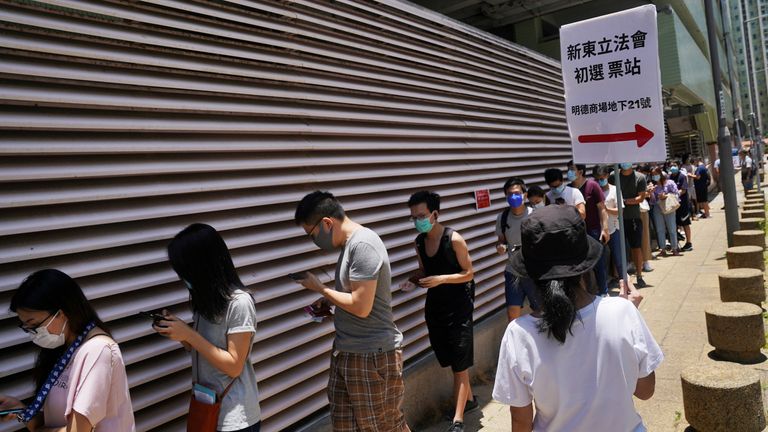 In a democratic fight back against the new law being imposed on Hong Kong, the parties want to win a majority in the legislature, which is typically skewed towards the pro-Beijing camp.

Pro-democracy activists had to raise money through crowdfunding to hold the primaries – and pledged to veto the government’s budget if they clinch a majority in September.

If an important bill, such as the budget, is vetoed twice then the city’s chief executive, Carrie Lam, must resign, according to the Basic Law which Hong Kong is governed by.

By Joshua Franklin NEW YORK (Reuters) – Corporate America is gearing up for leaner times. From Exxon Mobil Corp <XOM.N> to Royal Caribbean Cruises Ltd <RCL.N>, companies rushed to borrow more money and boost their cash coffers on Tuesday, as the market turmoil fueled by a plunge in oil prices and the global coronavirus outbreak […]

U.S. candidate Bloomberg spent $200 million of own wealth on presidential bid in 2019

(Reuters) – Former New York City Mayor Michael Bloomberg contributed more than $200 million of his own money to his bid for the Democratic presidential nomination as of the end of 2019, according to disclosures his campaign filed on Friday with the Federal Election Commission. Of that, Bloomberg’s campaign spent $188 million, according to the […]

JAKARTA (Reuters) – Indonesia is expected to post a narrower trade surplus in March, with exports and imports seen contracting as the coronavirus pandemic choked global trade, a Reuters poll showed on Tuesday. The median forecast of 14 analysts in the poll was for Southeast Asia’s largest economy to post a $760 million trade surplus […]

Bloomberg qualifies for next debate after poll boost

Dow closes above 29,000 after China and U.S. sign trade truce

European new car sales plunge by 51.8% in March due to coronavirus: ACEA

This is another News Portal > World News > Exclusive: American Airlines in talks to hire Millstein for aid advice