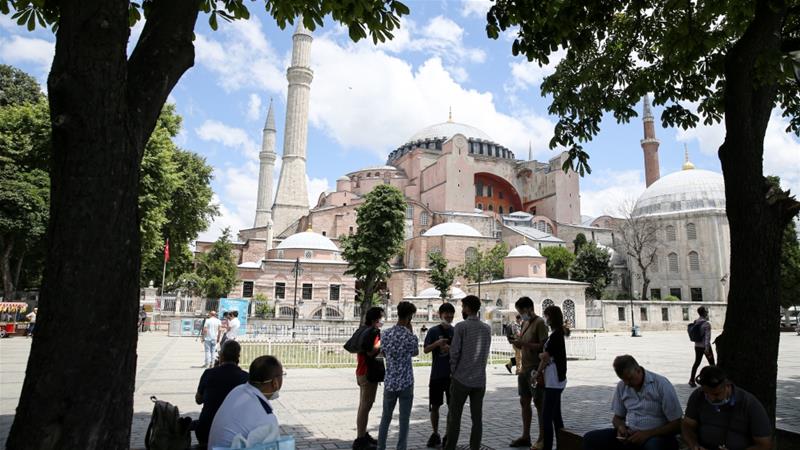 Turkey’s president Recep Tayyip Erdogan has declared Istanbul’s Hagia Sophia open to Muslim worship after a top court ruled that the building’s conversion to a museum by modern Turkey’s founding statesman was illegal.

Erdogan made the announcement on Friday an hour after the court ruling was revealed, despite international warnings not to change the status of the nearly 1,500-year-old monument, revered by Christians and Muslims alike.

“The decision was taken to hand over the management of the Ayasofya Mosque … to the Religious Affairs Directorate and open it for worship,” the decision signed by Erdogan said.

Erdogan had previously proposed restoring the mosque status of the UNESCO World Heritage Site, a focal point of both the Christian Byzantine and Muslim Ottoman empires and now one of the most visited monuments in Turkey.

Earlier, a top Turkish court revoked the Byzantine-era Hagia Sophia’s status as a museum. The Council of State, which was debating a case brought by a Turkish religious organisation, cancelled a 1934 cabinet decision that defined the sixth-century building as a museum.

“It was concluded that the settlement deed allocated it as a mosque and its use outside this character is not possible legally,” Turkey’s top administrative court said in the ruling.

“The cabinet decision in 1934 that ended its use as a mosque and defined it as a museum did not comply with laws,” it said.

Erdogan shared on his Twitter feed a copy of the decree he had signed which said the decision had been taken to hand control of the Ayasofya Mosque, as it is known in Turkish, to the country’s religious directorate and reopen it for worship.

(Reuters) – U.S. consumer electronics retailer Best Buy Co <BBY.N> said on Friday that its board was conducting an independent review on allegations of misconduct against Chief Executive Officer Corie Barry after receiving an anonymous letter. The company declined to reveal the contents of the letter. In an email statement to Reuters, its spokesperson said, […]

LONDON (Reuters) – Lloyds Banking Group <LLOY.L> has offered additional payments of 35,000 pounds each to 191 victims of one of Britain’s biggest banking scandals, after a review of its handling of a compensation scheme found “serious shortcomings”. Britain’s biggest mortgage lender has struggled to contain the fallout from a fraud at Halifax Bank of […]

By Toby Sterling AMSTERDAM (Reuters) – Online food ordering company Takeaway.com has won the battle for Britain’s Just Eat with a 6.2 billion pound ($8 billion) share offer that will create one of the world’s largest meal delivery companies. Takeaway said that 80.4% of Just Eat shareholders had agreed to its all-share offer, passing a […]

EU consumers may be able to bring dieselgate claims in home court: adviser