SEOUL (Reuters) – U.S. Deputy Secretary of State Stephen Biegun on Wednesday rejected reports that he was seeking to meet North Korean officials during a visit to South Korea this week but reiterated that Washington is open to resuming talks. 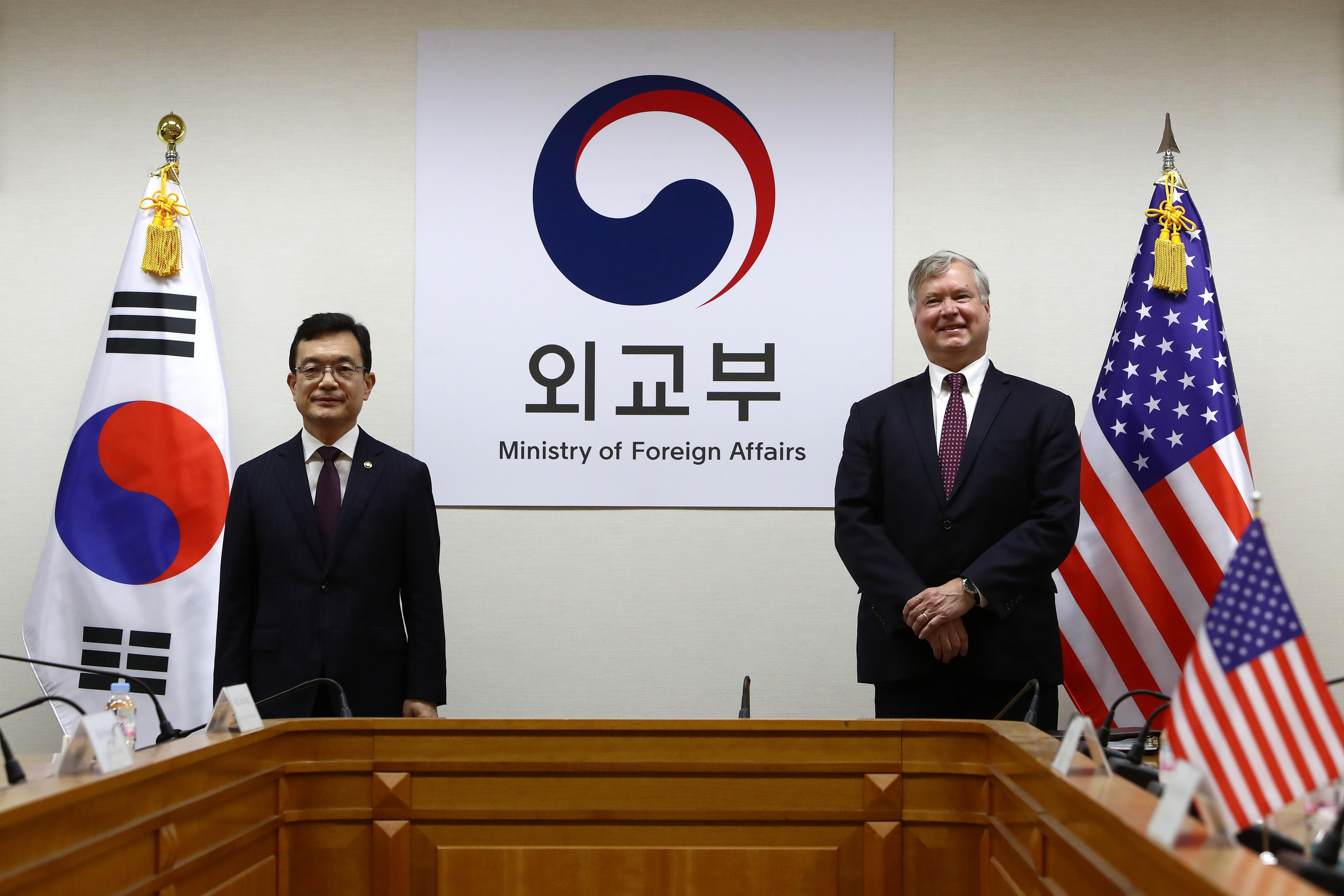 The U.S. point man for North Korea, Biegun was in Seoul for meetings with South Korean officials, overshadowed by North Korea’s insistence that it has no intention of returning to denuclearisation negotiations as long as the United States clings to “hostile policies”.

Talks covered a range of issues, including responses to the novel coronavirus and negotiations over the sharing of the costs of the U.S. military deployment in South Korea, but North Korea dominated the agenda, South Korean officials said.

Biegun’s visit had sparked speculation about a last-ditch effort to revive the North Korea talks ahead of the U.S. presidential election in November, but he played down expectations for new meetings.

“Let me absolutely be clear, we did not request a visit,” Biegun said after meeting Lee. “This visit this week is to meet with our close friends and allies, the South Koreans.”

But Biegun said he was ready to resume talks at any time the North Koreans designate.

“We look forward to continuing our work for a peaceful outcome of the Korean peninsula, I believe this is very much possible,” he said, noting that U.S. President Donald Trump had given his full support.

Biegun reiterated that the United States was willing to be flexible and reach a “balanced agreement” with North Korea, should it decide to return to talks, Lee said.

Talks with North Korea have since stalled, and its officials say they have no intention of sitting down with the United States.

Biegun said he does not focus on such statements, but instead was guided by the “vision” outlined by Trump and Kim at their meetings.

The two met for the first time in 2018 in Singapore, raising hopes for a negotiated end to North Korea’s nuclear programme. But their second summit, in 2019 in Vietnam, and subsequent working-level negotiations fell apart.

Trump said on Tuesday he was open to another meeting with Kim and thought it might be helpful, Voice of America reported, citing a transcript of an interview Trump gave to Gray Television, due to be aired on Sunday.

Kim has been maintaining a low profile in recent months, making far fewer public appearances than usual, according to analysts who monitor his movements.

On Wednesday, North Korean state media reported Kim had marked the anniversary of the death of his grandfather, North Korea’s founding leader Kim Il Sung, by visiting his mausoleum at Pyongyang’s Kumsusan Palace of the Sun.

Biegun has previously played down the likelihood of another summit between Trump and Kim, saying the coronavirus made that unlikely before the election.

North Korea’s strident rejection of new talks means Biegun’s visit is more likely to focus on coordination between the two allies, rather than seizing some opening for diplomacy, said John Delury, a North Korea expert at Yonsei University in Seoul.

“I don’t see signals from North Korea that they are looking for engagement,” he said.

“The allies should get on the same page about upcoming defence drills, how their working group can support inter-Korean projects while enforcing existing sanctions, and how to jointly respond if Pyongyang escalates or tests more weapons,” she said.

WASHINGTON (Reuters) – U.S. President Donald Trump laid out guidelines on Thursday for reopening the coronavirus-ravaged U.S. economy, saying states should take a phased approach to let Americans return to work as conditions allow. Trump told a White House news conference that governors will be empowered to tailor the approach to their own states and […]

(Reuters) – Chemical giant Saudi Basic Industries Corporation (SABIC) <2010.SE> said on Tuesday that it had raised its stake in Swiss chemicals maker Clariant <CLN.S> to 31.5% from 25%. SABIC, which is Clariant’s largest shareholder, said the increase was part of its strategy to achieve a leadership position in the Specialties business. The company’s decision […]

By Susan Mathew and Sagarika Jaisinghani (Reuters) – German shares jumped 5.8% on Monday to lead a strong bounce in European shares as a slowdown in coronavirus deaths raised hopes that nationwide lockdowns may gradually be eased. While all major sectors were well in the black, the travel and leisure sector <.SXTP> — worst hit […]

Meghan and Harry ‘must think about future’ after ‘bad PR’, expert claims