While much of the UK has seen some cloud and drizzle today (Wednesday, July 8), the Met Office predict some warmer temperatures could be making an appearance this weekend. However, before the weekend a stretch of the UK is forecast to witness some thunderstorms.

Met Office forecaster Becky Mitchell told Express.co.uk: “Today it’s been very cloudy across much of England and Wales with drizzly rain, and a bit drier across Scotland and Northern Ireland.

“And tomorrow (Thursday) is looking very similar, so grey and cloudy for most of England and Wales on Thursday, with outbreaks of drizzle.

“And then we’ve got scattered showers and sunny spells across Scotland and Northern Ireland.”

Top temperatures on Thursday are expected to be around 20C in the south, and Thursday is forecast to still be quite a humid day in England. 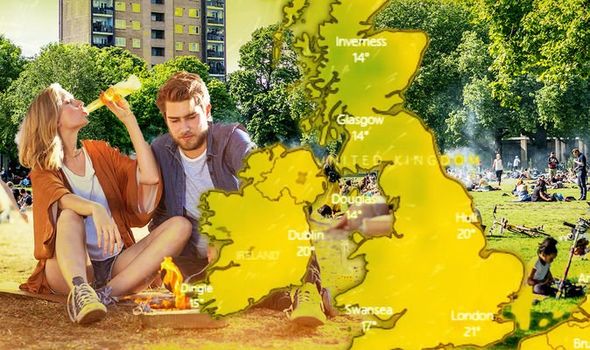 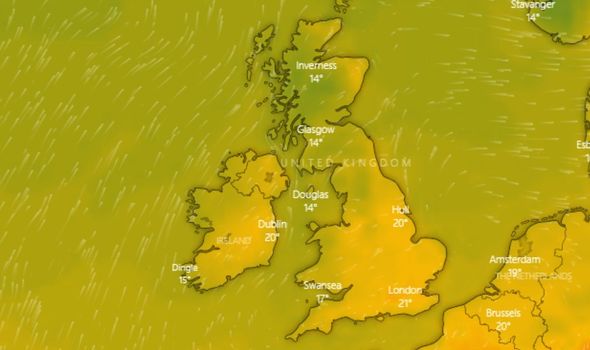 Ms Mitchell added: “Looking ahead to Friday, we lose the low cloud so much brighter for most places, but there will be some heavy, possibly thundery, showers in eastern parts, and elsewhere some dry, sunny spells.”

Stretches of eastern Scotland and eastern England could see some thunder on Friday, but Ms Mitchell added they will be “quite hit and miss” so not everywhere will see thunder.

Currently the Met Office has not issued any weather warnings for thunder on Friday either.

Ms Mitchell said this weekend will be “bright and sunny for most”. 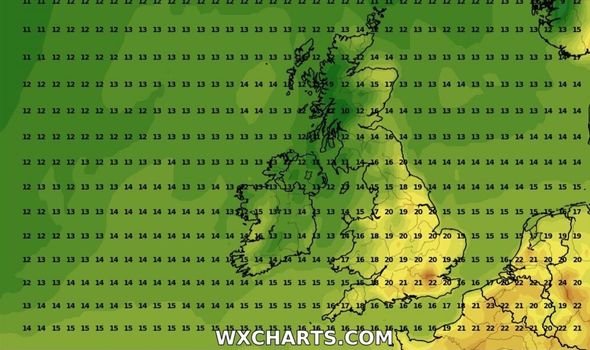 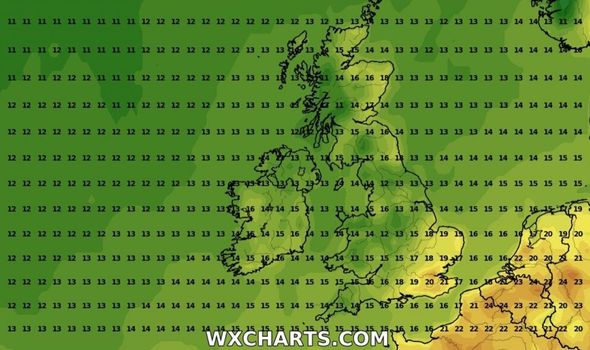 She added: “At the weekend many places staying dry with sunshine, so looking quite bright and sunny for the weekend for most.

“Apart from on Sunday when we could see some rain across Northern Ireland and western Scotland, but elsewhere dry, warm and sunny.”

Temperature wise, on Saturday and Sunday the forecast predicts temperatures in the low to mid-20’s.

However by Sunday we could see highs of 24C in the south-east, considerably warmer than current temperatures.

WXCHARTS maps, which use data from MetDesk, suggest the temperature could drop after the weekend.

WXCHARTS maps show on Sunday much of southern and eastern England will see temperatures above 20C.

Elsewhere Scotland and Northern Ireland will see maximum temperatures into the teen’s. 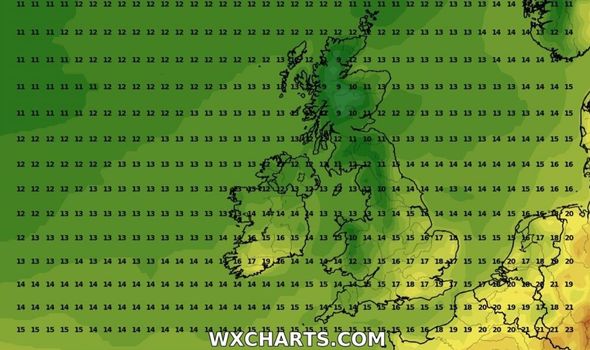 On Monday some parts of the south-east are forecast to see maximum temperatures of 20C.

However elsewhere the temperatures are predicted to be significantly lower than the forecast for Sunday.

Elsewhere in England will see maximum temperatures around the high teen’s, while further north temperatures will be a bit lower.

On Tuesday across the UK maximum temperatures remain below 20C, according to one chart.

By Swati Pandey SYDNEY (Reuters) – Australia’s central bank will likely hold its cash rate at a record low of 0.75% next week but cut at least once more later this year, a Reuters poll showed, amid signs the country’s economy was still stuck in a slow lane. A majority of the 32 respondents expect […]

By David Shepardson WASHINGTON (Reuters) – U.S. national railroad Amtrak, which received $1 billion in emergency funding this month from Congress, said on Thursday it expects to lose at least $700 million in operating earnings in this budget year due to the effects of the coronavirus. An Amtrak spokeswoman said that ridership has dropped by […]