HONG KONG (Reuters) – As soon as Hong Kong’s new national security law came into force last week, Ivan Ng removed all the protest-themed paintings, posters and flags from the list of items for sale at his Onestep Printing shop. 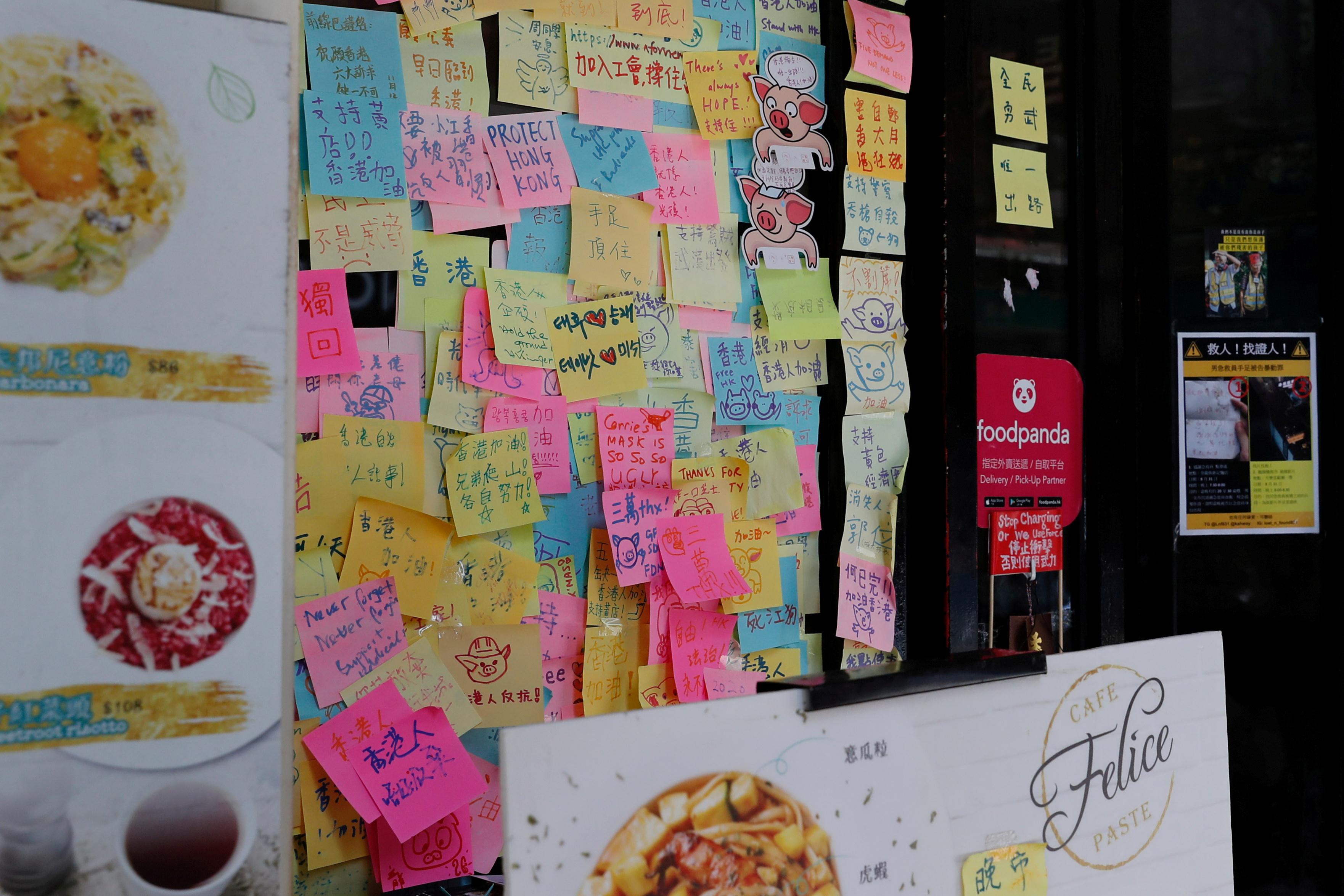 Sandra Leung at Wefund.hk, which sells protest-themed artwork and accessories, said she has suspended sales of protective gear worn by protesters, flags with the slogan “Liberate Hong Kong,” and other items carrying popular chants.

Jeffrey Cheong, owner of Hair Guys Salon, said he closed his shop down for a few days last week to remove pro-democracy decorations.

Ng, Leung and Cheong are three of the 4,500 or so small businesses in Hong Kong’s “yellow economy,” which supports pro-democracy protesters and vice versa. That circle of support is showing signs of weakening in the face of the new law.

“We took down all the protest-related products right after the law was implemented, because the law doesn’t have very clear boundaries of (what constitutes) subversion,” Ng said. In the past week, he said his overall sales are down as much as 80%.

Leung said she had withdrawn items for sale she described as “sensitive,” such as gas masks used by protesters and items with anti-police slogans.

The new law prohibits what China describes broadly as secession, subversion, terrorism and collusion with foreign forces, with up to life in prison for offenders. It came into force late last Tuesday, about an hour before the 23rd anniversary of China taking back control of the former British colony.

The Hong Kong government went further on Friday, declaring the popular protest slogan “Liberate Hong Kong! Revolution of our times” illegal. Public libraries have started to review books written by pro-democracy activists to see whether they violate the new law.

Hong Kong and Beijing authorities insist the city retains a “high degree of autonomy” but critics say the law effectively brings Hong Kong under the control of China’s Communist Party and violates China’s promise to safeguard Hong Kong’s freedom for 50 years after the 1997 handover.

Some businesses told local media they had been visited by the police who warned them that pro-democracy decorations were against the new law. Hong Kong police declined to disclose details of any such visits. In a statement to Reuters, a police representative said the objective of any enforcement action was not to target flags or slogans, but to “interdict people’s behavior on inciting and/or abetting others for the commission of secession or subversion.”

With or without police visits, many shops run by pro-democracy sympathizers have in the past week taken down their so-called Lennon Walls, the mosaics of colored Post-it notes with protest messages left by customers, named after the John Lennon Wall in communist-controlled Prague that was covered with Beatles lyrics and messages of political grievance.

The absence of these eye-catching features will make it harder to spot which shops support the pro-democracy movement. The same is true on the web.

An online platform called “Eat With You” that compiles lists of yellow shops and blue shops – whose owners are perceived to be pro-Beijing – deactivated last week. Another, hkshoplist.com, has taken down the reasons why it listed shops as yellow.

Some are finding new ways to stay in touch with their pro-democracy customers, such as putting up mosaics of blank Post-its and replacing posters with plain A4 sheets of paper.

One shop selling ice cream and drinks has taken down protest-themed decorations and updated its menu with fake patriotic slogans, hoping customers will appreciate the satire. “We must drink for the members of the Communist Party and people who love our country!” and “Special drinks for socialism with Chinese characteristics!” are two examples.

“The national security law is suppressing our freedom of speech,” said Selina Leung, 26, the manager of the shop called Talk 2 DeCream. “Rather than violating the law, we are trying to have fun during this hardship.”

(Reuters) – Starbucks Corp <SBUX.O> has stopped accepting reusable cups and thermos flasks from customers in Europe, the Middle East and Africa to prevent the spread of coronavirus, though it will still honor the promised discount for anyone carrying one. The world’s biggest coffee chain had announced a similar policy for the United States on […]

Covid 19 coronavirus: Another case recorded in Queensland, miner had returned from working in Northern Territory

COVID-19: WHO scientists arrive in Wuhan to begin investigating origins of pandemic