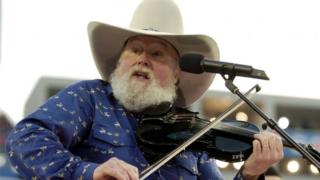 Country Music Hall of Fame musician Charlie Daniels died on Monday at the age of 83.

The prolific singer, songwriter and instrumentalist died in a Nashville hospital after a haemorrhagic stroke, his publicist said in a statement.

His hit, The Devil Went Down to Georgia, is an American classic and won his only Grammy Award in 1979.

He was best known for his fiddle playing, as well as his outspoken brand of conservative patriotism.

News of Daniels’ death was met with a flood of tributes.

Sharing a photo of him and Daniels performing together, country star Luke Bryan paid tribute to a “great man” and “hero”.

“A true patriot, and country music icon,” Bryan wrote. “Thank you for all your contributions on and off the stage. God bless you Charlie Daniels.”

Just learning of the passing of this great man. What a hero. A true patriot, Christian, and country music icon. Prayers to his family. Thank you for all your contributions on and off the stage. God bless you Charlie Daniels. pic.twitter.com/BiQ4FlAlPc

“I am heartbroken to hear that Charlie Daniels passed away,” country singer Jason Aldean wrote on Twitter. “He was one of the nicest/kindest people I have ever met.”

The singer, guitarist and fiddler started his career playing bluegrass in his native North Carolina before moving to Nashville in 1967. As a session musician, Daniels played on three of Bob Dylan’s records, including the Nashville Skyline album, as well as recordings for Leonard Cohen and Ringo Starr.

Though a Southern country rock musician, he bilked being easily labelled as such, pointing out that he had played with the likes of the Rolling Stones as well as Willy Nelson.

“I have never played those notes perfectly. I’ve never sung every song perfectly,” Daniels said in 1998 of his frequent shows. “I’m in competition to be better tonight than I was last night and to be better tomorrow than tonight”.

Through his decades long career, Daniels played at the White House, the Super Bowl, and for US troops stationed in the Middle East.

His favourite place to perform, he said, was “anywhere with a good crowd and a good paycheque”.

He was inducted into the Country Music Hall of Fame in 2016.

Daniels was a vocal advocate of veterans’ causes and an ardent supporter of the National Rifle Association (NRA), calling former-President Obama a “fresh-faced flower-child president and his weak-kneed, Ivy League friends” in an advert for the organisation.

Last month, criticising the anti-racist protesters taking to the streets, Daniels wrote on his website that the demonstrations “against the unjust killing of a black man” were not simple protests, “but a revolutionary street battle against America and everything we stand for”.

“Gun sales are through the roof and America is locked and loaded to protect their families and their neighbourhoods,” he said

Daniels had previously suffered from a mild stroke in January 2010. He had a pacemaker implanted in 2013 but continued to take the stage to perform.

He is survived by his wife, Hazel, and son, Charlie Daniels, Jr.

City mayor invokes emergency powers to order immediate removal of statues, citing safety concerns amid protests. Richmond, Virginia Mayor Levar Stoney on Wednesday ordered the immediate removal of all Confederate statues on city land, saying he was using his emergency powers to speed up the healing process for the former capital of the Confederacy amid […]

WASHINGTON (Reuters) – White House economic adviser Kevin Hassett said on Tuesday the current dip in oil prices is due to a “very short-run thing” and markets will find a new normal. “This is a very very short-run disruption,” Hassett said in an interview with Fox News a day after the May futures contract for […]

FRANKFURT (Reuters) – German prosecutors said on Wednesday they were searching offices as part of an international fraud investigation into potentially illegal emissions software found in engines used in Fiat, Alfa Romeo, Jeep and Iveco vehicles. The searches in Germany, Italy and Switzerland focus on individuals at an international automotive company and an international commercial […]

Prince Andrew a ‘bigger crisis’ for Queen than Harry and Meghan, expert claims

Zimbabwe brings back foreign currencies ahead of coronavirus lockdown

UK-EU proximity is not a reason to restrict trade: PM Johnson’s spokesman

This is another News Portal > Business > Money FM Podcasts of the week: Fate of Singapore's aviation sector