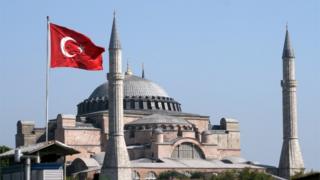 Turkey’s Council of State is due to decide if the Hagia Sophia in Istanbul can be converted into a mosque.

Built in the Sixth Century on the orders of Byzantine Emperor Justinian I, it was the world’s largest cathedral for nearly 1,000 years.

The Unesco World Heritage site was turned into a mosque when the Ottoman Empire captured the city in 1453, but became a museum in the 1930s.

It may become a mosque again if the court approves the move on Thursday.

Islamists in Turkey have long called for it to be converted, but secular opposition members have opposed the move. The proposal has prompted international criticism, from religious and political leaders worldwide.

The head of the Eastern Orthodox Church has opposed the move, as has Greece – home to many millions of Orthodox followers.

Culture Minister Lina Mendoni has accused Turkey of reviving “fanatical nationalist and religious sentiment”, insisting no change to a Unesco World Heritage site can take place without being approved by the body’s own intergovernmental committee.

The UN body had written to Turkey about the proposal, but received no reply, he said.

The iconic, domed building sits in Istanbul’s Fatih district, on the west bank of the Bosporus.

Justinian I ordered the massive construction built in 532, when the city – then known as Constantinople – was the capital of the Byzantine Empire, also known as the Eastern Roman Empire. Engineers brought materials from across the Mediterranean to build the colossal cathedral.

On completion in 537 it became the seat of the Orthodox patriarch of the capital. Byzantine imperial ceremonies such as coronations took place at the building.

The Hagia Sophia served as the home of the Eastern Orthodox Church for nearly 900 years, barring a brief period in the 13th Century when it was a Catholic cathedral under control of European invaders who ransacked and occupied Constantinople during the Fourth Crusade.

But in 1453, the Ottoman Empire under Sultan Mehmed II captured Constantinople and renamed the city Istanbul, finishing off the Byzantine Empire once and for all.

On entering the Hagia Sophia, Mehmed II insisted it be renovated and converted into a mosque. He attended the first Friday prayers in the building, days after it was ransacked by invading forces.

Ottoman architects removed or plastered over Orthodox symbols inside and added spires and minarets to the structure. Until the completion of Istanbul’s Blue Mosque in 1616 the Hagia Sophia was the main mosque in the city, and its architecture inspired builders of the Blue Mosque and several others around the city and the world.

After the end of World War I in 1918, the Ottoman Empire was defeated and divided by the victorious Allies. Nationalist forces, however, rose up and created modern-day Turkey from the ashes of that empire.

The founder of Turkey and the secular republic’s first president, Mustafa Kemal Ataturk, ordered the Hagia Sophia to be turned into a museum. Since reopening to the public in 1935 it has become one of Turkey’s most visited tourist attractions.

Why does it matter?

Because of its 1,500-year history, the Hagia Sophia holds immense religious, spiritual and political significance for groups inside and outside Turkey.

Islamist groups and devout Muslims demand the building be turned back into a mosque, and have staged protests outside it, against a 1934 law that bars religious services at the site.

President Erdogan has echoed those calls. In a campaign speech ahead of local elections last year he said it had been a “very big mistake” to turn the Hagia Sophia into a museum, and he has since reportedly asked aides to examine how to convert the building.

The head of the Eastern Orthodox Church, known as the Ecumenical Patriarch of Constantinople, is still based in Istanbul. Patriarch Bartholomew I warned on Tuesday that the conversion of the building would “disappoint millions of Christians” and fracture two worlds.

US Secretary of State Mike Pompeo warned that any change in the Hagia Sophia’s status would diminish its ability to “serve humanity as a much-needed bridge between those of differing faith traditions and cultures”.

Last week US Ambassador at Large for International Religious Freedom Sam Brownback called on Turkey to leave the building as it was.

The Hagia Sophia holds enormous spiritual & cultural significance to billions of believers of different faiths around the world. We call on the Govt of #Turkey to maintain it as a @UNESCO World Heritage site & to maintain accessibility to all in its current status as a museum.

But Turkish foreign minister Mevlut Cavusoglu insisted that Athens had no say in the decision as the building was on Turkish territory.

“What we do in our country and with our property is up to us,” he reportedly told Turkish broadcaster 24 TV.

(Reuters) – Fast-food chain Wendy’s Co <WEN.O> said on Thursday it would defer rent and ease royalty and marketing fee payments for franchisees, amid growing pressure in the restaurant industry due to coronavirus-related outlet closures. The Ohio-based restaurant chain also reported same-store sales growth of only 2.8% so far in the first quarter and withdrew […]

(This March 2 story corrects spelling of Maguire in paragraph 9) By Patricia Zengerle WASHINGTON (Reuters) – U.S. Senate Majority Leader Mitch McConnell said on Monday he was pleased President Donald Trump had announced a nominee for director of national intelligence, without expressing an opinion about Representative John Ratcliffe’s fitness for the job. Trump announced […]

BRUSSELS (Reuters) – Executives from planemakers Airbus <AIR.PA> and Boeing <BA.N> said on Tuesday that it was too early to say whether the outbreak of a new coronavirus would affect demand for aircraft. Christian Scherer, chief commercial officer of Airbus <AIR.PA>, told an industry conference in Brussels that the coronavirus could cause an adjustment to […]

This is another News Portal > World News > UK weather forecast: Britain braced for BITTER conditions with even London hit – charts