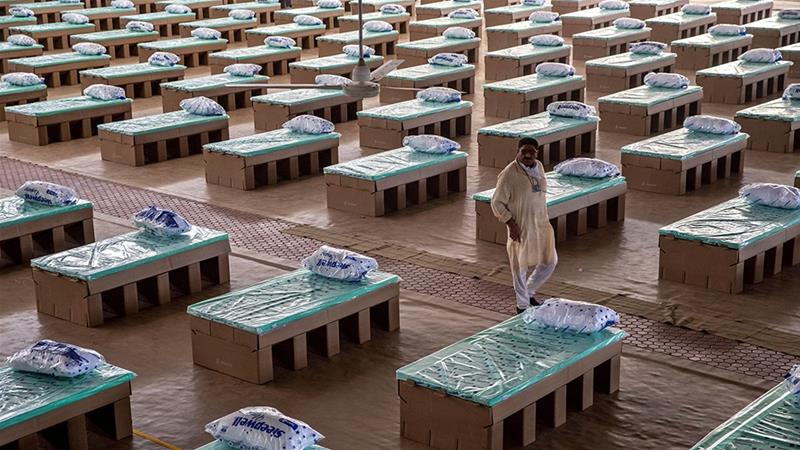 New Delhi has set up one of the world’s largest makeshift hospitals with 10,000 beds as coronavirus cases surged passed 87,000 in the Indian capital.

The city of 25 million has emerged as India’s biggest COVID-19 hotspot with 2,742 deaths. The number of infections in India passed 500,000 this weekend, with more than 17,000 deaths now recorded.

Critics have accused the city authorities of squandering the opportunities provided by the strict lockdown imposed on March 25, as not enough testing and contact tracing were done during the nearly 60-day period.

City hospitals also struggled as more than 50,000 cases appeared in the month of June alone.

The two-layer power structure in the capital – divided between the chief minister and central government-appointed Lieutenant Governor – also led to delays in decision-making, analysts say.

Authorities have deployed 10,000 disposable beds made out of cardboard on the premises of the Radha Soami religious centre on the outskirts of the city, senior official BM Mishra said on Monday.

While 2,000 beds were already staffed by the requisite doctors and nurses, the facility will be fully operational by July 5.

“The beds are easy to assemble and were manufactured in no time.

Because of this, we were able to get this facility started in 10 days’ time, whereas other manufacturers would take at least twice the time,” Mishra told DPA news agency.

The manufacturers claim the most important thing about the bed is that the virus only stays on the surface of the cardboard for 24 hours, media reports said. 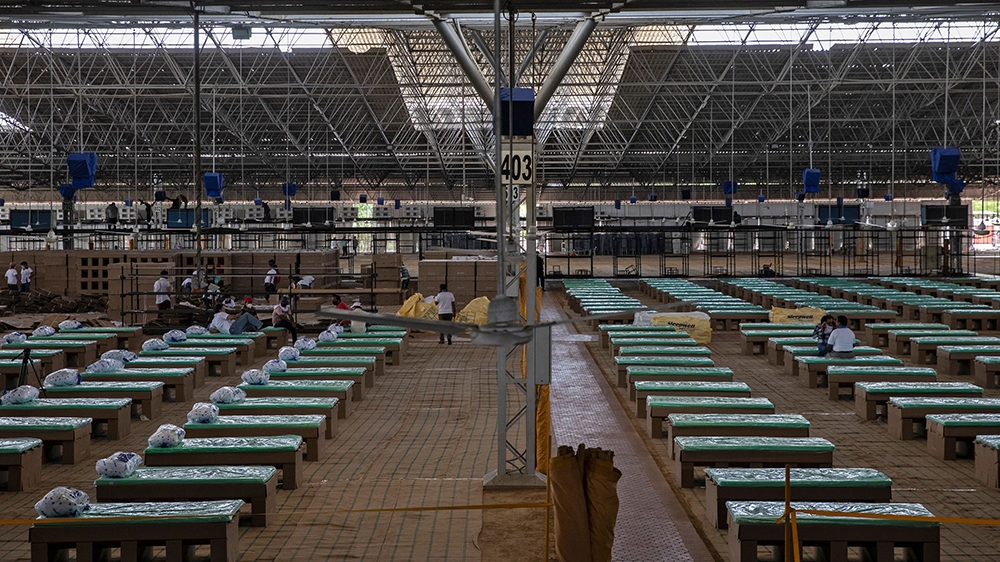 India’s largest COVID-19 care facility, reportedly the size of 22 football fields, will treat “mild to moderate” coronavirus patients and will be operated by the paramilitary Indo-Tibetan Border Force, which guards the India-China border.

“This centre’s air-conditioning totalling 18,000 tonnes is unique in that it will use 20 percent fresh air and its flow and ventilation has been worked out to reduce ambient viral load,” Mishra said.

In another move to alleviate the city’s overwhelmed healthcare system, 500 railway coaches were being refitted to serve as hospital wards and provide an additional 8,000 beds.

The Supreme Court recently pulled up authorities after media reports of people being turned away from hospitals and crematoria and improper treatment of patients.

Delhi Chief Minister Arvind Kejriwal said facilities had been increased on a war footing and there were no longer any shortages of hospital beds after authorities held emergency meetings on dealing with the outbreak.

Delhi is carrying out a huge survey for the coronavirus, in which officials were visiting households to record every resident’s health details and prescribe virus tests to those who show or report symptoms.

STOCKHOLM (Reuters) – Swedish truck maker Volvo <VOLVb.ST> said on Tuesday it had signed a deal with German rival Daimler <DAIGn.DE> to set up a joint venture to develop and produce fuel cell systems for heavy-duty vehicles. Daimler will consolidate all its current fuel cell activities in the joint venture. Volvo said in a statement […]

A baby is fighting for her life in hospital after being injected with heroin, police have said. The two-month-old infant, who has not yet been named, is on life support at Cook Children's in Fort Worth, Texas. Police say she was found unconscious with injection marks and tested positive for heroin. Authorities have said it's […]

Edmonton police shut down the northbound lanes of Manning Drive at 137 Avenue on Saturday afternoon following a serious collision. Officials said the incident involved a motorcycle and a U-Haul truck. There was no word on injuries or how many people were involved in the collision. Drivers are being asked to avoid the area. Police […]

US inauguration: Donald Trump scrambling to get guests to his final farewell