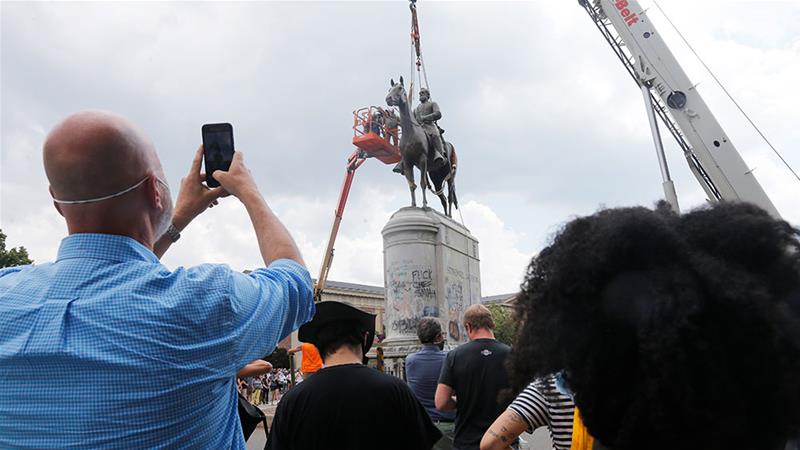 Richmond, Virginia Mayor Levar Stoney on Wednesday ordered the immediate removal of all Confederate statues on city land, saying he was using his emergency powers to speed up the healing process for the former capital of the Confederacy amid weeks of protests against police brutality and racial injustice.

Another famous statue on city land is that of General JEB Stuart. Virginia Governor Ralph Northam had previously ordered the most prominent statue along the avenue, that of General Robert E Lee, which sits on state land. The removal has been stalled pending the resolution of a lawsuit from at least two people who oppose its removal.

Stoney said he was also moving quickly because protesters have already toppled several Confederate monuments elsewhere and he was concerned that people could be hurt trying to take down the gigantic statues.

“We have an urgent need to protect the public,” Stoney said in a statement.

Stoney’s move came on the day a new state law took effect granting control of the monuments to the city. The law outlines a removal process that would take at 60 days to unfold.

But during a City Council meeting Wednesday morning, Stoney baulked as the council scheduled a special meeting for Thursday to formally vote on a resolution calling for the immediate removal of the statues.

“Today, I have the ability to do this through my emergency powers,” Stoney said. “I think we need to act today.”

About an hour later, work crews were spotted near the Jackson statue.

Videos posted on Twitter showed workers being lifted in a crane to the top of the statue and attempting to attach something to it.

Interim City Attorney Haskell Brown said any claim that Stoney has the authority to remove the statues without following the state process would contradict legal advice he has previously given the council and city administration.

By Lisa Baertlein and David Kirton LOS ANGELES/SHENZHEN (Reuters) – Air freight rates are skyrocketing after the grounding of many passenger flights in Asia has left shippers scrambling to book limited spots on cargo planes as Chinese industrial production restarts, according to industry insiders. About half of the air cargo carried worldwide normally flies in […]

By Olesya Astakhova and Katya Golubkova MOSCOW (Reuters) – This week’s oil price rout had become inevitable and cutting output has ceased to make sense because it is unclear how deep the impact of the coronavirus on demand will be, Russia’s deputy energy minister said in an interview with Reuters on Wednesday. Last week, Saudi […]

WASHINGTON (Reuters) – The U.S. government’s decision to raise tariffs on European-built aircraft will hit U.S. airlines already facing a shortage of aircraft and complicate efforts to reach a negotiated settlement with the European Union, Airbus <AIR.PA> said. The European planemaker said it would continue discussions with its U.S. customers to “mitigate effects of tariffs […]

Hong Kong's leader is being paid in cash due to US sanctions. Carrie Lam earns $56,000 a month and says money is now piling up at her house.

Ethiopia’s conflict in Tigray: Women describe how rape is used as a weapon

Bankers in Asia brace for a virus-related deal drought