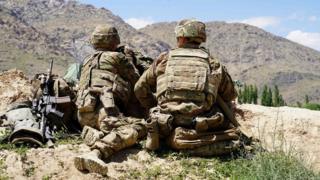 The White House is under pressure to explain how much the administration knew about allegations Russia offered the Taliban bounties to kill US troops.

Officials have insisted that President Donald Trump was not “personally” informed of the alleged plot in Afghanistan in 2019.

But reports say the president received a written briefing earlier this year.

There is concern that Mr Trump might have had access to information about threats to US forces but did not act.

The intelligence reportedly arrived amid US attempts to negotiate a peace deal to end the 19-year war in Afghanistan and while Mr Trump sought to improve relations with Russian President Vladimir Putin.

Russia has denied the initial reports while the Taliban said it had not done any deal with Russian intelligence. The allegations come as Mr Trump seeks re-election in the November poll.

What are the new developments?

On Monday, the New York Times, citing two unnamed US officials, said the intelligence assessment had been included in the President’s Daily Brief report – a written document with key government intelligence – in late February.

CNN and the Associated Press have also reported that the president received the intelligence in a written briefing earlier this year, without specifying when. Mr Trump is said to largely ignore the President’s Daily Brief, relying more on oral briefings by intelligence officials a few times a week.

White House Press Secretary Kayleigh McEnany did not answer when asked by reporters whether the information had been included in the president’s written briefing, saying only that Mr Trump had not been “personally briefed”.

Ms McEnany also said there was “no consensus within the intelligence community” about the assessment. But former intelligence officials told US media that, in previous administrations, claims of such importance would be reported to the president, even if the evidence had not been fully established.

Some expressed alarm about the claims, calling for action against Russia and President Putin be taken if the intelligence reports, currently under review, were confirmed.

Representatives Adam Kinzinger and Michael McCaul, the ranking member of the House Foreign Affairs Committee, said in a statement: “If the intelligence review process verifies the reports, we strongly encourage the Administration to take swift and serious action to hold the Putin regime accountable.”

In a separate statement, Representatives Liz Cheney and Mac Thornberry, who is the top Republican on the House Armed Services Committee, said: “We believe it is important to vigorously pursue any information related to Russia or any other country targeting our forces.”

Democrats were not included in the initial meeting, and they have been scheduled to take part in a briefing with White House officials on Tuesday.

Late on Monday, the Associated Press reported that top officials in the White House were aware in early 2019 of the classified intelligence on the topic, and that the assessment had been included in at least one of President Trump’s written daily briefings at the time.

Separately, journalist Carl Bernstein reported that officials close to Mr Trump were convinced the president himself “posed a danger to the national security” given how “consistently unprepared” he was in dealing with foreign leaders.

Writing on CNN, Bernstein – one of the journalists who investigated the Watergate scandal in the 1970s – said there were special concerns over “[Mr] Trump’s deference to [Mr] Putin”, with the US president “inordinately solicitous of [Mr] Putin’s admiration” while ignoring important matters on the bilateral agenda.

His report, based on unnamed sources with knowledge of hundreds of highly classified calls with foreign heads of state, echoes remarks made by former members of the Trump administration, including John Bolton, who served as national security adviser and said Mr Trump “remained stunningly uninformed on how to run the White House”.

In an interview to promote his book, Mr Bolton said of Mr Trump: “I think Putin thinks he can play him like a fiddle.”

What is the context?

The unnamed officials cited by the New York Times’ initial report said US intelligence agencies had concluded months ago that a unit of Russia’s GRU military intelligence agency had sought to destabilise its adversaries by covertly offering bounties for successful attacks on coalition forces.

Islamist militants, or armed criminal elements closely associated with them, were believed to have collected some money, the newspaper said.

Twenty American troops died in Afghanistan in 2019, but the New York Times said it was not clear which deaths were under suspicion.

The officials quoted by the New York Times said the White House’s National Security Council had considered how to respond, including imposing an escalating raft of sanctions against Russia.

According to the Times story on Friday, President Trump was briefed on the reports in March. Mr Trump denied having been briefed, writing on Twitter on Sunday that neither he nor Vice-President Mike Pence had been told “about the so-called attacks on our troops in Afghanistan by Russians”.

(Reuters) – Charles Schwab <SCHW.N> reported the strongest start to a year with $45.3 billion in fresh assets under management during the first two months of 2020, driven by heightened volatility faced by equity markets amid the coronavirus outbreak. “Our clients have set multiple new single-day records for trading in recent weeks, reaching a high […]

HSBC to push on with overhaul ‘wherever possible’ despite crisis

By Lawrence White LONDON (Reuters) – HSBC will press ahead with plans to shift capital from underperforming businesses, cut costs and strip out layers of management, despite problems caused by the coronavirus pandemic. Chief Executive Noel Quinn said HSBC <HSBA.L> would proceed “wherever possible” with a transformation plan outlined in February, but had paused most […]

By Graham Fahy and Terje Solsvik DUBLIN/OSLO (Reuters) – The grounding of virtually all flights by Europe’s largest budget airline and European air traffic data on Tuesday highlighted the enormity of the shock to aviation industries from the coronavirus now emptying skies around the globe. Ryanair <RYA.I> told customers it had virtually written off the […]

OPEC meetings to go ahead this week despite virus: sources