Demonstrators in Abuja demand ‘justice’ after a series of high-profile rape cases sparked outrage in the country. 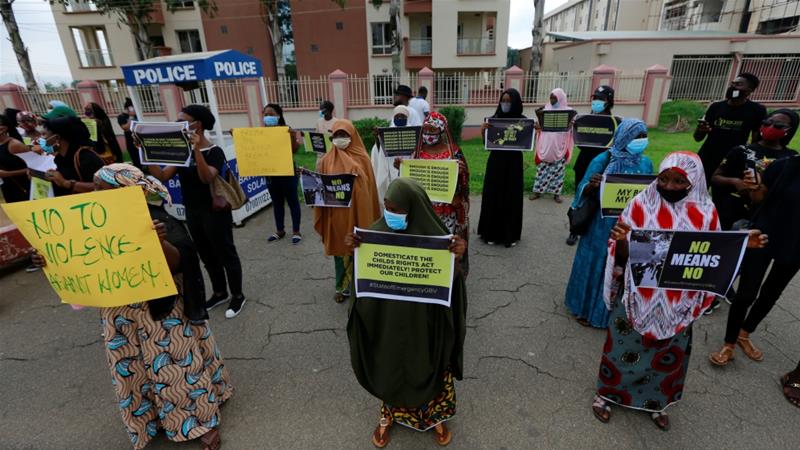 Human rights campaigners have rallied in Nigeria’s capital to raise awareness about violence against women after a series of high-profile rape cases sparked an outcry in the country.

More than 200 protesters marched around police headquarters in Abuja, chanting slogans and holding banners that read “Justice for all Nigerian girls and women” and “No means no”.

It was one of many activities planned by campaigners to call attention to the issue and urge politicians to allocate more funds to tackle sexual violence and ensure police independence.

The latest outpouring of anger has been unleashed by the cases of three women and girls who were killed or raped in incidents activists say showcase the widespread sexual violence in Nigeria.

#JusticeForUwa has been one of the hashtags trending on social media in the last week after Vera Uwaila Omosuwa, a 22-year-old student, died two days after she was reportedly raped in a church in the southern city of Benin.

“Children are dying, women are dying, enough is enough,” Dorothy Njemanze, one of the protest organisers, was quoted as saying by Reuters news agency.

Njemanze said she and other campaigners were “watching every step of everything they [politicians] say and do on sexual based violence”.

Nigeria’s most senior policeman has ordered the immediate deployment of additional investigators to specialist gender violence desks, a police statement said on Tuesday.

“This is to strengthen and enhance the capacity of the units to respond to increasing challenges of sexual assaults and domestic/gender-based violence linked with the outbreak of the COVID-19 pandemic and other social ills within the country,” it added.

Two other recent cases have also prompted people to express their anger using the #JusticeForJennifer and #JusticeForTina rallying cries.

In April, an 18-year-old known only as Jennifer was allegedly attacked and raped by a gang of five men in Kaduna, a city in northern Nigeria.

The case gained attention only after her relatives – scared the accused would escape justice – released a video online of family comforting the traumatised teen that was shared tens of thousands of times.

Now, local police say two men have been arrested for the rape and three other suspects are being sought.

Meanwhile, a 16-year-old high school student called Tina Ezekwe was shot and killed after police opened fire at a bus stop in Lagos, the country’s biggest city, during a nighttime coronavirus curfew.

After an outcry online, the police force said two officers had been arrested and were facing disciplinary action and possible prosecution.

Don’t miss a thing by getting the Daily Star’s biggest headlines straight to your inbox! The mum of a two-year-old who was allegedly murdered by his own babysitter has revealed to a court in Queensland, Australia the "red flags" she noticed before his death. Lisa Rose Halcrow, 41, was charged last year in relation to […]

LONDON (Reuters) – Britain can be the superman of free trade which protectionists are trying to choke but it will not seek to undermine the European Union with a race to the bottom, British Prime Minister Boris Johnson said on Monday. “Humanity needs some government somewhere that is willing to make the case powerfully for […]

Trump says another country could join Israel-UAE accord

WASHINGTON (Reuters) – U.S. President Donald Trump said on Thursday it was possible another country could soon join a diplomatic accord between Israel and the United Arab Emirates. Trump is to host a signing ceremony next Tuesday that will include delegations with Israel and the UAE. His negotiators have been trying to get other Gulf […]

Virgin Galactic to run as a critical infrastructure business during pandemic

Mashed potatoes recipe: Best when prepared at the last minute – The Denver Post