HONG KONG (Reuters) – Support for year-long pro-democracy protests in Hong Kong has slipped, now getting the backing of a slim majority, as the city braces for the imposition of Beijing-drafted national security legislation, a survey conducted for Reuters showed. 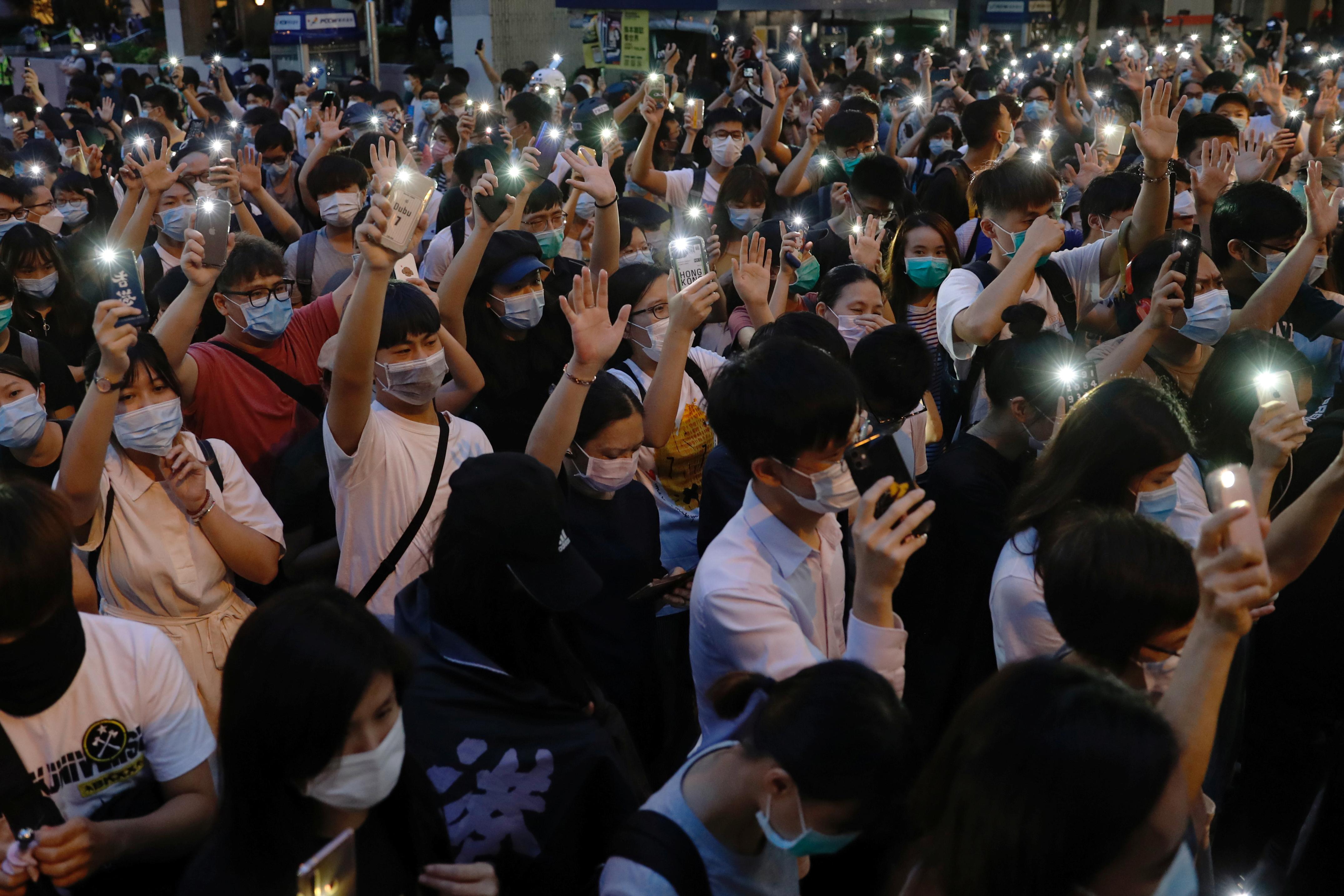 Protests escalated last June over a since-withdrawn bill that would have allowed extraditions of defendants to mainland China. They later morphed into a push for greater democracy, often involving violent clashes with the police.

The protests have resumed, but with far fewer participants, since China announced plans for the security law, which has alarmed foreign governments and democracy activists in Hong Kong. [nL4N2DY03K]

The survey conducted by the Hong Kong Public Opinion Research Institute between June 15-18 showed the legislation is opposed by a majority in the financial centre.

But the poll also showed support for protests dropping to 51% from 58% in a previous poll conducted for Reuters in March, while opposition to them rose to 34% from 28%.

“It may be psychological, because Hong Kong people see Beijing is getting more hardline,” said Ming Sing, associate professor of social sciences at Hong Kong University of Science and Technology.

“If you keep insisting (on the demands) it’s impractical.”

Events on the ground also point to a loss in momentum, with most demonstrations in recent weeks attended only by hundreds and ending quickly. Police, citing coronavirus restrictions, have not given permission for rallies recently and have arrested large numbers of those who turned up anyway.

The particular demands of the movement have also seen a drop in support. The request for an independent commission of inquiry to look into how police handled the demonstrations saw a 10 percentage points drop from March to 66%.

Universal suffrage, another key demand, was backed by 61%, down from 68%. The resignation of Hong Kong leader Carrie Lam was supported by 57% versus 63% three months ago.

Samson Yuen, assistant professor in the political science department at Lingnan University, said support for the protesters’ demands was “still high” but could have dropped because the security law has overtaken the protests as the main topic in the public discourse.

“Who would still talk about (protest) demands when the national security law is coming?,” said Yuen.

Lam’s office and China’s Hong Kong and Macau Affairs Office, which comes under the State Council, or cabinet, did not respond to requests for comment.

For the poll, which had a margin of error of plus or minus 3.2 percentage points, 1,002 respondents were randomly surveyed by telephone. The results were weighted according to the latest population figures.

The poll was conducted when Beijing’s intention to introduce legislation against terrorism, subversion, separatism and foreign interference was known but few details were available.

While the draft of the new law is yet to be finalised, key features of the legislation have since been released, revealing that Communist Party central authorities will have overarching powers over its enforcement, including final interpretation rights. [nL4N2DY03K]

The poll showed 49% of respondents strongly opposed Beijing’s move, with 7% “somewhat” opposing it. Support for the legislation added up to 34%, with the rest indifferent or undecided.

“I object to the law because the (Beijing) government is interfering in Hong Kong’s business,” said engineer Charles Lo, 29, who participated in the survey. “It will also suppress our freedom of speech and hinder the democracy movement.”

The law has stoked fears that Beijing is further eroding extensive autonomy promised to the territory when Britain handed it back to China under a “one country, two systems” formula in 1997.

Hong Kong and Beijing authorities have repeatedly said the legislation would only target a small number of “troublemakers”, while rights and freedoms would be preserved. They say it will bring stability to a city rattled by the protests.

“Before June last year, I didn’t think Hong Kong needed national security laws because we were so peaceful and safe, but now I think it’s necessary,” said another survey respondent, Hui, a retiree in her 50s.

The poll also showed that support for the idea of Hong Kong independence, which is anathema to Beijing and is expected to be a focal point in the looming legislation, remained relatively unchanged at 21%. Opposition to the idea grew to 60% from 56%.

Another finding was a rise in support for local, pro-Beijing politicians ahead of the Sept. 6 election for the Legislative Council, known as Legco.

Pro-Beijing candidates were supported by 29% of respondents, up from 22%. Support for pro-democracy politicians remained strong at 53%, but dropped 5 points.

A split in lower level district elections in November resulted in the pro-democracy camp winning over 80% of the seats.

TOKYO (Reuters) – Japanese automakers on Wednesday said they would temporarily close more vehicle plants in Europe and Asia as the spread of the coronavirus prompts countries to instruct non-essential businesses to suspend operations. A growing number of global automakers have been shuttering plants in Europe and beyond as the COVID-19 outbreak prompts governments to […]

By David Shepardson and Tracy Rucinski WASHINGTON/CHICAGO (Reuters) – U.S. President Donald Trump said on Thursday that airlines could receive details this weekend about the terms of a $32 billion payroll grant to offset the impact of the coronavirus outbreak, which sources told Reuters has received around 275 applicants. “We’ll be probably putting out a […]

By Jarrett Renshaw and Simon Lewis NORTH CHARLESTON, S.C. (Reuters) – As Bernie Sanders looked to cement his front-runner status in the U.S. Democratic presidential race after his dominant win in Nevada, his rivals sought in rallies on Sunday to blunt his momentum ahead of 15 nominating contests in the next 10 days. Sanders, an […]

Claire Trevett: A lot is at stake in Government’s ‘Olympics of Covid-19 Vaccinations’ but a medal could be tricky

Sunak ‘a child of the slums’, claims Russian mouthpiece