JD Sports has bought back its Go Outdoors chain for £56.5m after putting it into administration.

The move will “preserve as many jobs as possible”, JD Sports said, with a major restructuring plan aimed at retaining the “majority” of stores.

On Saturday, Sky News had exclusively revealed that Go Outdoors was on the brink of administration – four years after retail giant JD Sports Fashion first bought it for £100m.

Sky’s City editor Mark Kleinman said then that JD was expected to use an insolvency process to restructure the chain, which trades from 67 shops.

Manchester-based JD Sports, which has a market value of £6.3bn, was said to be keen to retain control of a slimmed-down Go Outdoors.

On Tuesday evening, JD Sports confirmed it had hired administrators from Deloitte.

Options for Go Outdoors included a sale, but JD Sports said the business had a potential future within the wider group “if fundamentally restructured”.

Existing staff will be transferred as part of the pre-pack administration sale, they added. 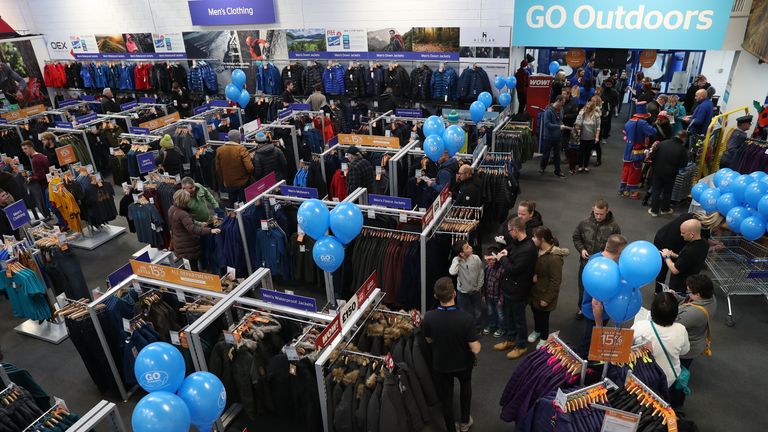 Peter Cowgill, executive chairman of JD Sports, said: “As a consequence of COVID-19, Go Outdoors was no longer viable as previously structured and would have absorbed capital at an unsustainable rate for the foreseeable future.

“Having investigated all available options for the business, we firmly believe that this restructuring will provide Go Outdoors with a platform from which it can progress whilst remaining a member of the group.

“Most importantly, we are pleased that it will protect the maximum number of jobs possible.”

Michael Magnay, joint administrator, said: “Like many high street retailers, Go Outdoors Ltd has been seeking to address a number of underlying business challenges in the current UK retail environment, which have been exacerbated by the impact of COVID-19.

“This successful sale will provide Go Outdoors with an opportunity to restructure its business to secure its future for the long term.

“I’m particularly pleased that we have been able to secure the employment of all the company’s workforce, and we’d like to thank all employees and key stakeholders for their support throughout this process.”

FILE PHOTO: People walk on Wall Street in front of the New York Stock Exchange (NYSE) in New York, U.S., February 6, 2018. REUTERS/Brendan McDermid(Reuters) – Nearly eight out of 10 corporate executives have experienced poor mental health during the coronavirus crisis, prompting a number of them to re-evaluate and improve work-life balance, a survey […]

STOCKHOLM (Reuters) – Swedish-Danish SAS (SAS.ST) said on Wednesday that a growing number of bondholders had indicated they backed the debt to equity conversions needed for the airline to move ahead with recapitalisation plans to see it through the pandemic. The airline, part-owned by the governments of Sweden and Denmark, is looking to drum up […]

Chico’s FAS, seeking improvement in its sales trends this holiday season, has begun offering same-day delivery from its Chico’s, White House Black Market and Soma boutiques across the U.S. through a partnership with Roadie. The retailer said the same-day service is available in 97 percent of its 1,310 boutiques in the U.S. Through the Roadie […]

Unemployment Claims Drop, but Holiday Week May Be a Factor

This is another News Portal > World News > South Africa to parole 19,000 prisoners to curb coronavirus