Distancing rule will reduce from July 4 when pubs and restaurants are allowed to reopen in England, UK leader says. 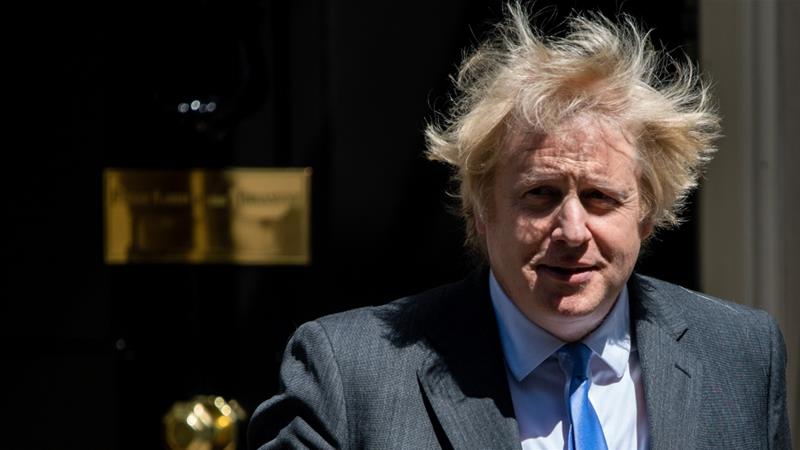 UK Prime Minister Boris Johnson has said the two-metre (6.6-foot) distancing rule will be revised to “one-metre plus” from July 4 when pubs and restaurants are allowed to reopen in England.

Johnson told Parliament’s lower chamber on Tuesday the country’s “long national hibernation is beginning to come to an end”.

The social distancing rule has been very hard on restaurants and pubs and other sectors of the hospitality industry, he said.

Guidelines were to be issued later on Tuesday, Johnson said, noting they would include avoiding face-to-face seating, and adjusting shift rosters so that staff work in set teams.

While confirming the easing of the measures, Johnson said: “People should act in a responsible way.”

Amid the easing, cinemas and museums would also reopen along with libraries, places of worship, as well as hotels and bed and breakfast facilities.

Rest of the UK

Johnson said England. Scotland, Wales and Northern Ireland have their own measures.

At a separate news conference, Scottish First Minister Nicola Sturgeon said the two-metre rule on social distancing was to remain in place in Scotland pending a report from an advisory group due on July 2.

In an exchange with Ian Blackford of the opposition Scottish National Party (SNP), Johnson said “we will see future outbreaks”, adding authorities “will be in a much better position now to control those outbreaks”.

The government believed that primary and secondary schools can recommence in September, he said.

Opposition Labour leader Keir Starmer said he believed “the government is trying to do the right thing and in that, we will support them”.

Johnson took part in a meeting on Monday with the government’s COVID-19 strategy committee, where the changes were discussed.

Health Secretary Matt Hancock said on Monday the virus was “in retreat”.

The UK on Monday saw its lowest daily coronavirus-related death toll since mid-March, with just 15 deaths recorded in the previous 24 hours, according to the health ministry.

It was the first time in months that the country had recorded fewer than 1,000 daily new infections.

The UK has been the European country hardest hit by the pandemic, with more than 42,600 related deaths.

PARIS (Reuters) – French economic activity and household spending are running at about 65% of normal levels due the coronavirus outbreak, the INSEE official statistics agency said on Thursday. INSEE gave the first picture of the impact of the nationwide lockdown as it published its monthly business confidence index, which saw its biggest single drop […]

By Howard Schneider WASHINGTON, March 28 (Reuters) – It may, as House Majority Leader and Maryland Democrat Steny Hoyer said on Friday, be out of love that the United States agreed to shut down much of its economy to stop a viral epidemic and save lives. It may, as Treasury Secretary Steven Mnuchin said, be […]

Coronavirus could force GM to delay its redesigned 2021 SUVs