Much of the UK will bask in scorching temperatures this week, as the mercury soars to the mid-30s. Warm air and high pressure is set to move in from Europe and the Atlantic early this week, to ensure Britons enjoy settled conditions and periods of glorious sunshine. But the sunny weather could be accompanied by thunderstorms and heavy rain by the end of the week forecasters claim.

Temperatures are set to climb this week, with the mercury reaching the high 20s on Monday before getting even warmer on Wednesday and Thursday.

By the end of the week, temperatures could reach 34C, with the Met Office predicting “heatwave conditions” for parts of the UK.

Met Office Chief Meteorologist, Dan Suri said: “Northern Ireland and Scotland will be under a band of cloud and rain on Monday and Tuesday, however, it’ll be dry elsewhere with plenty of warm sunshine and temperatures reaching 28C or 29C in a few spots on Tuesday.

“Temperatures will continue to climb through the week with a hot spell developing across much of England and Wales. 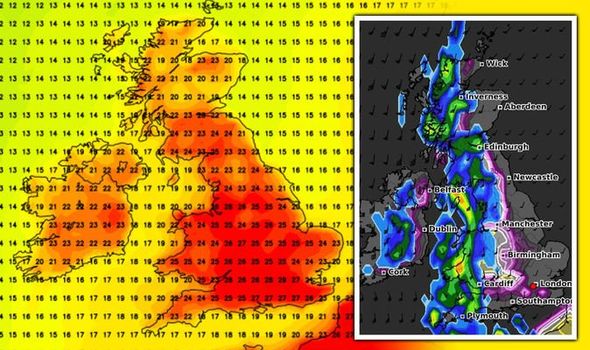 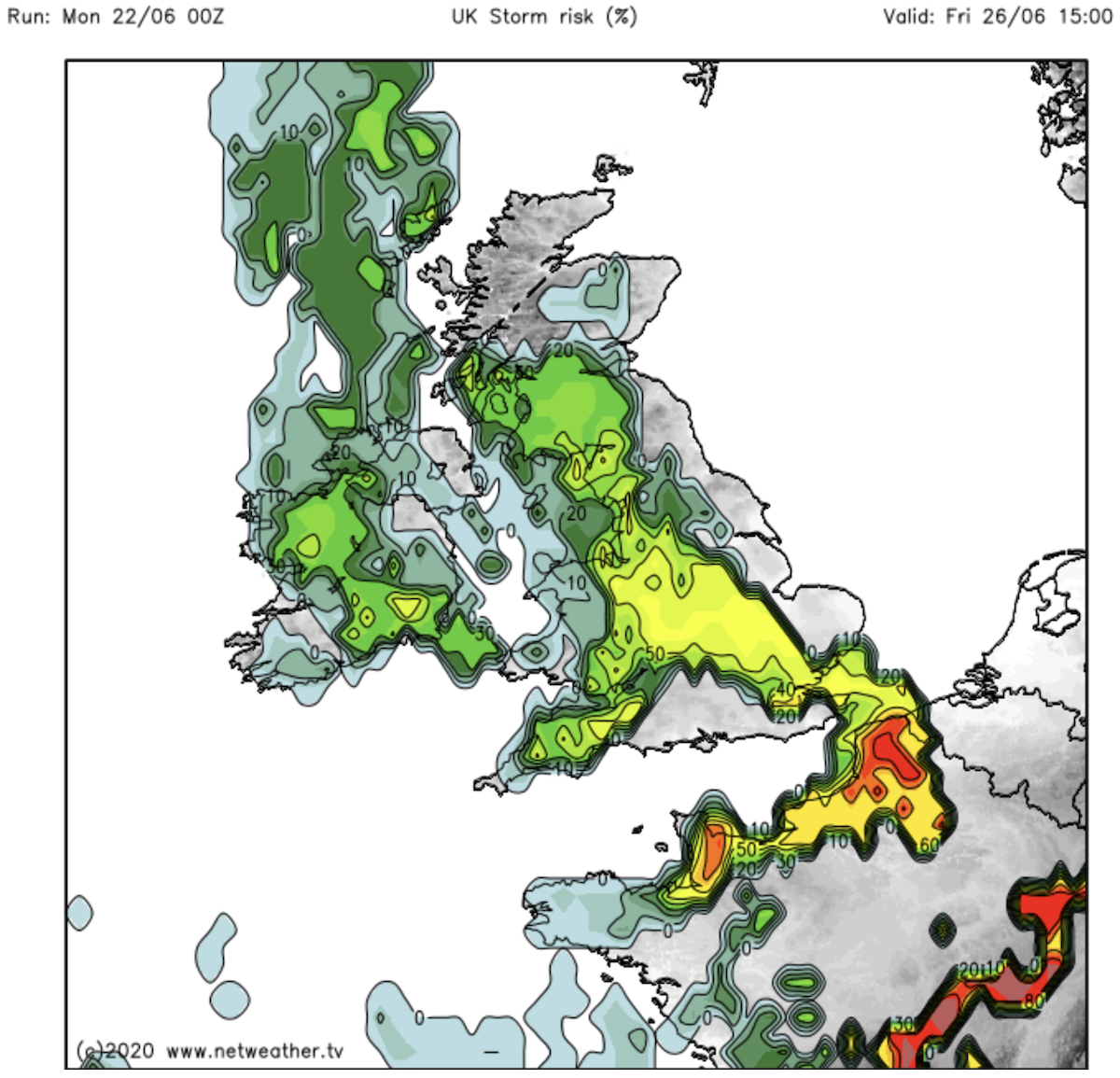 “From Wednesday temperatures will widely reach into the high twenties Celsius and it’ll be hot across much of the UK, especially central and southern England where we could see highs of 30C to 34C.

“This hot weather is expected to last until at least Friday and so heatwave conditions are likely to develop for some areas this week.”

Netweather forecasters also predict highs of 34C in London on Wednesday and Thursday, with the Midlands and southeast expected to reach 30C.

Western Scotland and Northern Ireland is likely to see thick clouds and showers this week, but by Thursday the two northern parts will also experience a spell of warm and sunny weather. 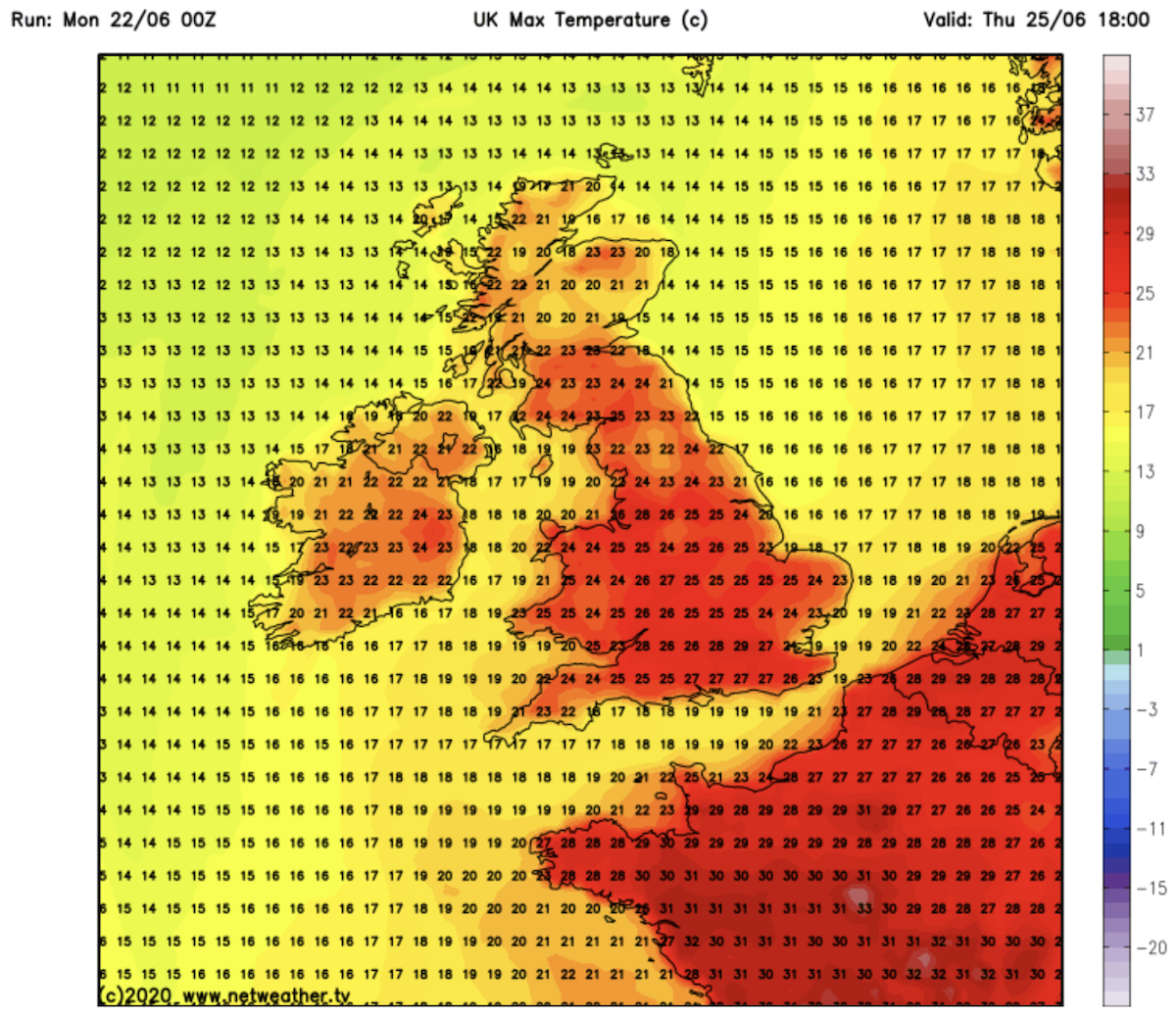 Mr Suri said the hot spell is caused by a plume of hot air moving in from the Atlantic.

He said: “This Atlantic air will descend and warm up as it moves across the UK and this in combination with clear skies and strong late-June sunshine, we’re seeing temperatures rise.”

Weather charts show the higher temperatures will be seen in the south and by Thursday the whole of the UK turns dark red – symbolising the scorching temperatures.

But as the high temperatures start to engulf the whole of the country, the risk of thunderstorms increases. 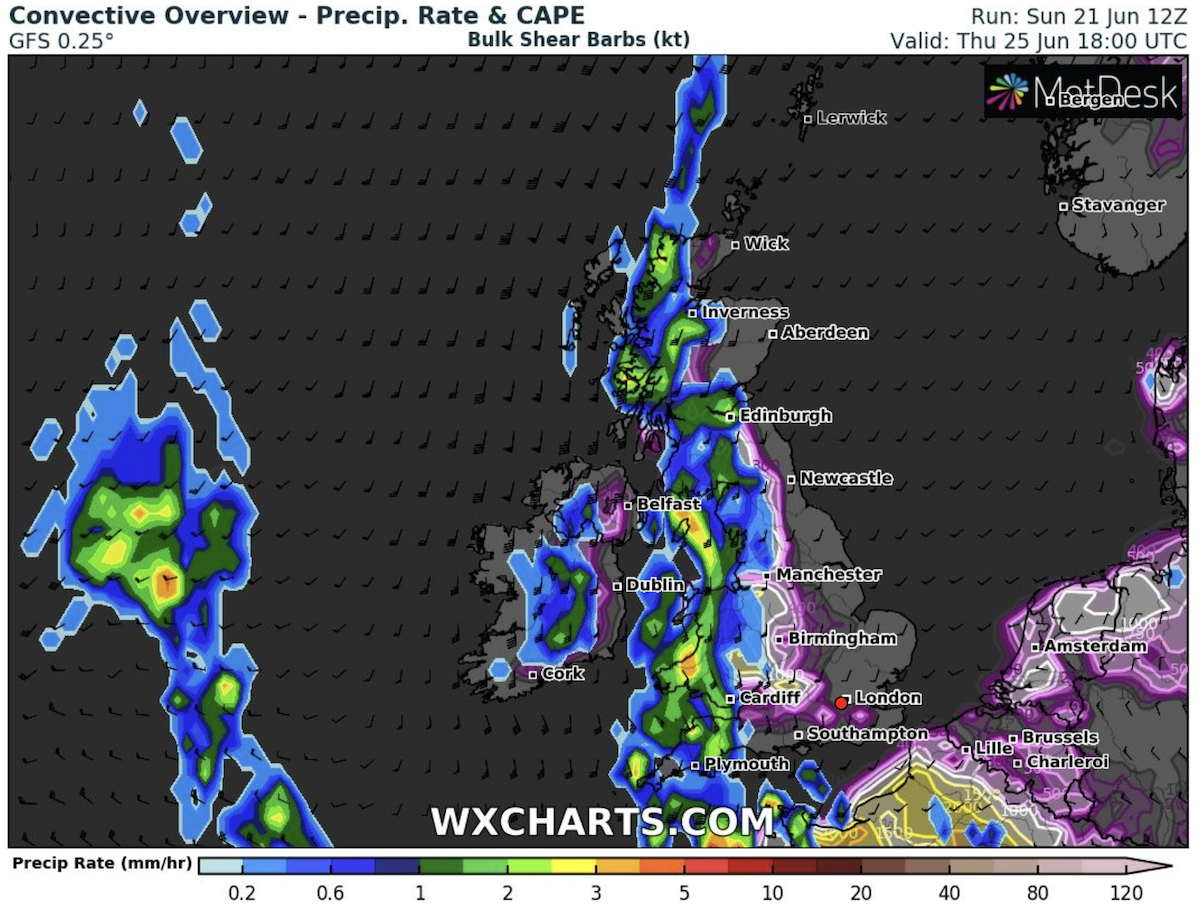 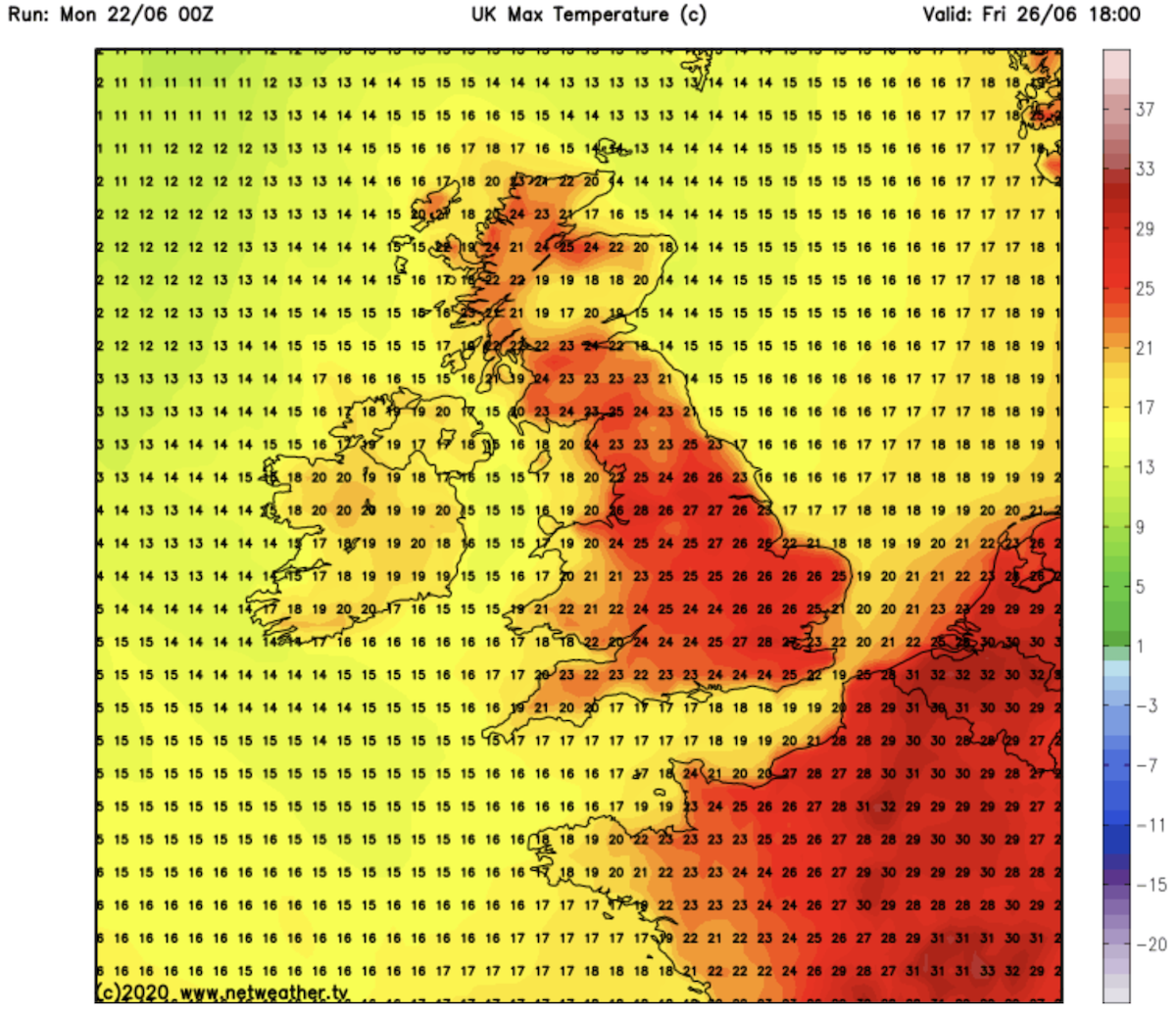 The Met Office’s Deputy Chief Meteorologist Matthew Lehnert said: “By Thursday, Northern Ireland and Scotland will join the rest of the country in seeing a shorter-lived spell of warm and sunny weather, but we’re also seeing an increased risk of thunderstorms towards the end of the week which is expected to bring an end to the very warm and sunny weather.”

Netweather forecasters predict northwest England has the greatest risk of thunderstorms on Thursday, spreading to western UK by late evening.

Friday will see more unsettled conditions for some – with the risk of thunderstorms increasing as the mercury remains high.

Jo Farrow, a senior forecaster at Netweather, said: “These thunderstorms would bring the risk of torrential rain, lightning, hail and gusty winds. 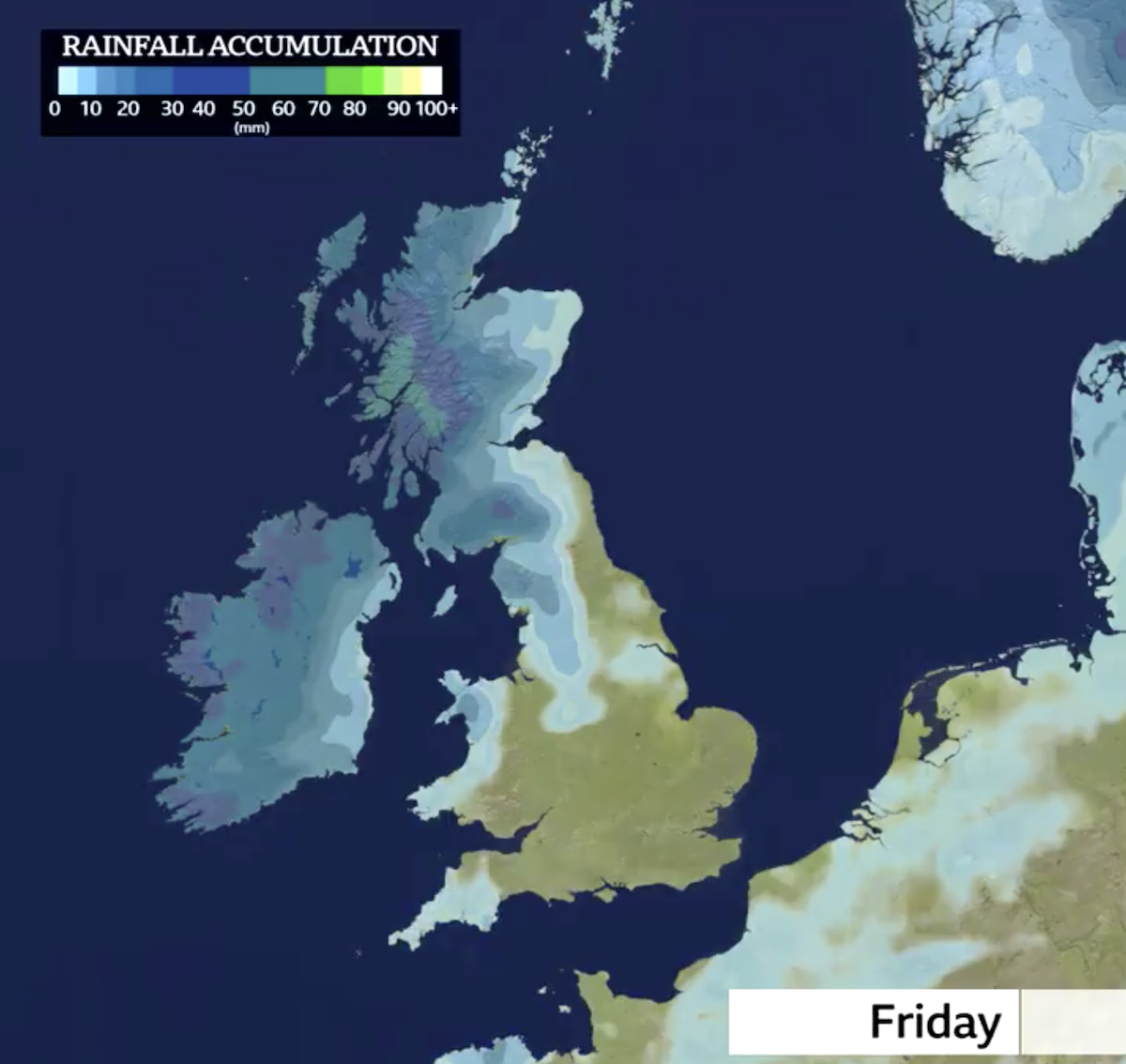 “They swing eastwards during the day and spread northwards by Friday evening.

“There is a lot of uncertainty for any detail, but the ingredients are there.”

Even if thunderstorms and heavy rain does come, temperatures are still set to reach the early 30Cs – spelling potentially muggy and humid conditions.

A Dunedin woman stalked her former landlord for nearly a decade, at one point couriering him a key to her home, a court has heard. Ngaire Teresa Wilson, 42, pleaded guilty to criminal harassment but argued a conviction would severely hamper her career aspirations as a taxi driver. Counsel Brian Kilkelly accepted a conviction would […]

BRASILIA (Reuters) – Brazil’s minimum wage will be increased to 1,039 reais ($258) a month in 2020, the government said on Tuesday, a higher level than it had previously forecast that will require even tighter controls on spending to ensure its fiscal rules are not broken. The new minimum wage, provisionally signed into law by […]

This is another News Portal > World News > From black swan to bubble: investors weigh coronavirus risks