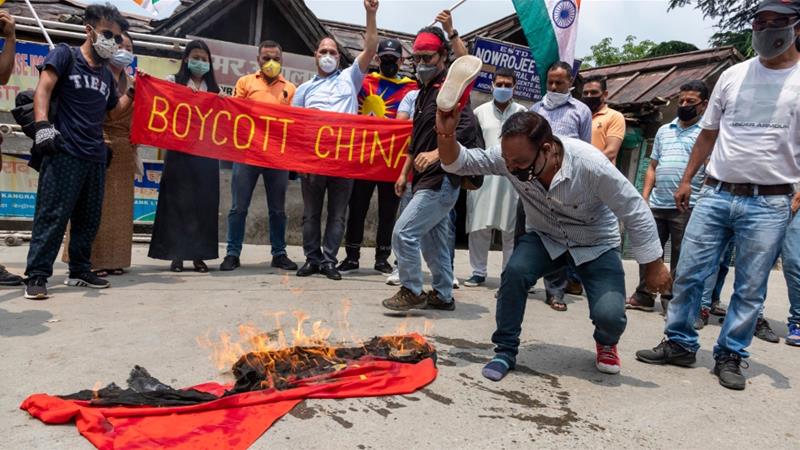 India’s prime minister has said the country is “hurt and angry” at the killing of 20 soldiers by Chinese forces in a disputed Himalayan border region, but appeared to downplay the incident in a public address, denying there had been any incursion into Indian territory.

“Nobody has intruded into our border, neither is anybody there now, nor have our posts been captured,” Narendra Modi said in a televised speech on Friday after he spent the day meeting representatives of parties from across the political spectrum in a bid to build consensus to tackle the rising tensions with China.

He assured political leaders “that our forces will spare no effort to protect our nation”.

China and India, both nuclear-armed countries, accuse each other of instigating the fight this week in the Galwan Valley. There is little evidence of what led to Chinese and Indian soldiers engage in the brawl on Monday. It was the deadliest incident between the two sides in 45 years, although China has not said whether it suffered any casualties.

Modi’s comments contrasted with his government’s earlier statements on the clash.

On Wednesday, Foreign Minister Subrahmanyam Jaishankar had told a senior Chinese diplomat that the dispute was triggered after “the Chinese side sought to erect a structure in Galwan valley on our side of the LAC”, according to a ministry statement, referring to the Line of Actual Control, the de facto border.

China on Friday maintained its position that India was to blame.

“The right and wrong is very clear and the responsibility lies entirely with the Indian side,” Foreign Ministry spokesman Zhao Lijian said.

On Friday, a source told Reuters news agency that despite daily meetings between Indian and Chinese military officials at the LAC, “the situation remains as it was, there is no disengagement, but there is also no further build-up of forces”.

Modi spoke following a three-hour all-party meeting. He held a virtual meeting with the heads of more than a dozen top opposition parties.

Sonia Gandhi, the chief of main opposition Congress party, questioned whether intelligence failures had allowed China to build up forces in the area.

“Does the government not receive, on a regular basis, satellite pictures of the borders of our country? Did our external intelligence agencies not report any unusual activity along the LAC?” Gandhi asked.

She added the “entire country” would like assurances that China will move its forces back to the LAC. Other opposition leaders echoed her call.

Defence Minister Rajnath Singh denied there was an intelligence failure on the part of the army.

While both sides have said they favour a resolution through dialogue, anti-China protests across India and domestic pressure on Modi may make it difficult to calm the situation without more concrete action.

A movement to boycott products from China, India’s largest trading partner, has gained momentum since the clash.

Authorities have cancelled a railways contract with a Chinese firm and at least four Chinese firms involved in other Indian projects also stand to lose business.

Meanwhile, state-run telecom firms have been told to forego Chinese telecommunications equipment in favour of locally sourced material for upgrading 4G mobile networks, Indian media reported, while a major traders’ body, the Confederation of All India Traders, has called for a boycott of Chinese goods.

Hours later, China denied it had detained any Indian soldiers.

India unilaterally declared Ladakh a federal territory while separating it from disputed Kashmir region in August 2019. China was among the countries to condemn the move, raising it at forums including the United Nations Security Council. India was elected to the UNSC this week.

LONDON (Reuters) – Britain’s government opened the first part of a 330 billion pound ($384 billion) loan guarantee scheme for businesses on Monday, which will help small and medium-sized firms borrow up to 5 million pounds to deal with coronavirus stoppages. “Any viable business” with a turnover of up to 45 million pounds would be […]

By Joyce Lee SEOUL (Reuters) – Hyundai Motor <005380.KS> and sister firm Kia Motors <000270.KS> will gradually increase production in South Korea from Feb. 11, the companies said in a statement on Monday. Hyundai last week became the first global automaker to suspend production outside China due to the coronavirus outbreak disrupting parts supply from […]

By Lawrence Delevingne BOSTON (Reuters) – A New York investment firm pitched wealthy investors in recent days on a way to make returns of 22% to 175% using U.S. government programs designed to help Americans keep their jobs and boost the coronavirus-stricken economy, according to a marketing document seen by Reuters. Following questions posed by […]

Crowded Lagos to ban motorbikes from most of Nigerian metropolis

Grant Bradley: The tourists are coming – what they will find