The Russian leader’s spokesman says Putin is protected from the coronavirus by disinfection tunnels for his visitors. 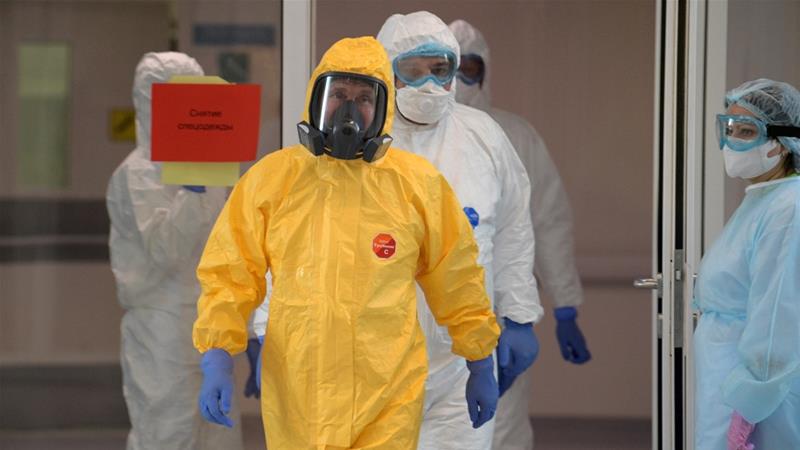 Russian President Vladimir Putin is protected from the coronavirus by special disinfection tunnels that anyone visiting his residence outside Moscow or meeting him in the Kremlin must pass through, according to his spokesman.

Dmitry Peskov said on Wednesday that one such special tunnel, manufactured by a Russian company based in the town of Penza, had been installed at Putin’s official Novo-Ogaryovo residence outside Moscow and two more in the Kremlin.

He said they were installed at the height of the pandemic in Russia, which authorities say is now on the wane, particularly in Moscow where lockdown restrictions are being lifted.

A few restrictions remained in place in the Kremlin, said Peskov, as precautions regarding Putin’s health continued to be justified.

Demonstration footage of the tunnel, published by the state-controlled RIA news agency on Tuesday night, showed masked people passing through it being sprayed with disinfectant from above and from the side.

RIA described the disinfectant as a fine mist that covered people’s clothes and any exposed upper body flesh.

Putin has spent much of the pandemic running the world’s largest country from his residence rather than the Kremlin, chairing video-conference meetings from a room that his critics dubbed a bunker.

Peskov said in April that anyone meeting Putin in person underwent testing for the coronavirus. A month later, Peskov said he had himself been infected.

Russia has recorded more than half a million infections, the third-highest number of cases in the world after Brazil and the United States, something it attributes to an enormous testing programme.

Russia has registered 7,478 deaths to date – a relatively low rate. Critics are dubious about the accuracy of its mortality figures.

By James Davey LONDON (Reuters) – Leading British fashion chain Next <NXT.L> has bowed to pressure from workers worried about their health and shut its online business, cutting off its remaining source of revenue during the coronavirus outbreak. Rival British retailer Marks and Spencer <MKS.L> has taken a different tack, maintaining its online operations and […]

PARIS (Reuters) – French Finance Minister Bruno Le Maire said on Thursday that he would soon present to President Emmanuel Macron various plans and options to help the country’s biggest companies cope with the coronavirus crisis, including possible nationalizations. “We have several options on the table for all of the major industrial companies which could […]

SYDNEY (Reuters) – The Reserve Bank of Australia (RBA) on Monday bought A$4 billion ($2.3 billion) in local government bonds as part of its quantitative easing program to keep short-term yields around the cash rate of 0.25%. It bought across maturities from A$891 million in May 2021 bonds to A$1.15 billion for December 2021 and […]